The Salty Pineapple offers a twist on classic Hawaiian grills 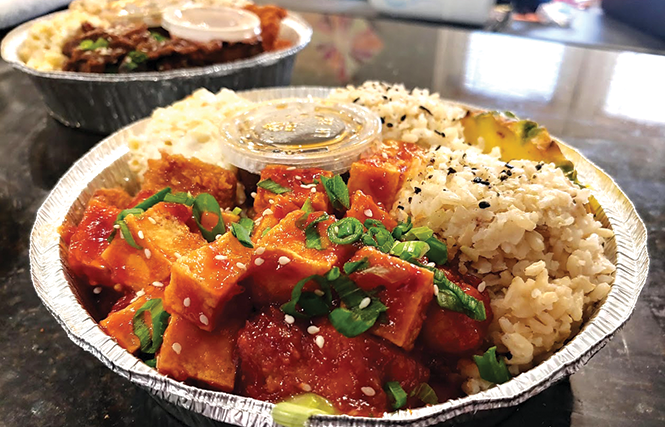 With the proliferation of Hawaiian grills that have popped up all over the state, you may have missed the arrival of The Salty Pineapple (13262 S. 5600 West, 801-890-0532, the-saltypineapple.com). Or maybe you've missed it because it's clear in the hell out in Herriman. Either way, this is a place that needs to be on the radar for fans of the Hawaiian trend that is sweeping the state—or for vegans and vegetarians who have yet to sample this flavorful cuisine.

The Salty Pineapple's recently-opened storefront is built upon a foundation of hard work, opportunity and one really big cash tip. Owner Daysha Filipe started The Salty Pineapple as a food truck in 2016, where she spent three years putting to good use the techniques she learned while helping her grandparents at South Jordan's Lanikai Grill. In 2019, The Salty Pineapple was featured on Food Network's Big Food Truck Tip, where host Andrew Zimmern awarded them with a $10,000 tip for their inventive Hawaiian menu. It was a huge boost to Filipe's operation, and she used the money to expand her food truck fleet and secure a spot for a brick-and-mortar location complete with a drive-through window.

When I tried the food truck for the first time, I kept it simple by ordering the double protein bowl ($10.95) with kalua pork and katsu chicken. Even when cooking on wheels, The Salty Pineapple's take on this traditional Hawaiian fare was above the bar—ender, slow-roasted kalua pork that melts in your mouth and katsu chicken that remains juicy and succulent within its crisp exterior. It's all served with rice and macaroni salad, garnished with an iconic slice of pineapple that makes sure you remember where your food is from.

Upon hearing that The Salty Pineapple had officially opened its storefront, I was eager to take a deeper dive into its menu. The restaurant offers nine different protein options, so getting two of the triple protein plates ($12.95) seemed like a good way to try most of the menu—six different proteins for around $25 is a hell of a deal. It also speaks to the creativity of Filipe and her team, who have ambitiously built several creative variations on top of the mainstays of kalua pork and katsu chicken. With two triple protein plates at my disposal, I decided to check out the coconut shrimp, teriyaki beef, pineapple jalapeño tofu and Pop's Sweet Garlic Chicken along with the pork and katsu chicken.

The surprise star of this meaty lineup was the teriyaki beef. It's easy for places that grill up their beef quickly to overcook the meat until it's on the leathery side, but that's not how Salty Pineapple rolls. These thin slices of marinated beef were just right—tender as first love, and seasoned to perfection. The sweet garlic chicken is a welcome variation on katsu chicken, which can tend to be one-note. Both the sweet garlic and pineapple jalapeño sauces lend tricked-out flavor profiles to Salty Pineapple's fried chicken, catering to those who like heat and those who don't equally. Adding some surf to the existing turf, the coconut shrimp are big, beautiful and liberally doused in a coconut breading before getting deep fried. The shrimp is tasty on its own, and dipping it into some of the pineapple jalapeño sauce is a wonderland of sweet heat.

Vegetarians and vegans interested in the Hawaiian experience can get fried tofu cubes tossed in sweet garlic or pineapple jalapeño sauces, which is a perfect meatless alternative. The beauty of the chicken dishes comes from the sauce, so dousing crispy tofu with either one of these sauces is enough to capture Salty Pineapple's flair for combining complementary flavors.

Each plate comes with the macaroni salad that is a Hawaiian staple, and I'm always a little upset at myself for how much I enjoy that mayo-heavy goodness. It evokes the picnic side "salads" that I grew up on, and it will always have a special place in my heart. Those familiar with the delights of Spam musubi ($3) can also get their fix at Salty Pineapple, and those who have yet to sample this bomb of a side dish need to shape the hell up. Spam musubi is a traditional Hawaiian snack that consists of grilled Spam ensconced within a cloud of sushi rice and wrapped with nori. It's a salty palate nuke that primes the taste buds for the incoming onslaught of grilled meat and rice. In sharp contrast, the guava cake ($3) is a screaming pink confection blanketed in whipped topping and guava jelly. It's a lovely way to end a meal that puts savory flavors on overdrive.

Food trucks are always hit and miss with me, but Salty Pineapple stood out by being consistently tasty and inventive. My inaugural visit to their storefront revealed that none of that has changed, and it's hard not to feel a little romantic about their success story.