Salt Lake City psych-shoegaze duo BYSTS charge out on their own. 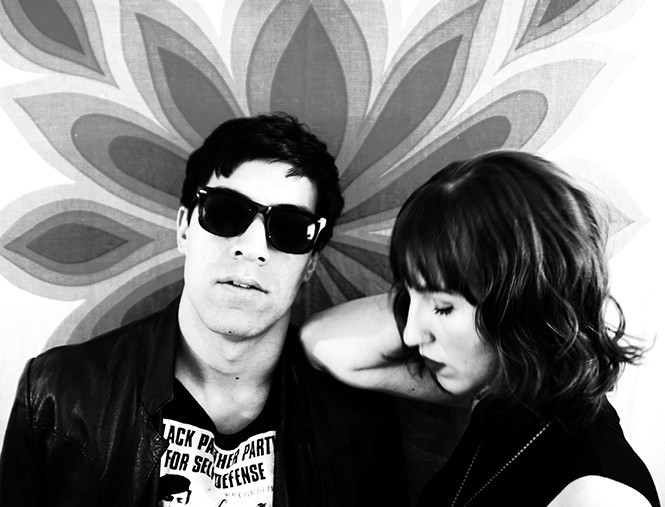 Offer Your Throat—the debut album from SLC's darkest of psych-shoegaze duos, BYSTS (pronounced "beasts")—is many things. It's a prismatic filtration of howling, reverb-drenched guitars. It's a dangerous sojourn into a sonic hurricane in search of the vocal harmonies within the storm's eye. It's also a testament to the DIY spirit that propels many indie rock bands of the digital age, as Bryan Holbrook (guitars/vocals) and Stefanie Marlow (bass/vocals) performed, recorded and mixed the album in a makeshift studio that they built at home.

"I would love to show people how we did it," Holbrook says. "But at the same time, I would also not love to do that—some of the stuff we used was pretty low-tech."

Interviewed during a camping trip deep in the woods of American Fork Canyon, the pair say they met while playing in different bands around Utah, then decided to work together as BYSTS. Once they had defined their particular sound—it exists somewhere within the aural hybrid of The Jesus and Mary Chain and My Bloody Valentine—they shopped some demos around and eventually captured the attention of New York's Echo Drug Recordings. BYSTS' first few singles, including a feverish cover of The Cure's "Killing an Arab," were impressive enough to earn them a spot at Canadian Music Week 2016. "We hadn't played live in forever, but it was a really fun experiment," Holbrook says.

Sharing the CMW stage with acts like Eagles of Death Metal and the Black Lips was the kind of jolt the duo needed to come alive as something more than a passion project. Armed with that and Holbrook's seven years of recording experience, BYSTS entered the studio hungry and focused, like a two-headed wolf. "One of the things we liked about recording was being able to do everything by ourselves," Marlow adds. "We always wanted things to sound a certain way, but it was hard to communicate that to others."

Independence was sufficient motivation for Holbrook and Marlow to become experts in budget recording equipment. "The research ended up being the most important part of the process," Marlow says. The majority of the equipment in BYSTS' home studio was assembled on a tight budget. Holbrook points out that many professional operations need to have gear that enables them to record different types of music. "Since we were just recording ourselves, I tried to figure out the least amount of stuff that we needed to get by," he says. That meant enduring snide comments from store clerks during his quest to find the right gear, but it was worth it.

Filtering the chaotic swell of their music through a studio built from cobbled-together technology makes Offer Your Throat come frighteningly to life. Like Mary Shelley's Frankenstein and Bram Stoker's Dracula, BYSTS' debut album rises—from an electrified platform, or from coffin dirt—and charges forth with revenous ferocity. The songs find Holbrook and Marlow trading off on vocals, and range from fuzzy, pumping squalls ("Need," "Killer on the Road") to hypnotic and perilously sensual mid-tempo numbers ("Night," "Speed"). Each boils and bleeds into the next, like a pulse-pounding night that won't end. It's an exhilarating listen.

Victor Frankenstein and Vlad Dracul might have said you can't argue with results—no matter how they're achieved. It's not just about having the tools, no matter how inexpensive or primitive, but the discipline and vision to see the project through to fruition. "You just have to keep at it," Marlow says. "It's very satisfying to know you have complete control," Holbrook adds. "But it's a lot of work at the same time."

Upon returning from their escape into nature, Holbrook and Marlow plan to work on their live performance. The first of several summer shows happens next Friday at The Garage on Beck, where BYSTS will share a bill with legendary psychedelic supergroup Spindrift, which includes members of The Brian Jonestown Massacre and The Warlocks.