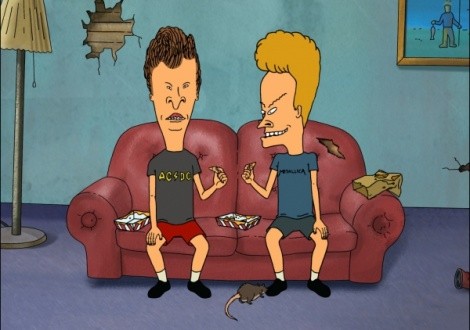 Series Return: The new Beavis & Butt-head will be just like its original 1993-97 incarnation—and not at all. Back then, B&B just pissed on music videos between moronic misadventures; today’s MTV (and this new “Internet”) has so much more to mock. Creator/main voice(s) Mike Judge is untouchable as a commentator on pop culture gone stupid, and unlike the horribly executed revival of the similarly beloved ’90s ’toon Ren & Stimpy in 2003, Beavis & Butt-head 2.0 gets it right. Finally, an educational program that aging Gen-Xers and their children can watch together.

Season Premiere, Series Debut: It makes sense that NBC is burning off the fifth and final season of Chuck on Friday nights; there’s a built-in audience of fans who, for some reason, haven’t given up on the spy comedy yet and want to see how it ends (my guess: Chuck’s head explodes while upgrading his brain Intersect to Windows 7). But scheduling the new Grimm against Fringe and Supernatural? That’s like programming Blue Bloods opposite The O’Reilly Factor and a luxury coffin infomercial—same audience, mutually assured ratings destruction, NBC. Too bad, because Grimm (co-created by Buffy the Vampire Slayer/Angel alumni) is scarier and more focused than ABC’s fairytale series Once Upon a Time, and it’s set in Portland—imagine the possibilities of a crossover episode with Portlandia!

Zombie Apocalypse
Saturday, Oct. 29 (Syfy)
Movie: First, a message to all you “zombie walk” organizers: If you keep staging these events, we’ll never know when the real thing is happening—and then it’ll be too late! Knock it off! Same goes for all zombie TV shows that aren’t The Walking Dead, especially Zombie Apocalypse, Syfy’s lazy pre-Halloween offering. Shoot me in the head if you’ve heard this one before: A ragtag group of zombie-plague survivors on the run (led by Ving Rhames) battle brain-eating shufflers while searching for a rumored-but-unconfirmed “safe island.” Lame. Couldn’t Syfy have cranked out Super Squid vs. UltraBear in time for this weekend?

Allen Gregory
Sunday, Oct. 30 (Fox)
Series Debut: Despite the “edgy” branding, Fox’s Sunday-night cartoon block is all about traditional middle-class families and, in most cases, their talking dogs/aliens/neighbor bears. Allen Gregory not only has two gay dads(!), but also an upscale loft home(!!) and no non-human characters (unless you count the voice of French Stewart as Dad 1). The gag is that Allen Gregory (voiced by show co-creator Jonah Hill) is a pretentious, home-schooled 7-year-old who’s now being forced to attend public elementary, where you can’t have pinot with lunch and discuss last night’s Charlie Rose. Could have been annoying, but smart writing and Hill’s perfect delivery (like a more-grounded version of The Office’s Robert California, oddly enough) make Allen Gregory the best out-of-the-box Fox cartoon in years. Too bad it’ll be displaced by Napoleon Dynamite in January.

Rock Center With Brian Williams
Monday, Oct. 31 (NBC)
Series Debut: Now that the nightmare of The Playboy Club (and, locally, We Are Utah) is over, here’s NBC Nightly News’ Brian Williams with … more news? Lifestyle features? Handsome tips? Given the name of the show, a re-imagining of Don Kirshner’s Rock Concert? (Google—sorry—Bing it, kids.) Not really sure what Rock Center is supposed to be, other than yet another primetime newsmagazine whose only distinctions are Williams, his Ocean’s Eleven lineup of correspondents (including Harry Smith, Kate Snow, Ted Koppel, Meredith Vieira, Richard Engel, Dr. Nancy Snyderman, Matt Lauer, Natalie Morales and Ann Curry) and a Halloween-night debut (which would have been a better slot for Grimm, but NBC knows what they’re doing … right?).