The author of Beer in the Beehive discusses the local brewery boom in the decade since his book. 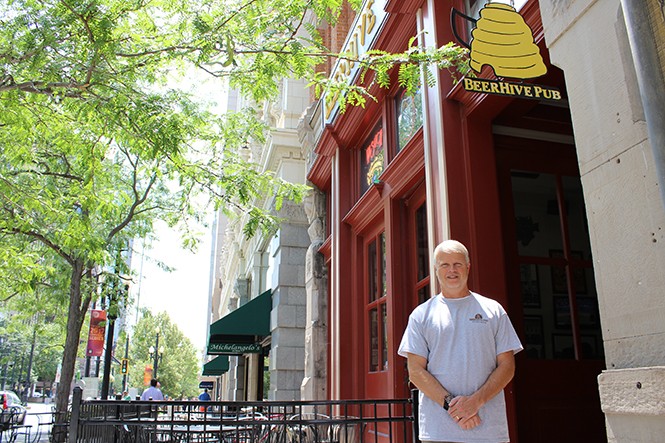 Del Vance, owner of the Beerhive Pub, wrote about the history of brewing in Utah in his book Beer in the Beehive, originally published in 2006 with a revised second edition in 2008. A lot has changed in the local beer economy in the intervening decade, so we sat down with Vance to ask about the book, and how local brewing has evolved.


Where did the idea to do the book originally come from?
The two major reasons for doing the book were 1. I like beer, and, 2. I like history. When I found out there was actually a history of brewing in the state of Utah—when most people think you can't even get an alcoholic beverage, let alone produce alcohol—I was amazed. So I just started digging around, looking at old papers and old photographs, and started to find out some of the actual history of the brewing industry here. I was just amazed to find out how big it was.

What happened to these businesses during Prohibition?
Businesses that had been around for 100 years were suddenly gone in a day. ... The ones that did survive had a little bit of a head start [when Prohibition was repealed], had the equipment, the recipes and the know-how for getting the product out into the market. Most mothballed their breweries and went into an entirely different kind of business. Fisher went into real estate; Becker went into poultry and pork products. Those were the only two that survived Prohibition in Utah, and when Prohibition ended, they had the most success until the resurgence of the craft breweries.

What was the initial response to the book?
The first edition sold out quickly, and then there were so many breweries opening, by the time I finished the first one, there were already three more breweries. Then I did a second edition in 2008, and that one's already completely out of date, with so many more breweries and distilleries. It was not even 15 years ago, and it's already completely out of date. So you can get it at a good rate now; I'm selling it at a hot price.

If you're honest with yourself, could you see this surge in local craft breweries coming?
At first I thought, like everybody else, that it was just a trend. Like most fads, it would kind of go away. Then after everybody kept saying that, but more breweries kept opening, and the craft beer market was growing 30 percent per year and the big domestic breweries were having negative growth, then I started thinking, maybe it isn't a fad.

The business plans are different now. The guys who opened Fisher, they haven't sold anything off-premises yet. Their emphasis is selling it right there and enjoying it right there at the brewery. That's the new trend. There's also a trend not to offer food, so the race is to see who can get the best food truck to park at their brewery.

What were the key changes to make this kind of growth in local craft brewing possible?
I've seen some articles where the Mormon population is slowly declining. But most of the growth is coming at the expense of the big guys: Bud, Coors, Miller. Their sales are declining, and craft beer is increasing. Some of it might have to do with more drinkers, but I think it's more that the people who do drink are just drinking better. They're tired of Wonder Bread beer. It's fun to explore how many different types of beer there are. For years, there was one type, and then the craft breweries came along, and people were like, "My God, beer actually has flavor."

Like with coffee, is it a factor that American's tastes have gotten more sophisticated?
There were always good restaurants, and there was always good coffee, but it was always targeted at an upscale market. Now, all of those high-end local cuisines, breweries, coffees are targeting everybody. They figured out that charging a lot doesn't mean you're necessarily going to make a lot more money. In years past, if you wanted a high-end alcohol, you had to pay a ton of money for it. Now there's so much competition, it brings down the price.

If you were going to do a new edition of your book now, what area would you focus on to emphasize what has changed in the last decade?
Well, first of all, it would be the size of the freaking Yellow Pages—there are so many breweries. And it would be out of date within another couple of months after printing it. But the main emphasis now is local and quality. People like supporting their local businesses. And beer is best fresh—it's not like wine or liquor, where you want it to age. It's kind of like going to the bakery where the bread is baked—it's so much better when it's fresh.