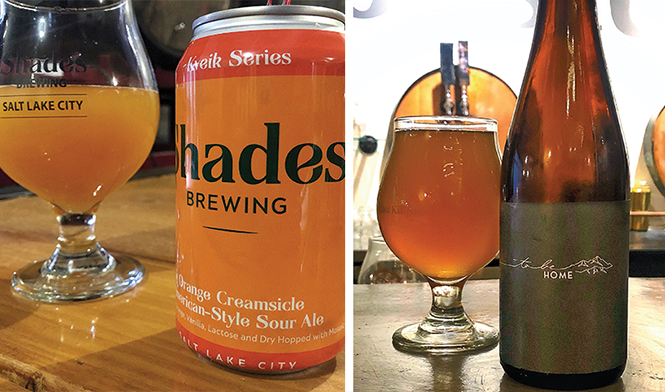 All this time at home has really got me in tune with my adolescent self. I've discovered quite a bit of ancient programming on the interwebs—and, sadly, it's affecting my perceptions of beer. Strap in, kids; this shiz is about to get shazbat, Mork & Mindy reference.

Toasted Barrel To Be Home: This beer was created in a very old-school way: by allowing the natural outside air to ferment the beer instead of inoculating it with cultured yeast. This ale spent a little time beneath a pine tree in a shallow basin known as a "cool ship." The resulting natural and wild fermentation created a sour and funky beer in a style that goes back centuries.

Right off the bat, you can tell that this is no normal beer. It has a pale gold hue with plentiful carbonation and light floating sediment. An aroma of dry, tart yeast comes at you first, with hints of raw grain, hay, mild funk, lactic acid, sour fruity notes, apples and subtle mustiness with an underlying earthiness. There's not much hop character to speak of.

It tastes of sharp, vague sour fruits, with notes of lactic acid, husky grain, hay and subtle funk. Next comes apple skin and a vinegary twang. The end has a vegetal mustiness and earthiness—very dry, with little bitterness observed. At 7.0 percent alcohol, it finishes pretty astringent, drying the palate and fostering an aftertaste of sour fruity notes, earthiness, grain, apples and subtle funk.

Quarantine Desirability Rating: This ale kinda reminds me of Marilyn from the old Munsters television show. It seems so sweet and innocent, but it's hanging around a real funky family of devilish flavors, along with a raw and somewhat untamed cast of craziness. Caveat emptor on this one: If you're not into the great unknowns of fermentation, take a seat. But if you gotta have the funk, get up and shake that thing over to Toasted Barrel for a bottle.

Shades Orange Creamsicle: Shades Brewing continues their onslaught of mimic beers. Just when you think that they've used up their arsenal of harmonious flavors, they hit you again with something surprising. This is a faithful representation of the favorite Creamsicle popsicle/ice cream treat. It looks great, with a nice, slightly darker orange color featuring a fair amount of haze and a fluffy white head that tends to disappear at a fairly fast clip. It's hard to retain a lot of foam with such a fruit-forward beer. No matter, you get big orange aromas from a beer that looks a hell of a lot like orange juice. The smell is luscious citrus with creamy orange peel, mango, passion fruit and vanilla.

The taste is a full-on fruit basket of sweet, juicy orange, tangerine and clementine. It has all of the fresh citrus components, but the fructose is sharpened by the tartness from the kveik base beer which helps keep the citrus from becoming overly sweet. The vanilla part is subtle and less pronounced than you'd find in the classic Creamsicle treat. Still, it is noticeable, and if you're a fan of the frozen confection, you'll really love this 6.5 percent alcohol take on it. Due to the addition of lactose, I would consider this beer not vegan-friendly.

Quarantine Desirability Rating: Ever watch Mutual of Omaha's Wild Kingdom and wonder, "Why is poor Jim Fowler getting cheetah-ravaged while that damn Marlin Perkins is all safe and chill behind the bamboo screen?" Well, if I were Marlin, and I was was suckin' down one of these Creamsicle kvieks, I'd probably let Jim die, too.

Unlike my taste in television, these beers are fresh and on point. As more restaurants and pubs open, they're picking up more beers like these, so keep your eyes on those beer menus. As always, cheers!