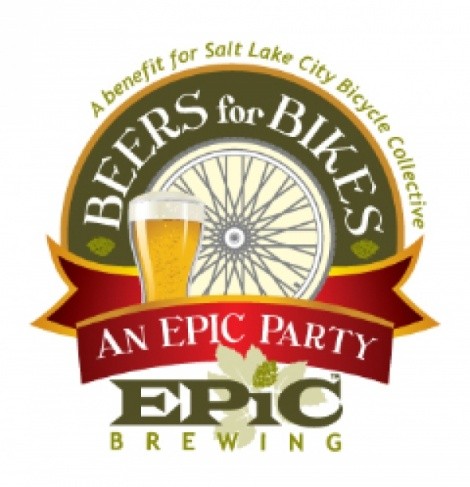 In Utah, and nationwide, microbreweries pair nicely with bike-oriented events and cycling teams. The marriage is partly about identity and joint interest, says Jonathan Morrison, Salt Lake City Bicycle Collective executive director. “Microbreweries fill a void in the community because people find identity and pleasure in them,” Morrison says. “Likewise, cycling fills a niche by answering where individuals go, who they hang out with and what they wear.” And, cyclists frequently crave a high quality, potent malt beverage after a hard ride, rather than buckets of light beer.

So, it’s a no-brainer—or, rather, a Belgian Brainless—for the collective to pair up with Epic Brewing Co. for the Oct. 23 Beers for Bikes fundraiser. Donations will help the bicycle collective continue to provide community-wide bicycle safety and maintenance education, cheap bikes to low-income individuals and the ever-popular bike valet, among other services.

When Dave Cole, Epic co-founder, went about crafting the soon-to-be biggest benefit for the collective, he wanted to start small. “This is the first time we’ve done this, and we’ve only been in business for a few months,” Cole says. “I’d love to make it bigger, have it yearly, and involve more breweries in the future, though. We’ll see.”

For the event, Cole, who also sits on the collective’s board of directors, is pulling some old favorites out from the cellar for a tasting of nearly 15 brews—3 ounces per serving with $1 tokens. But, before imbibing, join a bike parade, suitable for all fitness levels, from the brewery to Liberty Park and back. Then, DJs will provide ambiance while food from Poplar Street Pub, Vinto and other local restaurants fill bellies. Epic’s two fire pits will help revelers wind down after a day of bikes and brews. CW