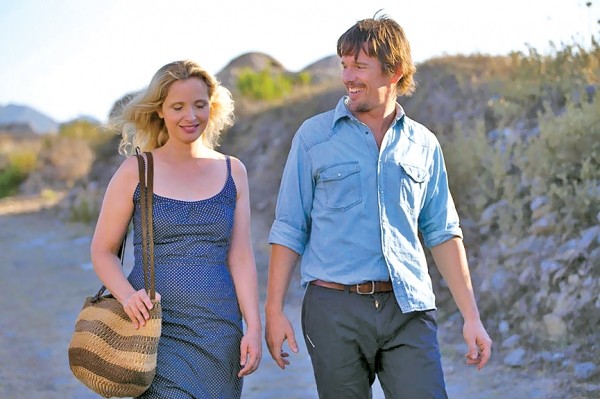 Editor’s Note: Includes spoilers for those who want no information about the setup for the plot.

There’s no point attempting to separate one’s response to director Richard Linklater’s third visit with Jesse (Ethan Hawke) and Celine (Julie Delpy) from those that came before—and indeed, you’ll miss the point of what’s so extraordinary about these films if you try to do so. In 1995, Before Sunrise introduced us to the pair as dreamy 20-somethings whose chance meeting on a train led to a single wildly romantic night in Vienna; in 2004, Before Sunset found them reuniting in Paris as slightly more hardened adults, in a way that completely reframed the events that occurred nine years earlier.

Before Midnight arrives not just as a sequel; it arrives as a sequel to perhaps the most brilliantly conceived sequel in modern movie history, and a sequel to the story of two characters who have become deeply and profoundly real to movie lovers who have followed them. So, yeah, no pressure.

What’s so extraordinary about Before Midnight is that, in a sense, it goes exactly where you might have expected it to go, yet still feels like a revelation. Nine more years have passed since Jesse missed a plane in Paris at the conclusion of Before Sunset, but this time, Jesse and Celine have spent those years together. A vacation in Greece has allowed Jesse to spend part of the summer with his son from his first marriage, but the boy’s return home is a point of tension between Jesse and Celine—still unmarried, but raising twin daughters together.

Like the films that preceded it, Before Midnight includes plenty of time just spent following Jesse and Celine as they walk and talk, or drive and talk, or sit in a hotel room and talk. Conversation has been a fundamental part of this trilogy, and the familiarity between Hawke and Delpy makes for interplay that’s often caustic and prickly, but also considerably funnier than in either of the previous two thanks to the terrific script by Linklater, Hawke and Delpy.

Yet it’s not just familiarity with the characters that makes the film resonate so deeply. Unlike either of the previous two films, Before Midnight spends time on Jesse and Celine interacting with other characters—the host and other guests at the Greek villa where they’re vacationing—as well as on their extended duologues. Those scenes prove crucial to where Linklater and company are taking us in this chapter, specifically as we hear the story of another pair of young lovers whose chance meeting echoes that Before Sunrise encounter. Their story had a rather different arc than Jesse and Celine’s, however, and it becomes clear how much of the way Jesse and Celine’s relationship played out is a function of the specific time when their story took place.

And time, it seems, is the unacknowledged third principal character of these films. In much the same way that it worked in the similarly transcendent Toy Story trilogy, the passage of time in Before Midnight becomes a fundamental part of the connections between people. Even as Jesse and Celine get a glimpse of the other directions their lives might have taken had they lived in a different era, this trilogy is grounded deeply in who these people are at this moment in their lives. The often-tense exchanges find them struggling with the reality of their lives together as it emerged from an idealized sense in the previous films of what it might be. Delpy and Hawke both seamlessly capture in their performances the core of the characters as we’ve already seen them, as well as the strain of years on the starry-eyed dreamers they were 18 years ago, and perhaps wish they could be again.

So it’s not simply nostalgia that fuels the magnificence of Before Midnight, no matter how wonderful it is to be spending another two hours with Jesse and Celine; if anything, it’s the exact opposite. Here is what it looks like when people who have idealized a long-ago idea of one another settle into the hard business of being with another messy, fallible, real person. Before Sunrise was about romance; Before Sunset was about longing and regret. What Before Midnight reveals is that, for the first time in the series, we’re seeing a story about love.