The graceful moves of parkour are about more than showing off. 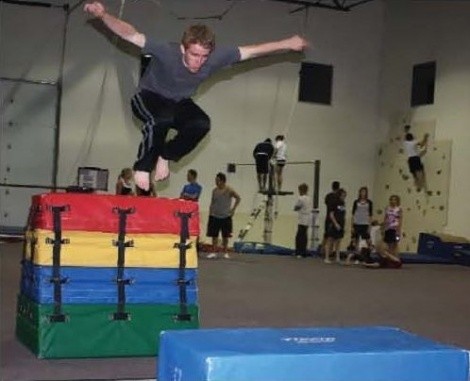 It began in France, and has since spread all over the world. Parkour started as a way of walking; for many, it has become a discipline, a philosophy and even an art form. Now, this discipline of using the world as one’s own personal obstacle course has moved big time into Utah.

Parkour—also known as l’art du déplacement, or “the art of movement”—is basically the act of walking along without stepping aside for anything. That includes rocks, walls, even skyscrapers. The guiding concept is for movement to flow like water, but without hesitation or diversion.

Some of its more extreme moves, like rooftop jumping between buildings, have been featured in films. Search the keyword “parkour” on YouTube and you’ll find dozens of breathtaking videos.

But, for everyday practitioners of parkour, it’s about scaling more down-to-earth terrain, like picnic tables or fences—even just walking along rocks and curbs.

Rocco Nicholls, 16, has been doing parkour for two years. “I like the freedom of being able to move around without needing a bike or skateboard. It’s not a sport.

Most people consider it more of an art. It’s not competitive. You don’t challenge each other or try to be better than anyone else. You just try to move your own way.”

The roots of parkour began before World War I, when Georges Hebert, a retired French military officer, visited indigenous tribes in Africa’s backcountry. Amazed by the graceful and fluid way tribe members moved through their environment, he brought their movement style back to France to be used as military training.

From there, it soon caught on among the civilian population. The basic moves were just running, jumping and rolling to absorb the stresses of a landing.

It was then advanced by French actor David Belle, now regarded as the founder of modern parkour. He gives credit to others, saying it was “... created by a few soldiers in Vietnam [as a method] to escape or run away from something chasing you; and this is the spirit we’d like parkour to keep. You have to [know] the difference between what is useful and what is not in emergency situations. Then you’ll know what is parkour and what is not. So, if you do acrobatic things on the street with no other goal than showing off, please don’t say it’s parkour. Acrobatics existed a long time ago before parkour.”

Another form, which purists argue is or is not parkour, is “free running,” named after the free flow of water. Free runners insert acrobatics into their parkour, doing flips and twists—sort of like James Bond meets gymnastics.

Nicholls says there are regular gatherings of groups taking a parkour walk. “As we get into summer, we hold ‘jams.’ They last from three to seven hours. People come and go during that time. If you want to take part, you just show up; there’s no real organization. We have new people come who have never tried it in their lives. We love having new people. Everyone goes at their own pace. It’s an awesome way to get in shape.”

“The park has a bunch of rubber tires, picnic tables and shredded bark landings. It’s a great place to start parkour and learn more advanced moves. Alone, it’s hard to grasp the parkour concept at first, but if you have someone there to help you, it’s easier. The way I teach is overcoming your fears, progressing slowly until you’re able to pull off the full movement.”

Bigelow’s sessions begin at 4 p.m. He says parkour will give anyone more self-confidence. Anyone who wants more information can contact him at bigbadbigelow@gmail.com.

Get Out Get Out ,