Official Competition gets uneven results out of satirizing the act of filmmaking. 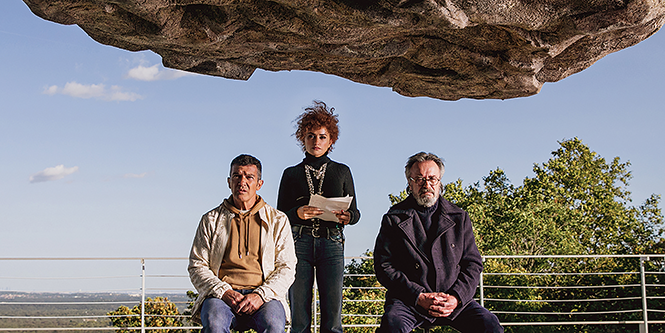 People who make movies clearly love making fun of people who make movies—and historically speaking, they've done a pretty fair job of doing so. Whether it's the Hollywood milieu of The Player or the indie-film world of Living in Oblivion, there have been more than a few quality examples of filmmakers taking the piss out of their own art form, threading the needle between acidic takedown and self-deprecation.

It might be a paradigm example of "write what you know," but it certainly does seem to help that the barbs in such films feel like they're coming from a place of familiarity. And that's part of what makes it odd when a movie like Official Competition seems to be so clunky in its mechanics, like the work of people who wrote a movie about movie-making based on the stories they heard from someone who used to know someone who worked in the movies.

From the outset, it feels a premise ripe with possibilities. Pharmaceutical entrepreneur Humberto Suárez (José Luis Gómez), staring down mortality on his 80th birthday, decides he wants to create something lasting as his legacy—and chooses financing a movie as the way to do it. He reaches out to celebrated filmmaker Lola Cuevas (Penélope Cruz), who wants to adapt a novel about the decades-long rivalry between two brothers. And as her leading men, she wants two icons: acting legend Iván Torres (Oscar Martínez), and successful movie star Félix Rivero (Antonio Banderas).

The bulk of the narrative involves the tension between Iván and Félix, which is fitting given the double-meaning of the title as referring both to the actors and to the desired slot at a major film festival. Martínez and Banderas easily could have gone over the top with their characters' respective sensibilities—Iván the serious Method actor, Banderas the celebrity who blithely believes in simply reading the words—but both opt for a little more restraint. Writer/directors Mariano Cohn and Gastón Duprat give them both great moments that play with all of the ways these two men are like oil and water, like their respective feeling about awards shows, or how they handle a love scene.

That component of Official Competition generally works; it's nearly everything else that feels only halfway thought out. Suárez, for example, could have been an interesting character trying to make sure this movie fits his conception of a great work of art, but he disappears for nearly the entire movie, reappearing only briefly to suggest that his daughter Diana (Irene Escolar) should be the leading lady. That subplot is similarly underbaked, missing the potential fertile ground of Diana being either a terrible amateur foisted upon the production, or surprisingly talented rather than a nepotistic obstacle. Even Lola is confusing as a character, her intensity and oddball rehearsal choices—like forcing Iván and Félix to perform while a literal boulder hangs above their heads—too rarely generating real comedic energy. It's commendable that Cohn and Duprat don't want to create stereotypes, but too often it seems like the alternative is that they created blanks.

What's frustrating is that at isolated intervals, the filmmakers find perfect little bits of detail to exploit for funny set pieces. The most memorable involves Lola setting up a test of Diana's romantic chemistry with Iván and Félix, surrounded by microphones, with a sound design that turns Félix's aggressive kissing into a cacophony of slurping noises. It's similarly a great bit when Lola attempts to coach Félix into the precise amount of drunkenness he should be conveying in a particular scene, evaluating it on a one-to-ten scale that leaves Félix perplexed. At least occasionally, it's clear that Official Competition can mine laughs from how absurd it can appear from the outside when people are trying to make what they imagine will be great art.

On the whole, unfortunately, that notion just doesn't deliver, right up to an ending that bails out on the most acidic resolution for something that feels weirdly incomplete. The most interesting conflict keeps getting jumbled up in toothless satire. We know that there are goofy things that a movie can show us about what it's like to make a movie; this one, unexpectedly, left me more interested in watching the imaginary movie these people were making.