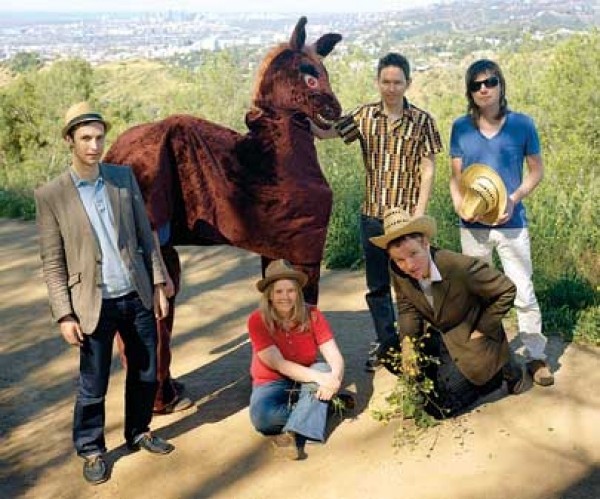 People sometimes get closer to their co-workers than to their family, simply because they spend so much time with them. And somewhere beyond the whole-fam-damily level of intimacy is the complicated sort of relationship the members of a band have with one another, which Belle & Sebastian drummer Richard Colburn says is akin to “being married,” especially when you’ve been working with most of the same musicians for more than 15 years.

While cellist Isobel Campbell and former bassist Stuart David (who was replaced by Bob Kildea) eventually departed the Scottish indie-pop band to pursue other projects, frontman Stuart Murdoch, violinist Sarah Martin, trumpet player Mick Cooke, pianist Chris Geddes, guitarist Stevie Jackson and Colburn have kept on through thick and thin since 1996 in a close, sometimes-frustrating musical relationship. “You kind of grow with each other, there are ups and downs,” Colburn says. Being in a band, he says, is “exactly like being married, but you’re married to a lot of people, and some same-sex as well ...” He laughs. “It’s been interesting.”

If the typically long breaks between Belle & Sebastian’s albums (their latest came out three years ago) could be compared to romantic partners taking time apart, then the upcoming August release, The Third Eye Centre—a compilation of B-sides, rarities and remixes—is like that shoebox every couple has of snapshots and ticket stubs. For Colburn, the album is a collection of mementos that “shows you how far you’ve come as a musician,” he says. The Third Eye Centre is also a way for the band to acknowledge their past work before going into the studio later this year to record a brand-new album.

Band founder Murdoch was diagnosed at age 21 with myalgic encephalomyelitis, or chronic fatigue syndrome, a debilitating illness that forced him to drop out of college and kept him from doing any physical activities. Over the next few years, as he slowly regained his strength and began writing the material that would become Belle & Sebastian’s first albums—Tigermilk and the monumental If You’re Feeling Sinister, both released in 1996—Murdoch took to Glasgow’s bus system as a way to experience the city he’d been isolated from.

“Stuart, he’s a huge fan of Glasgow and the surrounding area, so he used to write a lot of songs on the bus and just traveling from one bit to another, just using those journeys to kind of inspire his mind to come up with lyrics,” Colburn says. “There are a lot of geographical references as well.” For example, Sinister’s “Like Dylan in the Movies” is about walking alone in Glasgow’s Kelvingrove Park.

While Belle & Sebastian’s namesake is a 1967 French black & white television show, in the Pitchfork Classic documentary If You’re Feeling Sinister, Murdoch said he liked the idea of Belle and Sebastian being a fictional twee “hipster couple” who lived in Glasgow and created music together. Thus began Belle & Sebastian’s (the band) strong tradition of storytelling, as Murdoch wanted to write music about “normal people doing normal things, because I wasn’t normal; I was out of the game” due to illness.

Imagining themselves to be “Velvet Underground with a trumpet,” as Geddes says in the documentary, Belle & Sebastian’s trademark pop sound combines that keen-eyed storytelling with string-centric arrangements, ironically humorous lyrics, mellow guitar lines and ethereal vocals. The Third Eye Centre will feature songs from the eras of 2003’s Dear Catastrophe Waitress, 2006’s The Life’s Pursuit and 2010’s Write About Love; the latter two albums were recorded in Los Angeles, which gave them a “sunnier outlook on things rather than songs about here, written here,” Colburn says. The track list includes a remix of “Your Cover’s Blown” by Miaoux Miaoux and a remix of “I’m a Cuckoo” by The Avalanches.

But even if The Third Eye Centre evokes the warmth of California, Belle & Sebastian is intrinsically tied to the cloudy moodiness of Glasgow and its citizens who escape through their music. “I think a lot of people in Glasgow are a bit like that,” Colburn says. “Where [music] helps you lose yourself … it’s a kind of fantasy thing—get away from everyday life.”