Belle of the Balls

Whether it's boba or takoyaki, Quickly has a round-shaped snack just for you. 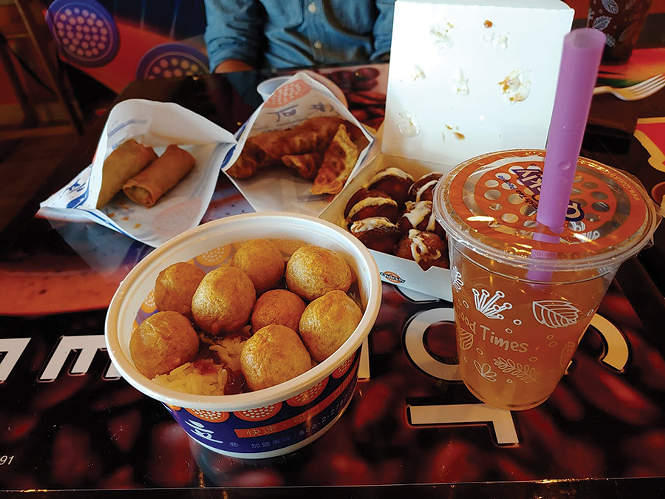 If a coastal dining fad like boba tea and smoothies makes its way to a landlocked state like Utah, you know it's become a permanent part of American dining culture. While drinking flavored tea loaded with slippery pearls of tapioca has lost a bit of its novelty as of late, boba joints like Quickly (3521 W. 3500 South, 385-274-4938, quicklyutah.com) have continued to find success in their business model. A big part of Quickly's success is its association with the Quickly USA franchise group, which opened its first store in Southern California in 2002. The early 2000s saw boba tea explode in popularity, and Quickly used this momentum to open several stores in California before setting its sights on other cities. It came to its West Valley digs in 2017 where it's been thriving ever since.

The rise and fall of the boba trend has left its mark on coffee shop menus all over the country. It's not hard to transfer the concept to other drinks, so it's become more common to see boba drinks at several local coffee shops. I've also seen it cross borders into DIY frozen yogurt shops where you can pile the stuff high on whatever dessert you've concocted. That said, there are a few telltale signs that the place where you're sipping on some whacked-out flavored tea, as you watch those chewy little orbs of tapioca slide up your straw, is one of the genre pioneers. For example, offering a drink menu that completely dwarfs the food menu is a sure sign that you're in a place that knows what it's doing. Quickly's menu starts off with around eight drink bases, from fresh tea ($1.50) to the more tricked out panda milk tea ($3.50). From there, you can choose flavor combinations from a list that contains lychee, taro, peppermint and other more familiar fruits—all of which comes before you pick what flavor of boba or jelly you'd like to add.

Honestly, a drink menu of this magnitude throws me for a loop. When I see a menu with such mind-boggling potential, I tend to get distracted with all the strange combinations that I could order. Quickly maintains a steady flow of customers, so in consideration of the line behind me, I shot from the hip and got a green tea with mango and some lychee popping boba ($2). I like a place that can supplement the grassy green tea flavor with the right amount of sweetness, and overall, this was not a bad drink for an increasingly hot summer day. Those who are really thirsty will want to upgrade to a chubby for $1.50 more—just remember to keep a straight face when you place your order.

I'd suggest hitting up Quickly primarily when you're in the mood for something slightly textural and weird to drink, since their menu of snacks and rice bowls is not as inventive as their drink selection—though it does share a certain spherical cohesion. Fish balls, shrimp balls and takoyaki—octopus balls—are the stars of the menu. Golden brown and topped with sweet teriyaki sauce and creamy mayo, all these balls are good balls. Their snacks come in wax paper bags or cardstock boxes, which lends a fast food aesthetic to the bulk of the menu. Since everything is deep fried, it only seems appropriate.

The rice bowls ($5.99) are little more than a gigantic wad of white rice topped with whichever fried balls you'd like, along with the option to choose grilled teriyaki chicken or fried popcorn chicken—which is still vaguely ball-shaped. They throw on a bit of sauce for good measure, but I'd suggest getting whichever fried snack sounds best and ditching the accompanying bowl of rice. In most rice bowls I have known, rice can be a good starchy complement to most any dish, but here it just gets in the way.

The most notable edible on the menu would have to be the Spam musubi ($1.99), an unapologetic Hawaiian delicacy that mixes canned meat with a sushi-like preparation—it's the perfect middle finger to sushi snobs worldwide. I've had this once or twice before, and I have to say that the musubi here is among the best. Here, the excess rice is necessary to help tamp down the saltiness of the Spam and the teriyaki sauce, creating balanced, sweet-and-salty bites throughout the experience. In a menu replete with weird choices, you'd almost expect this peculiar Hawaiian export to make an appearance—I'll leave it up to the individual diner to decide whether this is a good or a bad thing.

Overall, Quickly is ideal for a quick stop for an inventive—and reasonably priced—beverage, but there is some definite charm in being able to order up some egg rolls or pot stickers in a to-go bag for the road. It's also perfect for that person in your life who loves their food deep-fried and spherical. I'm sure they exist. Somewhere.