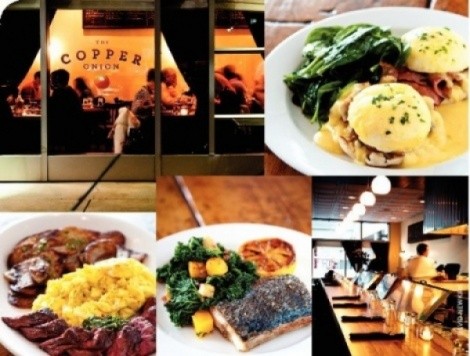 Looking back on 2010, I think it’s safe to say it was a good year locally for dining. New restaurants like The Copper Onion, Forage and Sea Salt rebooted the dining scene, while stalwarts such as Grappa, Metropolitan and The New Yorker kept chugging along with their usual excellence. And, for their rabid fans, this was the year that In-N-Out Burger finally landed on the Wasatch Front. I enjoyed many a fine meal in 2010, from perfect pizzas at Maxwell’s and marvelous momos at Himalayan Kitchen and Kathmandu to Rancho Market’s massive, messy molcajete, great gyros at Greek City Grill and the bodacious burger at Spruce. Here are 10 memorable meals from the past year of eating out; I only hope 2011 will be as tasty.

One might not expect to find world-class cuisine in Midway, but that’s exactly what chef Eric May is producing every night at the Blue Boar Inn. Lamb sweetbreads with caper-and-sage brown butter sauce; Dijon-crusted wild boar chops; and his hearty cassoulet made with homemade duck confit, Great Northern beans, smoked sausage, house-made pancetta and herbed bread crumbs are reason enough to visit Midway.

From the ricotta dumplings that were on the opening-day menu to last week’s bone marrow with toasted homemade bread and house-made pickles, I’ve probably enjoyed more good meals at The Copper Onion than any other single restaurant this year. Serving simple fare like a bite of Gran Biscotto cured ham or a more complex tombo tuna filet, sautéed and served with burnt lemon, kale, julienned Niman Ranch bacon and root veggies, Ryan and Colleen Lowder’s downtown eatery was a wonderful gift to Utah foodies in 2010.

I don’t look for boundary-breaking cuisine here, but when I’m in the mood for a solid, rib-sticking meal and a game of American shuffleboard, I frequently wind up at MacCool’s. It doesn’t get much better than the lamb spareribs with chipotle-blue cheese sauce, and this is the only place I know of where I can get corned beef and cabbage, made from scratch, every day of the year—not just on St. Patrick’s Day.

I’ve had many magnificent meals at Metropolitan, but I don’t recall liking anything there better than the Arctic char, with stock made from the body of the char, which is then used to stew white beans. A boneless piece of skin-on Arctic char is pan-seared until the skin is crispy and served in a bowl atop rosemary oil-infused white beans, and finished with shaved fresh black truffles. And that’s just one of many delectable dishes at Metro.

At Naked Fish Bistro, divine dining options range from slivers of amberjack garnished with myoga ginger buds and steamed black edamame to delicious cooked items from chef Tosh such as tender robatayaki lamb chops and Miyazaki prefecture Wagyu beef. And, it’s all dished up in a hip, sassy atmosphere by an excellent service staff.

With the recent opening of his Sea Salt restaurant, owner Eric DeBonis has rededicated The Paris Bistro to, well, Parisian-style bistro food. He and chef Emmanuel knocked it out of the park earlier this month with a Latour wine dinner menu that featured dishes like escargot and chestnuts in puff pastry, raviolis “coq au vin,” housemade p%uFFFDte de campagne, celery root and chestnut soup with duck foie gras, and baked oysters with Vermouth buerre blanc and sturgeon caviar. Whew! This dinner was mind-blowing and the single best Utah meal I had in 2010.

About dim sum, the saying goes: You win some, you lose some. But, not at Red Maple, where authentic Cantonese-style dim sum is the order of the day and everyone wins. Steamed pork buns, eggy custard tart, shrimp shu mai dumplings, boiled tripe soup, barbecued spareribs, sesame balls, congee, turnip cake, steamed chicken feet … these are just a few of the glorious dim sum goodies at Red Maple.

Any place that can make me love a shrimp po’boy without a glass of beer on the side has got to be good. And, Spoony & Nata’s certainly is. The jambalaya and gumbo seem straight out of New Orleans, and even something as simple as fried catfish is a wonder to behold at this homey and friendly little Cajun-Creole eatery.

Longtime Park City chef John Murcko has found a home at Talisker on Main, where he wows guests with creations such as lobster hushpuppies, Rocky Mountain elk tenderloin carpaccio, “twice-cooked” striped bass with black olive oil, and his short rib “shepherd’s pie” with potato brulée and creamed corn. T on M is open to the public, but feels like your own private club.

Sadly, two of my favorite dining spots this year were shortlived: Moxi Bistro and Donovan’s Steak House both closed. But, in 2011 I’m looking forward to meals at brand-new places like Ken Rose’s (Tiburon, Epic Casual Dining) Wild Rose, Silver in Park City with the return of chef Todd Mark Miller, a bar and food concept from The Copper Onion, a new setting for Café Madrid and the spare-no-expense Montage at Empire Canyon in Deer Valley. Why, I’ve heard that even our international airport is getting a major food overhaul, and it sounds like it’s going to be delish. Stay tuned. Happy New Year.