Best of the Wurst

Rediscover your love of sausage fests at downtown's Beer Bar. 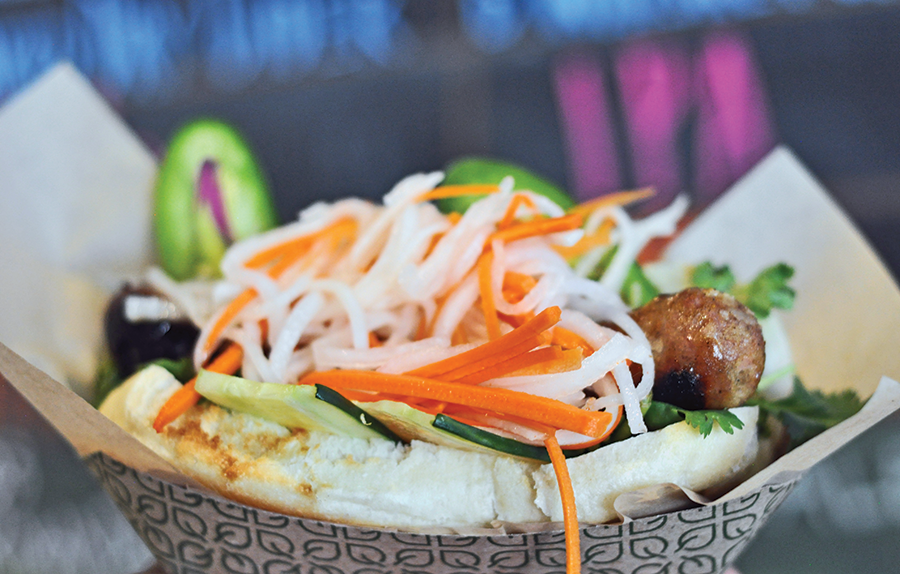 I'm a bit of a novitiate when it comes to beer, but I'm quite well-versed in the food that one typically consumes with beer. Whenever City Weekly's Utah Beer Fest rolls around (mark your calendar for Aug. 17 and 18 at the Utah State Fairpark), it usually means that I get to spend a good amount of time with the edible all-stars of das biergarten. To prepare for this hoppiest of occasions, I've set my sights on the selection of legendary bratwursts from downtown SLC's Beer Bar (161 E. 200 South, 385-259-0905).

Brats and beer have been simpatico for as long as anyone can remember. It's likely that German brewers started slapping 'em on the menu as a salty treat to encourage patrons to guzzle more beer, but their relationship has evolved into something much more nuanced. There's an alchemy that happens when beer and brats are consumed together—both flavors tend to complement one another on a level that you just don't get anywhere else. And it was this symbiosis that brought Beer Bar to life.

After purchasing Bar X, Richard Noel, Duncan Burrell and his brother Ty—yes, Modern Family's Phil Dunphy—became enamored with the concept of a beer garden and created Beer Bar in the adjacent space on Second South. Its menu was conceived by Viet Pham and Beer Bar's then-executive chef, Brendan Kawakami, both well-known culinary talents in their own right. And we have local carnomancer Frodebert "Frody" Volgger to thank for creating the brats themselves. His original recipes put the establishment on the map, and he continues to keep it supplied via Frody's Salt & Smoke, his South Salt Lake artisan meat shop. Every brat on the menu could be considered beer's best friend, but they also happen to be straight up knockouts all their own.

My very first experience with these fantastic creations was prompted by Katie Weinner of SLC Pop while writing a piece about local chefs and their comfort food staples. She has been a fan of Beer Bar since the beginning, and sharing one of her favorite low-key meals was enough to make me a lifelong fan, too. Since then, every time I've had a hankering for something simple yet transcendent, a visit to Beer Bar always satisfies. During my most recent one, I went for the Vietnamese-inspired banh mi brat ($12), which infuses the classic brat recipe with a hit of curry and tosses it in a bun with shreds of carrot and daikon along with some cilantro and sliced jalapeño for a bit of a kick. It's a definite win for fans of the copious toppings and textures found on a classic Chicago dog—also on the menu—but are after something a little different.

As much as I tried to resist wandering down this particular back alley, the cinnamon toast brat ($8) was next on my list—and why wouldn't it be? It's a chicken-and-apple brat on a cinnamon toast bun doused with lemon curd. Yes, that kind of lemon curd. It lacked the visual flair of the banh mi brat, and surprisingly enough, was a bit light on flavor as well. I was expecting to get a citrusy-sweet wallop from the curd, but the supporting cast of this brat was unexpectedly muted in comparison to its smoky leading lady.

If you're planning to venture into the other areas of Beer Bar's menu, the Reuben fries ($12) are a hidden gem within Utah's gastropub scene. As they are named after the hallowed deli sandwich, this stacked plate of fries comes topped with pastrami, melted Swiss, sauerkraut and Russian dressing. It's a gooey mess of lovely saline notes, lightly covered with the creamy, dreamy Russian dressing. It's by far one of the best plates of fries you'll ever have.

Once I finished my meal, I had a chance to meet up with Beer Bar kitchen manager Colton Naffziger, who was quick to recognize the continuing contributions of Volgger and Kawakami. "Brendan brought all the hits to the menu," Naffziger says. "I don't think he would be a chef if he wasn't trying to make things as eco-friendly as possible, and he really brought that to this place." Naffziger mentioned that Kawakami accepted a position at the recently-opened Post Office Place, though the two still collaborate. "[He] has a lot of integrity as a cook, and I think he had a lot of confidence in me to take over," Naffziger continued. "He's like my mentor, so I call him all the time, even if I'm making something at home." On the subject of Volgger's brat-making prowess, Naffziger's voice takes on a more somber, almost reverent tone. "He's a legit badass chef, and he's this larger-than-life character," he says of the Austrian charcutier.

Whether you're gearing up for our annual beer bash or just in need of some serious pub therapy, Beer Bar is one of Utah's finest places to enjoy a menu that is audacious enough to put lemon curd on a bratwurst and accessible enough to recognize how much fun an experience like that can be.


AT A GLANCE
Open: Monday-Sunday, noon-2 a.m.
Best bet: Anything bratwurst-related
Can't miss: The Reuben fries are the acme of bar food