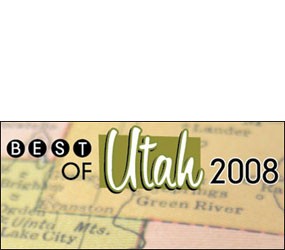 BEST POOL PREP
Pool ‘N’ Patio
Thinking about shaking up the old fitness routine? Try lap swimming. The first couple of sessions might be rough, with you floundering about in a bikini or board shorts that scream amateur to the many Masters sharks zipping past. No worries. Just amp up your game at Pool ‘N’ Patio, a local shop that specializes in home spa items and affordable swimming gear. At first, you might feel a bit like Albert Brooks shopping for jogging gear in Modern Romance—the fool stocking up on everything from a one-piece swimsuit to earplugs, chlorine-removing shampoo and a neat mesh bag—but you’ll return to the pool feeling like the next Amanda Beard or Ian Thorpe. Olympic podium, here you come!
2171 E. 3300 South, Salt Lake City, 801-485-5550

BEST KICKS
10
Walk into 10 on any given day, and you might find an employee detailing custom-made Nike kicks with the iconic Transformers logo. It’s just one of many perks to shopping at this local clothing store, specializing in old-school and (new) retro sneakers. Founded by Salt Lake City native Annie Hawkins, the store features merchandise reflecting her fashion sense as a professional soccer player—the intersection of form, function and serious street cred.
870 E. 900 South, Salt Lake City, 801-532-3997, The10Site.com

BEST ONLINE ARTISTS NETWORK
Artcotic.com
Sure, MySpace and Facebook are useful networking resources insofar as they improve your chances of getting laid or staying up on Will Ferrell’s latest YouTube antics, but artists who are serious about furthering their careers need more than 300 or so “friends” to get ahead. Salt Lake City-based Artcotic invites visual and performing artists to unite, share and sell their work. The site profiles contributing artists, including John Bell and Miss Derringer, with links to their portfolios. Whether you need a unique T-shirt or a jump on your future, Artcotic is bloody brilliant.
Artcotic.com

BEST TATTOO ARTS PROMOTER
C.J. Starkey
We don’t imagine it’s easy rallying tattoo artists around the world to register, schedule flights to, book hotels near and arrive on time for the Salt Lake City International Tattoo Convention. Artists are such an independent bunch. But convention founder C.J. Starkey pulls it off year after year: one of the coolest, most informative events in the state. Thanks in large part to his tireless work, tattoos are becoming increasingly accepted around these parts as a viable art form that often goes hand in hand with—gasp!— family values. It’s true. Starkey and friends go out of their way to make sure attendees’ children are safe and entertained while Mom and Dad get inked.
SLCTattoo.com

BEST SOURCE FOR NEW SOUNDS
Slowtrain
As any music fanatic knows, Tuesday is not just any other day. Tuesday means new CDs, DVDs and vinyl releases. Only at Slowtrain, customers don’t expect to find the latest Rolling Stones collection or Rhianna single. Now in its second year, the compact Broadway record store has established itself as the place to score material by more obscure artists including Panda Bear, No Age and Thao Nguyen, not to mention one-of-a-kind rareties. We asked owners Anna and Chris Brozek to order in several EPs by then largely unknown White Denim and they happily complied. Now the Austin group is all over the place, but Utah, you heard them at Slowtrain first.
221 E. Broadway, Salt Lake City, 801-364-2611, SlowtrainMusic.com