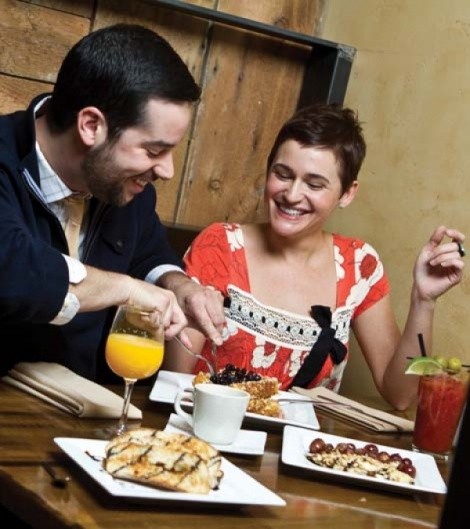 Eggs Benedict and applewood-smoked bacon have almost become passé on the local brunch scene: Everyone seems to have ‘em, including Pago. What separates Pago from much of the brunch bunch and, in part, what makes Pago such a popular brunch destination, are its more eclectic menu choices. For example, brunch dishes at Pago include croque monsieur and croque madame sandwiches; chicken hash made with pulled chicken, roasted corn, goat cheese, mascarpone, cherry tomatoes and Spanish onions; a vegan breakfast with scrambled tofu; Utah trout with Clifford Farm’s eggs; and a Morgan Valley lamb burger. Add to that a terrific selection of wines by the glass and you’ve got a recipe for a bodacious brunch. 878 S. 900 East, Salt Lake City, 801-532-0777, PagoSLC.com

The only combo that even comes close to blues and BBQ is sex and chocolate. And, after eating Pat’s Barbecue super top-secret dry-rub ribs, any carnal desire will be satiated, and that’s why it reigns supreme. What would sex be like with bibs and wetnaps? Who cares? But, you will need them for the mounds of sumptuous pulled meats, delicious greens and sweet beans. Once you’ve had your fair share, sit back and enjoy local bluesmen or the world-class acts that Pat’s is known to bring to town. 155 W. Commonwealth Ave. (2125 South), South Salt Lake, 801-484-5963, PatsBBQ.com
2. SugarHouse Barbeque
3. Q4U

Best Margherita Pizza
Settebello Pizza
This is the real deal. If you’re looking for the true flavor of Naples, look no farther than Settebello for your margherita pizza. Certified authentic by none other than Vera Pizza Napoletana, the margherita pizzas are made from scratch starting with Caputo 00 flour, just like in Italy, then topped with a light “sauce” of imported San Marzano tomatoes, fresh mozzarella and Parmigiano-Reggiano cheeses, extra-virgin olive oil and, finally, fresh basil, all cooked in 90 seconds in a wood-fired pizza oven capable of reaching 1,000 degrees. Mangia! 260 S. 200 West, Salt Lake City, 801-322-3556, Settebello.net

Best Salsa
Sonora Grill
At Ogden’s Sonora Grill, meals begin with great chips and salsa. The “chips” aren’t typical: These are whole, intact, deep-fried corn tortillas that need to be smashed into chips. But it’s the salsas that star. There’s a lively, bright-green tomatillo salsa that is delicious, and also a rich red salsa made with roasted morita peppers that has the perfect amount of zippiness, smokiness and depth of flavor to make it a truly world-class salsa. 2310 S. Kiesel Ave., Ogden, 801-393-1999, TheSonoraGrill.com

Best Desserts
The Dodo
Tequila cake, tollhouse pie, chocolate almond mousse pie and a rotating cast of buttermilk cakes are just some of the delectable desserts that pastry chef Ramon Montelongo served this past year. Montelongo’s creations are a big component of the restaurant’s success; head chef John Miller says they are among the restaurant’s highest revenue generators. There are a few perennial choices on The Dodo’s menu, but Montelongo rotates the dessert menu so there’s always something new. 1355 E. 2100 South, Salt Lake City, 801-486-2473, TheDodo.net
2. Gourmandise
3. Market Street Grill

Best Cheesesteak
DP Cheesesteaks
Drop into DP Cheesesteaks and you’ll swear you’re in South Philly. The sandwiches are the real deal, right down to the authentic, gloppy Cheez Whiz. If you’ve ever visited Jim’s, Geno’s, Pat’s or Tony Luke’s in Philadelphia, you’ll be pleasantly surprised at how spot-on DP (Downtown Philly) Cheesesteaks are. They’ve gotta be the best steaks this side of the Mississippi. And, you can round out your Philly cravings with TastyKakes, Birch Beer and Kerr’s potato chips. 1665 Towne Center Drive, South Jordan, 801-878-8450; 933 W. 500 North, American Fork, 801-763-0976, DPCheesesteaks.com

Best Flan-trepreneur
Horacio Vallejo, Sophiflan
If any self-respecting Mexican baker can proudly flaunt his flan, it’s Horacio Vallejo. Through his company, Sophiflan, Vallejo has mastered a tasty recipe for the traditional Mexican flan, so delicioso it’s offered in such fine eateries as the Blue Iguana and Gualberto’s or can be picked up at Herradura de Oro or Marissa’s Rancho Market on State. Vallejo has even put a new twist on the old classic by creating flavor varieties such as coconut, chocolate and even walnut. Bien hecho! 3590 S. Via Terra St., Salt Lake City, 801-262-3310, SophiFlan.com

Best Potato Chips
Bambara
There’s a lot to love on the menu at Bambara restaurant, where executive chef Nathan Powers works his culinary magic. His signature steak frites, lavender-seared ahi tuna and maple-brined porterhouse pork chop are all excellent. But Powers also rocks when he turns his attention to simpler matters, like potato chips, which are made from spuds cut in-house and fried to crispy perfection. But, to punch it up that extra notch, the golden brown potato chips are then sprinkled with blue cheese, turning an ordinary potato chip into an extraordinarily scrumptious snack. 202 S. Main, Salt Lake City, 801-363-5454, Bambara-SLC.com

Best Burger
Crown Burger
In so many realms of food, skill is proven through a balance of competing flavors, such as sweet and salty. Then, there are meals that demand a bold double-whammy of flavor, which is what the Crown Burger achieves with a savory hamburger patty and a savory stack of pastrami. Add cheese and lettuce for a decadent mouthful of burger that is fit for a king. Multiple locations
2. Acme Burger
3. Cotton Bottom Inn

Best French Fries
Crown Burger
There are two schools of thought when it comes to french fries: soft or crispy. Somewhere in the impossible nexus of those two fried opposites sits Crown Burger’s fries, works of art that perfectly straddle the two dimensions. But words alone cannot explain the tao of the Crown Burger—they can only show the path for discovering why Utah’s readers have once again given the restaurant the honor of “Best Fry.” Multiple locations
2. The Bayou
3. Training Table

Best Hospital Food
Davis Bistro
A bistro in a hospital? Are you kidding me? Nope. At the Davis Hospital and Medical Center in Layton, they take hospital food seriously. The Manhattan Deli serves sandwiches like the “Lady Liberty” wrap: oven-roasted turkey, bacon, lettuce, tomato, cranberry-pecan aioli and cheddar cheese in a whole-wheat wrap. The Grillery offers chicken strips and Mongolian-style stir-fried shrimp with Asian vegetables and soba noodles in a spicy Asian sauce. And, the Spotlite features low-calorie, low-fat selections such as cilantro-lime chicken skewers with pineapple salsa. Next time you’re in an ambulance, ask your driver for the Davis Hospital. 1600 W. Antelope Drive, Layton, 801-807-1000

Best Wine Festival
Sundance Resort
At the end of each summer, around Labor Day weekend, Sundance Resort throws Utah’s most delicious melding of food and drink. The scale of the Sundance Food & Wine Festival is perfect: not too big, but not too small, either. Typical winemaker attendees include Selby, Honig, Judd’s Hill, DeLoach and Altamura, along with many others. It’s a sunny, fun way to discover the wines you love while sampling excellent food from standout Utah restaurants. 8841 N. Alpine Loop Road, Sundance, 866-259-7468, SundanceResort.com

Best Carbo Load
Bruges Waffles & Frites
Pasta is the traditional go-to race fuel for runners and outdoor enthusiasts preparing for physical feats of strength. But you don’t need to be an athlete to appreciate the insulin rush that Bruges Waffles & Frites offers. Pierre Vandamme takes the quality-over-quantity route with a menu limited to dense Liege waffles, frites and Flemish beef stew (you might want to skip the latter before a run). The carb-heavy treats, savory and sweet, are equally satisfying post-finish line with extra dollops of whipped cream and aioli (because you deserve it). 336 W. Broadway, Salt Lake City, 801-363-4444, BrugesWaffles.com

Best Schnitzel With Spaetzle
Siegfried’s Delicatessen
Don’t let the lunchtime lines deter you; it’s worth the wait for Siegfried’s bratwurst, weisswurst, goulash, leberkaese, deli sandwiches and everything else served up from the cafeteria-style deli. However, a can’t-miss is the Wienerschnitzel: tender, thin pieces of breaded pork fried up to a golden-brown, crispy perfection. The only thing that could improve on the schnitzel itself is a side of German-style dumplings called spaetzle. With a dollop of Siegfried’s brown gravy, you’re in Bavarian heaven. 20 W. 200 South, Salt Lake City, 801-355-3891, SiegfriedsDelicatessen.biz

Best Vindaloo
Taste of India
At Layton’s Taste of India restaurant, the owners make their curries from scratch, not from prepared pastes, as so many of their competitors do. They cook their master sauces very slowly, allowing the spices, herbs, onions and other ingredients to mingle and for the oil to separate from the sauce before adding chicken, shrimp, lamb or veggies. The result is magnificent. To wit, the stupendous vindaloo curry sauce at Taste of India. The secret to this spicy and tart sauce, with incredible complexity and depth of flavor, is a judicious touch of vinegar. The result is vindaloo that you’ll come back for time and again. 1664 N. Woodland Park Drive, Layton, 801-614-0107, TasteofIndiaLayton.com

Best Soups
Soup Kitchen
The Soup Kitchen doesn’t take requests. Their soup menu is basic: clam chowder, chicken noodle, split pea with ham, broccoli cheese and so on. Their sandwich selection is similar, with mainstays like BLTs and sloppy joes. But add to those classic menu options the bonus that all daily specials include free fresh-baked bread sticks, and you’ve got yourself a winning formula for a reliable restaurant serving popular comfort foods to Utahns for more than 30 years. Multiple locations, SLCSoup.com
2. Zupas
3. Tin Angel Café