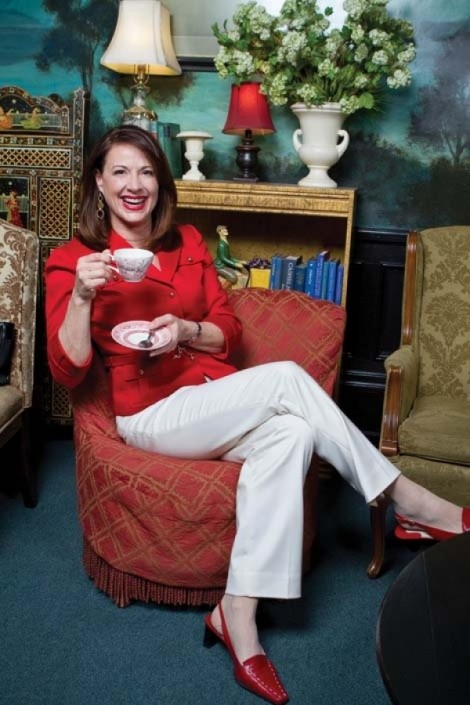 
Lucky 13! Hope Woodside owns this category, has for a decade plus three—and yet she still seems like the fresh-faced, enthusiastic anchor who first grabbed our attention when she joined Fox 13’s News at Nine in the ’90s. These days, viewers get an extra weekday helping of Woodside on the late-afternoon Live at Five newscast, a slightly looser format where her sense of humor pokes through the Serious News Anchor veneer on occasion. But, News at Nine is still the definitive nightly newscast for City Weekly readers, and it’s never quite the same when Woodside has the night off. Fox13Now.com
2. Karen Carlson, ABC 4
3. Kerri Cronk, Fox 13

Best TV Anchorman
Mark Koelbel, KUTV 2
The new Dick Nourse? Since nobody at the Revered One’s former home of KSL 5 has stepped up to fill the void at the anchor desk, KUTV 2’s Mark Koelbel is a logical heir apparent: Salt-and-pepper hair, square jaw, sly smile, authoritative delivery—plus, he has a genuine everyman charm that comes through when interacting with mere mortals, a quality most anchor gods lack. Even better, we know Koelbel has a hidden weird streak: His favorite author is Hunter S. Thompson. Connect2Utah.com
2. Dan Evans, Fox 13
3. Ron Bird, KUTV 2

Best Color Coordination
Karen Carlson & Robert Maxwell, ABC 4
Most news-anchor duos dress well, but how many actually dress like a team? ABC 4 evening anchors Karen Carlson and recent addition Robert Maxwell subtly coordinate the shades in their respective tops and ties to present a unified front of color that’s as effective as it is unusual. Sure, it helps to be, as Derek Zoolander would concur, “really, really, ridiculously good-looking,” but Carlson and Maxwell are also the best anchor team ABC 4 has had in years; solid presenters with glints of humor (at least, as much as you can get away with when your name isn’t Chris Vanocur) who don’t come across as cold or phony. If the color trick attracts some attention, win-win. ABC4.com

Best TV News Reporter
Chris Vanocur, ABC 4
Sometimes it seems as if ABC 4’s Chris Vanocur is auditioning for a gig on The Daily Show—and you know he’d kill, throwing it back to Jon Stewart with that lopsided grin that says “Yeah, I’m good—you just got newsed, baby.” But, for all of his goofy mannerisms and dramatic-halt speech patterns, Vanocur is the epitome of the serious field reporter who goes anywhere and everywhere for the story. His Sunday morning On the Record interview program shows him equally at ease bantering, chair-style. When he says it, you believe it; the smile is just a bonus. ABC4.com
2. Rod Decker, KUTV 2
3. Nineveh Dinha, Fox 13

Best TV Insight
Cristina Flores, KUTV 2
At a time when TV stations have cut their reporting staffs to the bone, the continued presence at KUTV 2 of Cristina Flores is a victory for good reporting. Flores brings to her work a mature compassion and humanity rarely visible on the tube, coupled with a natural camera presence. Whether she’s tackling scam artists, human-interest stories or the latest Harry Potter movie opening, her empathy and natural warmth make her segments stand out for both their gentle grace and clear insight.Connect2Utah.com

Best TV News Station
Fox 13
Not satisfied with just saturating the weekdays, now Fox 13 News has taken over Saturday and Sunday mornings, 7:30 to 9 a.m. Sorry, kiddies—you’ll have to get your Fox cartoons on Sunday night like the rest of us. Since shaking off Fox Corp. ownership in 2008, Fox 13 has only become more ambitious in programming and reach, adding more news hours per week that are actually pertinent and useful, as opposed to just blindly filling airspace to sell ads around. They do their job so well that we’ll even excuse the gratuitous American Idol shilling—just as long as Family Guy is on next. Fox13Now.com
2. KUTV 2
3. KSL 5

Best TV News Hottie
Nineveh Dinha, Fox 13
Since we’ve been to the Fox 13 News studios, we know there are no “Must Be Hot to Report” signs posted at the entrances. Still, Fox 13 seems to have more impossibly good-looking on-air talent than all of the other local stations combined—and few are referenced more often than reporter Nineveh Dinha. Could be sheer familiarity: Not only is Dinha omnipresent on Twitter and Facebook, she’s been all over the Fox 13 News schedule for three years, reporting (usually in blizzards) and substitute-anchoring whenever duty calls—though, thanks to her recent promotion to weekend evening news anchor, she’ll be easier to find on TV. Despite her obvious exotic “hotness,” Dinha is very much a newswoman to be taken seriously: Her Best of Utah win in this category last year is conspicuously absent from the long list of journalism awards in her bio. Fox13Now.com
2. Kerri Cronk, Fox 13
3. Debbie Worthen, KUTV 2

Best Weather Reporter
Damon Yauney, Fox 13
Good Day Utah weatherman Damon Yauney is approaching the 10-year mark on Fox 13, and it’s tough to imagine anyone else imparting Utah’s schizophrenic climate changes or cracking zingers as effortlessly as he does alongside anchors Kerri Cronk and Dan Evans. With his rarely blinking eyes and infectious on-camera energy, Yauney is like a meteorological Ren to Big Budah’s Stimpy in the morning—and who wouldn’t want to wake up to that? Fox13Now.com
2. Debbie Worthen, KUTV 2
3. Dan Pope, KSL 5

Best Radio Station
X96
It’s been a year of shakeups for City Weekly’s perennial Best Radio Station winner: Corey O’Brien went from nights to afternoons back to nights; Todd Nuke’Em jumped from mornings to afternoons; new DJ Marcy took his place in midday; longtime weekend warrior Portia Early walked, taking her local-music show with her; Saturdays and Sundays went pre-recorded. What hasn’t changed? Radio From Hell in the mornings and the station’s continually, perplexingly popular mix of ’90s grunge leftovers and current tight-pants yowlers. Still, no local radio station connects with its listeners like X96, and those listeners identify with X96 with familial ferocity—you can’t buy that kind of branding. X96.com
2. 97.1 ZHT
3. KBER 101.1

Best Public Radio Station
KRCL 90.9
Almost two years after community radio station KRCL switched from an all-over-the-place music/DJ format to a more standardized one with regular weekday programmers (now, including former City Weekly music editor Jamie Gadette in the mornings), it seems like the silent supporters outnumber the vocal detractors. Time may not heal all wounds, but it will shut them up. Good music is simply good music; given the choice between hearing the Black Keys a couple of times a week or the Red Hot Chili Peppers 56 times a day, smart listeners will choose the former. And, with all of the controversy over the daytime format, KRCL’s still-eclectic, high-quality nighttime and weekend programming is still firmly in place, as it has been for 30 years. KRCL.org
2. KUER 90.1
3. KCPW 88.3

Best Radio Show
Radio From Hell, X96
We’ve had to write about Radio From Hell’s Kerry Jackson, Bill Allred and Gina Barberi sooo many times here over the years (even they’re almost sick of reading about themselves—almost), we decided this was the occasion to shine the Best of Utah spotlight on “fresh-faced Mormon producer” Richard T. Steadman, aka Ritchie T. What you know: He has red hair, most of his teeth, and a disturbing affinity for improv and musical theater. What you’ve probably guessed: Working for Kerry, Bill & Gina can be as demanding as it sounds on the air. “Imagine trying to manage the expectations and predict the thought processes of three people at 5 in the morning and make it entertaining,” Steadman says. “But, when I’m able to just sit back and listen, I recognize that they’re the best.” X96.com/rfh/
2. Radio West, KUER 90.1
3. Maximum Distortion, KRCL 90.9

Best 168th Hour of the Week
Left of the Dial, KSL 102.7 FM/1160 AM
It’s difficult to understand why KSL Newsradio hands over two hours to Enid Greene (who barely has enough talent or opinions to cover 15 minutes) and three to rerun The Best of the Doug Wright Show (pity the intern who has to compile that) on Saturdays when it only gives Jeff Bell one—and then pre-empts it constantly for BYU ball. Well, that is, until you hear Bell’s Left of the Dial. In keeping with the show’s title, Bell has a more (eek!) Democratic bent than the rest of the KSL blowtorch, and he doesn’t hesitate to call BS on Republicans who deserve it. How to squeeze that much ripe material into 60 minutes, especially in bizarro 2010? Give Bell another hour, KSL—what are you afraid of? Saturdays 4-5 p.m., KSL Newsradio 102.7/1160, JMBell.org

Best Off-Air Comeback
Portia Early, UtahFM.org
When Portia Early left X96 after a long run at the “alternative” radio station, she did so discouraged and down—but not out. In fact, just three days after ditching her ever-dwindling time slot as X96’s Live & Local founder/host, she took her love of Utah’s music community to Web-based UtahFM and started a similar program spotlighting homegrown talent. Unsigned & Uncensored is arguably even better than Early’s original show, allowing her to air talent without worrying about pesky corporate interests or that darned FCC. She might be the exception to the rule, but sometimes it pays to take that job and shove it. UtahFM.org, Mondays, 3-6 p.m.

Best Keeper of the Jazz Flame
Steve Williams, KUER 90.1
Since becoming jazz music director for KUER in 1984, Steve Williams has been keeping the flame alive for jazz lovers in the Intermountain West. His voice is as soothing as a warm Snuggie, and his music choices are impeccable. And, his in-depth knowledge of jazz history, jazz music and jazz artists is remarkable. Plus, where else on the dial will you hear John Coltrane, Miles Davis, Diana Krall, Return to Forever and Art Tatum in the course of a half hour? Steve doesn’t just play jazz in Salt Lake City, Steve is jazz in Salt Lake City. Weeknights, 8 p.m. to midnight, KUER 90.1 FM

Best Missed Columnist
Rebecca Walsh
With the departure of Salt Lake Tribune columnist Rebecca Walsh last July to Italy, where she is now a consulate’s wife (you should see the view from her windows!), Utah’s “independent” daily lost an important voice. Walsh wasn’t afraid to question the power of corrupt politicians, the influence the LDS Church wields in Utah, questionable business practices or the attorney general. Walsh understood her readers couldn’t stand up against the powerful influences that shape and run this town, so she did it for them.

Best Reason to Still Pick Up a Newspaper
City Weekly
Hey, we beat out coupons and comics—probably because of the coupons and comics we carry. Thanks to our readers for showing us that print isn’t dead … just thrifty.
2. Coupons
3. Comics

Best Local Blog
Gavin’s Underground, CityWeekly.net
City Weekly recognized Gavin Sheehan’s photo-heavy blog when it resided on KUTV 2’s Website in our 2009 Best of Utah issue; his tenacity in covering local arts and music was all the more impressive because of the station’s utter lack of support or even acknowledgement of his work. Then, soon after our staff pick award for Gavin’s Underground, KUTV revamped its site into a news ‘n’ coupons hub and kicked GU to the curb. Fortunately, that curb is right across Main Street from City Weekly, so we adopted Gavin’s Underground for City Weekly.net, archives and all. Thanks for the extra hits, KUTV! CityWeekly.net/Underground
2. Dooce.com
3. BigShinyRobot.com