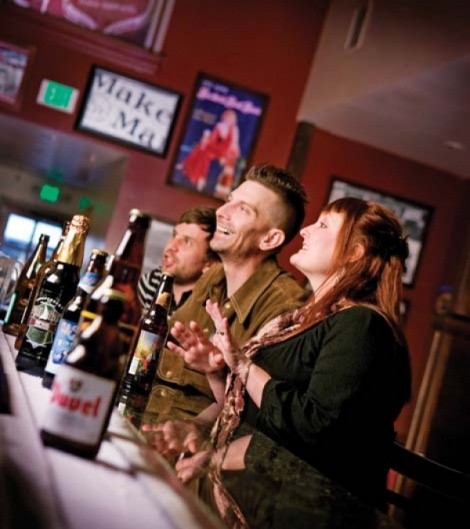 Wrapped inside a beautiful, historic facade, Utah’s newest beer emporium is an instant success. Though it may be remarkably unique, Beerhive’s frosty bar—it keeps your pints cold—seems little more than a pleasant gimmick, something to talk about for a minute with your date. Because, really, who’s going to let these delicious beers sit long enough on the bar to warm up? What really shines is the bar’s lengthy beer list, full bar and reasonable prices; emphasis on artisan beers; knowledgeable bartenders; great downtown location by TRAX; and, well, basically all the fundamentals of tavern mastery. 128 S. Main, Salt Lake City, 801-364-4268

Bonwood Bowl has been setting ’em up and knocking ’em down for 53 years. It is an institution that has surpassed being a simple sporting venue to become a shrine to a bygone era, when communities were cemented together by the ritual of demolishing a 10-pin setup. Thankfully, Bonwood is a freeze frame of bowling culture, when leagues were king and when a night of bowling was cheaper than a night at the movies. Thank you, Bonwood, for keeping bowling to the fundamentals: Friends, beer, 10 pins and a ball. 2500 S. Main, Salt Lake City, 801-487-7758, BonwoodBowl.com
2. Fat Cats
3. Ritz Classic Lanes

Best Hidden Bar On High
The Tram Club
Ensconced in the depths of Snowbird’s Lift Lodge, the Tram Club offers guests an intimate, rustic getaway—a place to imbibe, relax or let loose throughout the year. In warmer months, the club’s patio opens up onto a pristine mountain setting that, during festival season, swells with the sounds of roots, blues and gospel music. Inside, pool tables, video games and wide-screen TVs provide much of the entertainment, along with live bands and dancing. Often, regulars have the place to themselves. Considering the cool retro-chalet atmosphere and staff of friendly ski fanatics, it’s no wonder regulars prefer to keep this place on the down low. Shhh. Snowbird Resort, Highway 210, Little Cottonwood Canyon, Snowbird, 801-933-2222, Snowbird.com

Best Cocktails
The Red Door
A bar that has not just four specialty martini options, but four specialty martini menus, is sure to leave an impression on patrons, especially with choices like “Kama Sutra,” “Mescalini,” “Antifreeze” or “Cocaine Lady” martinis. But The Red Door stages that drinking adventure inside one of Salt Lake City’s most urbane yet relaxed brick-walled hang-out joints in town. It’s one of just a few locales that is out of place in Salt Lake City, not because it aspires to be cosmopolitan but because it succeeds. 57 W. 200 South, Salt Lake City, 801-363-6030, BehindTheRedDoor.com
2. Gracie’s
3. Keys on Main

Best Gay Bar Legacy
Radio City
Ordering a 1-liter bottle of Miller High Life amidst the faded glory that was Radio City, fabled as the oldest gay bar west of the Mississippi River, was a peculiar delight. Once a hot spot for jazz musicians coming through town on the railroad, Radio City (147 S. State) was a link to generations of queer Utahns past. In the 1950s, the transvestites were stealth, the men were dapper, and you didn’t go to Radio City without proper attire. By late 2009, when the place closed for good—and its building razed—the glory had been replaced by a grittier vibe. Nevertheless, a beer at Radio City’s bar was an encounter with gay history that will be missed.

Best Cheap Drinks
Cheers to You
Whatever your drinking preference for the evening—be it a rosy glow, a nice buzz or the drunk tank—Cheers has the all-around budget-friendly beverages and nightly drink specials to accommodate your tastes. Try $2.50 domestic and $3.50 microbrew mugs on Mondays and Tuesdays, or why not ring in hump day with an after-work cocktail (or five) on $2 cocktail Wednesdays. And on Thursday, bring the whole posse out for unbeatable $4.50 and $5.50 pitchers. No matter the day or night, Cheers to You understands that cheap drinks can help provide a rich and rewarding neighborhood bar experience. 315 S. Main, Salt Lake City, 801-575-6400, CheersToYouSLC.com
2. The Bongo
3. A Bar Named Sue

Best Amateur Pole-Dancing
Habits
Have an aversion to pasties and dangerously high heels? You don’t have to be a “professional” to work any of the three poles at Habits on Tuesdays, when the swank mid-valley club offers free lessons from experienced aerialists—after a few $3 martinis, maybe you’ll even pull in some tips. Dudes are welcome—encouraged, even—to try their hand and other extremities on the pole … Seriously, there’s nothing more fun to watch than that. 832 E. 3900 South, Salt Lake City, 801-268-2228

Best Downtown Expansion
The Huka Bar & Grill
The ever-sexy Huka Bar & Grill does more business in Murray than most nightclubs do downtown, so it was only a matter of time before the Huka opened a second location closer to the Temple’s zip code to better serve smokin’ (in every sense) urbanites. The new Huka, located underneath The Bay, isn’t quite as spacious as the original—a cozier vibe but with no fewer TV screens, sexy wait staff or, of course, hookahs. What is bigger: The daily menu, geared toward downtown business folk with brunch, lunch and dinner. 404 S. West Temple, Salt Lake City; 151 E. 6100 South, Murray, 800-281-4852, MySpace.com/TheHukaBar

Best Historic Strip Club
The Lighthouse Lounge
Small, dive-y (in a good way) and located on Ogden’s 24th Street for more than 50 years, the Lighthouse Lounge is a zero-frills strip club that’s great for a draft and a dance (it’s a beer-only tavern with a single stage, one girl at a time). Too bad Ogden has built up around it to the point where the Lighthouse is now in the wrong “zone” to remain a sexually oriented business (again, it’s been there for more than 50 years). In October 2009, the Ogden City Council told the Lighthouse’s owner to either become a stripper-free bar or move to some far-flung industrial section of the city. A travesty—that ain’t the Ogden we know. 315 24th Street, Ogden, 801-392-3901

Best Dance Club
W Lounge
Some clubs have passionate dance devotees as regulars, but they also have an over-abundance of floor space, thinning what should be a dancing horde. Other dance club nights are fun at first, but get trendy and overcrowded too quickly. Then there are champions like W Lounge, whose loyal following, diverse DJs, tight dance floor and competitive drink specials have assured the proper club balance. Even when it’s packed, you never seem to have to wait too long to get a drink at W. It’s a mystery how they maintain that rhythm, but it’s made them a magnet for people serious about dancing and dance music. 358 S. West Temple, Salt Lake City, 801-359-0637, MySpace.com/WLounge
2. Area 51
3. The Hotel/Elevate

Best State Street Comeback (Again)
Bar Deluxe
When Bar Deluxe shut down in May 2009, it looked like SLC had lost another excellent live-music venue forever (or, what would seem like forever in bar time). But, just as when the club arose from the ashes of Egos years ago, the Bar Deluxe was back in business and rockin’ State once again by October. The club features more DJ nights than before (including “Catch a Vibe” reggae Mondays), but the Slippery Kittens Burlesque and local and touring bands still rule the stage (Chali 2Na was the Saint Patrick’s show to beat this season, in case you missed it). Good to have the Bar-D back. 666 S. State, Salt Lake City, 801-532-2914, MySpace.com/BarDeluxeShow

Best Gay Club
The Jam
After opening in late 2008 with a license to sell just beer, Jam hoped and expected to get their liquor license swiftly. It wasn’t until January 2010, 16 months later, that Jam was allowed to serve its first glass of Cabernet and shot of tequila. It’s not surprising they survived that liquor drought. The remodeled road house is among the most beautiful bars in town, the staff and owners are charming, and it’s the anchor of a revitalized neighborhood, Marmalade. Already an institution, Jam was also the readers’ pick for best gay bar in 2009—and that was in the beer-only days. 751 N. 300 West, Salt Lake City, 801-891-1162, JamSLC.com
2. The Trapp
3. The Paper Moon

Best Legal Mafia
Steel City Mafia at Club 90
Come football season, many clubs don additional colors besides the favored University of Utah red when fans gather to cheer on their favorite hometown teams. You can see groups of various organizational skill and membership levels supporting Notre Dame, the Detroit Red Wings, Chicago Cubs, USC and so on. Perhaps the best and the noisiest, though, is the Steel City Mafia that meets at Club 90 whenever the Steelers are playing. Decked in their traditional black and yellow, and armed with fans who make a grand day of it from the parking lot onward and back again, the SCM lets loose with the gritty good times associated with Pittsburgh. It doesn’t hurt that Club 90 serves up the same good times as they have for 30 years on football Sunday—lots of screens, lots of noise and lots and lots of food. 9065 S. 150 West, Sandy, 801-566-3254, Club90SLC.com

Best New Metal Joint
Abyss Rock & Roll Sports Bar
It doesn’t look like much from the outside, but inside, North Temple’s Abyss is virtually unrecognizable from its Old Bottling House days: The black, chrome and nautical interior resembles a slick Sunset Strip rock club crossed with the Krusty Krab from SpongeBob SquarePants. The emphasis is on the rock, though. The Abyss’ slammin’ sound system and weekly rosters of newbie and veteran local metal acts (like 30-year party animals The Pedestrians), as well as the occasional touring marquee band, make it the headbanger hideout to beat. And the food ain’t bad, either. 1390 W. North Temple, Salt Lake City, 801-521-8500, AbyssRocks.com

Best Dive Bar
Burt’s Tiki Lounge
A Salt Lake City institution for decades now, Burt’s remains our readers’ favorite dive bar even though the place has expanded its size and instituted (gasp!) cover charges a few years back. Burt’s is common ground for rockabilly cats and queens, stoner-rock fanatics, punks, metalheads and people who just want a cheap drink paired with ribald conversation and walls worth exploring for their mix of kitschy art, band flyers and, um, colorful graffiti. Tip back one of the gnarly house specialty shots, the Cerebral Assassin, and you’ll feel right at home in no time. 726 S. State, Salt Lake City, 801-521-0572, MySpace.com/BurtsTikiLounge
2. Cheers to You
3. The Bongo

Best Cozy Bar
Poplar Street Pub
Coffeehouse charm—plush couches, lamps, end tables—but with adult beverages, Poplar Street Pub is the perfect, amicable bar. It’s better than your living room for its capacity, drink selection and hip scene, and just as cozy. Beyond the front room sits another bar, a pool table and a large patio for seasonal swilling. Even the off-street front facade has an air of tucked-away ease-fullness. And, nothing’s more comfortable than affordable beer, so check out $3.50 micro steins on Mondays. 242 S. 200 West, Salt Lake City, 801-532-2715, PoplarStreetPub.com