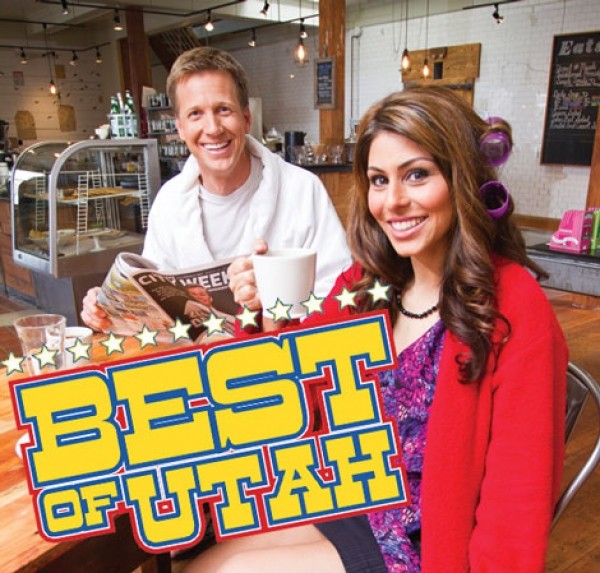 Best Early-Early-Bird Anchor Team
Dan Evans & Shauna Khorrami, Fox 13
Before Kerri Cronk glides in and joins the weekday newscast at 6 a.m., Fox 13’s Good Day Utah is a slightly different show: Between 5 and 6, Dan Evans’ co-anchor is reporter Shauna Khorrami, a recent addition to the station who really grabbed the attention of Best of Utah voters this year (but not as many as you, Dan—relax). It’s a tough timeslot, but Evans (who is not related to newsman “Dan Evans” of Big Daddy’s Pizza commercial infamy) and Khorrami (a former CNN and KTLA-Los Angeles producer) have such an effortless rapport, we’d almost like her to stick around longer—if it didn’t mean pushing Cronk out of her chair, that is. Wake up earlier (or go to bed later) and see. (Pictured at The Rose Establishment, Best New Downtown Coffee Shop)
Weekdays, 5-6 a.m., Fox 13, Fox13Now.com 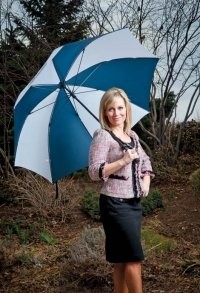 In another long-brewing upset, diminutive morning/noon KUTV 2 weather reporter Debbie Worthen has taken down Fox 13’s Damon Yauney after years at No. 2. Do viewers trust her more because she appears actual size on TV? OK, just one more short joke: What’s the weather like down there, Debbie? The native Utahn has been with KUTV for nearly 10 years now, starting as a traffic and news reporter before moving to the weather department in 2006. “It always feels pretty good to get singled out,” Worthen says. “But, the morning show is such a group effort that I feel like this really goes to Ron, Casey, Mary and me!”
Connect2Utah.com
2. Damon Yauney, Fox 13
3. Brett Benson, Fox 13

Best TV Anchorman
Mark Koelbel, KUTV 2
He’s kind of a big deal; he has many leather-bound books, and his house smells of rich mahogany. Excuse the vintage Anchorman reference, but since KUTV 2’s Mark Koelbel has been winning or placing in this category since the year that flick ruled the box office, why not? And now that KUTV rules Utah’s ratings, it’s going to be even tougher to unseat everyone’s favorite lead anchor. Step up your games, local newsmen.
Connect2Utah.com2. Ron Bird, KUTV 23. Dan Evans, Fox 13

Best TV Anchorwoman
Hope Woodside, Fox 13
OK, we get it—you really, really, really like Hope Woodside. So do we: Best of Utah 2011 marks Woodside’s 14th consecutive win, and we know she’ll be just as excited about this one as she was the first back in 1997. Jaded is just not her. The Fox 13 News mainstay is the fair face of local news, and City Weekly applauds your good taste in voting for her once again—clear another award space on your desk, Hope.
Fox13Now.com2. Mary Nickels, KUTV 2
3. Karen Carlson, ABC 4


Best Tough Reporter
Kelli O’Hara, ABC 4
For better or worse, most local TV reporters tend to come off as soft and interchangeable, like there’s a consultant in their earpiece telling them to tone it down and play nice—you don’t often see a “tough” reporter whose presence commands your attention and elevates a story above background noise. Investigative reporter Kelli O’Hara, an East Coast transplant who can be seen all over ABC 4’s news schedule, has the kind of no-fluff grit and gravitas that make even the occasional nonstory, like buying spice in a low-rent convenience store, pop. Other local reporters (female and male alike) could take a lesson from her in making the viewer pay attention and believe it.
ABC4.com, Twitter.com/KelliOHaraABC4

Best TV News Reporter
Chris Vanocur, ABC 4
How does he do it? The better question might be, “What else would he do?” ABC 4’s Chris Vanocur belongs standing in front of a camera, mic in hand, pointing dramatically and spelling out the latest with his funky speech cadence that’s equal parts Tom Brokaw and Christopher Walken. You’ll never see this guy kicking back behind the anchor desk with a teleprompter—at least we hope not, because that would just be weird. Vanocur is the man on the street, at the Capitol, in your face and everywhere else.
ABC4.com2. Ben Winslow, Fox 133. Nineveh Dinha, Fox 13

Good, humorous promos from local TV news are too few and far between—which is why Fox 13’s recent spot for evening weatherman Brett Benson was so noticeable. The ad begins as a sincere portrait of Benson’s lifelong sports obsession, as well as his years playing BYU football, segueing into his decision to hang up the cleats and pursue meteorology. Then comes the surprise sucker punch from former coach LaVell Edwards: “Yeah, he was never really a very good football player.” Hey, the gridiron’s loss is our gain. (Pictured at Iggy’s Sports Grill this year’s Best Sports Bar)
Weeknights, 5 and 9 p.m., Fox 13, Fox13Now.com


Best Late-Night Talk Radio
S.P. Romney, K-Talk 630
South Jordan-based KTKK AM 630 is the third-oldest talk-radio station in the USA, as well as being in the uppermost percentile for round-the-clock psycho-conservative chatter. K-Talk has never heard a conspiracy theory or right-wing cause it couldn’t fully embrace and re-spew. Which makes long-time local talker S.P. Romney’s late show all the more of an anomaly: He’s the only local radio host monologue-ing and taking calls between 10 p.m. and midnight, and he doesn’t sound like he’s holed up in a bunker with a rifle and a Bible waiting for the End of Days. Romney (yes, he’s related to that Romney) is no Air America bleeding heart, either—he’s just a regular Joe who’s a little smarter than your neighbor, and you’ll never have to go through a call screener to get to him.
Weeknights, 10 p.m.-midnight, K-Talk 630 AM, K-Talk.com