Pago
Winning the Best Wine Selection award is about more than just the number of bottles in the cellar. It’s also about how well the wines suit the cuisine, how the wines are stored and served and whether the pricing is customer-friendly. Well, Pago nails all those criteria, starting with wines by the glass served at proper temperatures thanks to its Cruvinet wine system, which keeps temps constant and open bottles fresh for up to six weeks. And the eclectic list ranges from sparkling cavas from Spain and South African Chenin Blanc to Argentine Malbec and Cabernet from Australia. Best of all, servers at Pago are well-schooled in pairing wine with food, so you’re sure to get a spot-on wine/food partnership every time.
878 S. 900 East, Salt Lake City, 801-532-0777, PagoSLC.com
2. Wild Grape New West Bistro
3. Fratelli Ristorante

Best Place for a Private Party
Sapa Bar & Asian Grill
When you walk inside Sapa, prepare to be blown away by the lengths Mai Nguyen and Sean Dang went to in creating the lush interior and inviting courtyard, for which they imported and assembled authentic 300-year-old Vietnamese houses. Enjoying sumptuous appetizers like firecracker calamari, lamb croquettes and jalapeño bombs, paired with hot and cold sakes, wines and Asian beers will literally transport any wedding reception, a birthday or a company gathering into another space and time. Yet, upon leaving, you’ll return from your cosmic journey to Asia and find yourself once again on State Street, able to drop in at Bar Deluxe for a nightcap.
722 S. State, Salt Lake City, 801-363-7272, SapaBarAndGrill.com

Best Tres Leches
Anayas Market
Tres Leches is a sponge cake drenched in three types of cream: sweetened condensed milk, evaporated milk and heavy cream (which is also whipped into a topping). With all this cream and syrup, Tres Leches cake becomes sweet, dense, moist and basically to die for. But if you don’t make it yourself, you’re taking a chance that a bakery cake could be soggy and mushy. Luckily, the folks at Anayas Market have figured it out. Plus, on the whipped topping, they’ve artistically arranged a swirl of candied fruits and drizzled chocolate on the sides. What’s the Spanish word for decadent? “Yum,” we think.
Multiple locations, AnayasMarket.com


Best New Sushi
Ichiban Sushi & Asian Grille
This relatively new restaurant is already so popular, you may have to wait more than 15 minutes to receive your first order of sushi, but it’s worth the wait. The fish is so fresh, it still has those subtle taste nuances loved by sushi aficionados. Try innovative rolls like the executive or volcano. But the best part is the price—rolls and hand rolls are all half-off the menu price. When large rolls are only $2.50, anyone can afford to eat sushi. Don’t like fish? Sit at one of the tables and order classic Chinese dishes like beef with broccoli, also excellently and authentically prepared.
3424 S. State, Salt Lake City, 801-486-8882, IchibanSushiUT.com

Best Sips
Kiler Grove Winery Tasting Room
When you think of boutique wineries, a warehouse in South Salt Lake may not be what comes to mind. But Utahns have just such an urban winery to call their own now. Michael Knight is busy transforming his grapes—which come from 10 acres near Paso Robles, Calif.,—into RhÃ´ne-style wines. Knight co-owns the winery with his wife, Elva, and his brother-in-law, David Olsen, all of whom hail from California’s Sonoma and Napa Valley wine-growing region. They opened Utah’s first urban winery and tasting room in January 2011, allowing those 21 and up the chance to freely sample wines. It’s also a venue for receptions and classes on winemaking.
53 W. Truman Ave., South Salt Lake, 801-746-0977, KilerGroveWines.com

Best Creature Comfort Combo
Fiddler’s Elbow
For creature comforts, few have the formula down as well as Fiddler’s Elbow. If your inner creature has the munchies, order up some Buffalo wings, deep-fried calamari, pulled-pork nachos, flavored smashed potatoes or spicy hummus. If that chow-down creates a thirst, there are more than 30 beers on taps to choose from. Wolf this down while comfortably ensconced in a big couch in front of a giant TV screen, watching your favorite team. Your creature will be content.
1061 E. 2100 South, Salt Lake City, 801-463-9393, FiddlersElbowSLC.com

Best Retro Ogden Meal
Pop’s Burgers, Malts & More
Ogden has always had a bit of a retro flair, and Pop’s is the place to take a true culinary trip down memory lane. Pop’s expanded to new digs in 2011, complete with sparkling red booths with chrome accents, a jukebox and a pinball machine that owner Jim Powell rigged to be playable without coins. And Powell has given just as much attention to the food: Expect diner classics like burgers, fries and hot dogs prepared from scratch and brought to your table along with soda in a real glass. Farr’s Ice Cream is also served—try it in an impossibly huge cone or in a banana split.
310 E. 12th St., Ogden, 801-737-9067, PopsMaltShop.com


Best Local Fresh
Caffe Niche
There is a growing demand from diners for locally grown, environmentally friendly food options. And local and fresh are the key tenets at Caffe Niche. To prove it, daily deliveries include sustainably sourced fish and locally grown produce from Utah, Idaho, and Wyoming, offering a variety of tasty options every day. A simple power lunch can include a cup of locally roasted Caffe Ibis coffee, a small plate of heirloom tomatoes topped with a seasonal balsamic reduction and followed by an order of fresh fish tacos—a blackened fillet of the day’s fish, topped with cabbage, pico de gallo and a cilantro lime aioli, all wrapped in local corn tortillas.
779 E. 300 South, Salt Lake City, 801-433-3380, CaffeNiche.com


Best Peruvian
El Rocoto Peruvian Restaurant
Rookie epicurean mistake: thinking Peruvian cuisine is similar to Mexican. The chefs of Peru infuse influences of Spain, China, Italy, West Africa and Japan into their dishes—basically all the continents where their immigrants came from. El Rocoto owner/chef Macario Diaz has created not only a taste of home for Peruvians craving seafood and chicken dishes, but also a community center that often features live music and karaoke. Expand your palate with Peruvian paella, pasta dishes like tallarin saltado, grilled chicken such as pollo a la braza, the stir-fried beef and potato wedge dish called lomo saltado, the cheese-covered potatoes of papa a la huancaina, and seafood dishes like jalea de mariscos and ceviche. But just don’t call it Mexican food, because it isn’t.
3904 W. 3500 South, Suite B, West Valley City, 801-963-2657, ElRocotoUtah.com

Best Meat & Cheese
Matt Caputo & Troy Peterson
Matt and Troy are but two of the reasons that Tony Caputo’s Market & Deli is regarded as among the premier small businesses in all of America. Serious meatophiles or cheeseheads who stop at either market (the original downtown location where Matt plies, or in the 15th & 15th neighborhood, where Troy does), are always treated not only to the highest grades of domestic and imported meats and cheeses, but also to a level of product knowledge and expertise not usually available to most Utah shoppers. The best Parma hams, salami and sausages in Utah? Check. The best cheeses from every corner of the globe, including from the finest of Utah’s artisan cheesemakers? Double check. Matt and Troy (with tutelage from Papa Tony) have been a great team for years, putting Utah in the big leagues when it comes to meat and cheese expertise. Call regarding their next cheese tasting event.
314 W. Broadway, Salt Lake City, 801-531-8669, 1516 S. 1500 East, Salt Lake City, 801-486-6615, CaputosDeli.com


Best Goulash
Atlantic Cafe
For over 10 years now, this smallish, bistro-style cafe has been serving some of the best and most consistent food in all of downtown Salt Lake City. Most of the management, kitchen and waitstaff have always been persons born in the lands that once comprised the former nation of Yugoslavia—Serbia, Croatia and Bosnia. Among the many menu items not found on Utah menus before their arrivals are such taste gems as sarma (cabbage rolls) or cevap (spicy sausages), but one item that is always a hit is usually associated with Hungary, not the Balkans—goulash. If you find yourself walking down Main Street and the daily special at the Atlantic that day is goulash, stop. Don’t take another step; stop and partake. One taste of this seemingly simple stew and you’ll know you’ve left Utah for a better place.
325 S. Main, Salt Lake City, 801-524-9900, AtlanticCafeMarketSLC.com


Best Nacho Magic
Gracie’s
You didn’t think there was much new to do with nachos, did you? Some chips, cheese, vegetables, sour cream, whatever. Well, Gracie’s nachos include all of that, plus some kind of magic that make these nachos hopelessly addictive. Maybe it’s the cheese, which is so liquidy we’d think it was Velveeta if it weren’t so good. Maybe it’s the freshness of the vegetables. Maybe it’s that you can’t go wrong in your choice of protein—Italian sausage, angus beef, grilled chicken or beans. Maybe it’s—well, never mind. Just go order a plate.
326 S. West Temple, Salt Lake City, 801-819-7565, GraciesSLC.com


Best Step Up in Asian Dining
J. Wong’s Asian Bistro
How many local eateries attribute their design to a feng shui specialist? It’s obvious the “energy” is good at this Chinese-Thai restaurant located in the historic Patrick Dry Goods Building near The Gateway. It appeals to all of the senses. Visually, bamboo lamps and high-back booths define the eating area. Your hands can’t help but appreciate the lacquered tabletops. Gentle Buddha bar music soothes your ears. And a full menu of Chinese, Thai and Asian specialties (including Peking Duck) tempts the nose, then arrests the taste buds. Its hip, elegant vibe and local ownership make J. Wong’s a great place to eat solo or meet up with others for any special occasion.
163 W. 200 South, Salt Lake City, 801-350-0888, JWongUtah.com 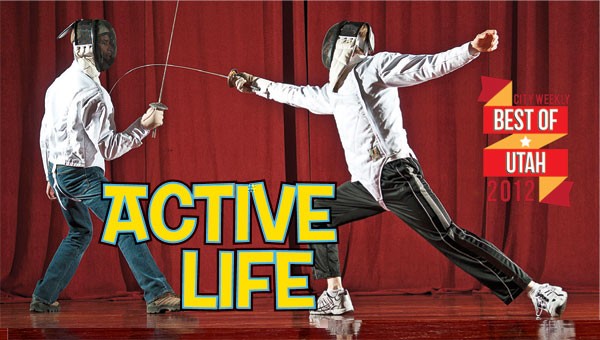