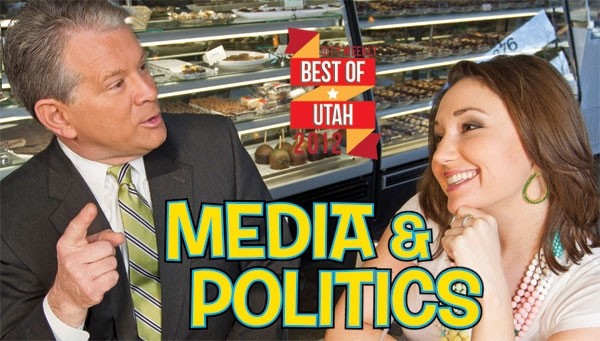 
Most news reporters do anything they can to avoid being part of the story, but this KUTV 2 morning anchor couldn’t avoid doing so when a mammogram she got to show viewers how easy the procedure was ended up showing some malignant cancer cells. Nickles (center) kept right on working after a lumpectomy and through chemo and radiation treatment, and kept Channel 2 viewers appraised of her ordeal via a blog, MarysCancerStory.blogspot.com.
KUTV 2, weekdays, 5-8 a.m. & noon, Connect2Utah.com 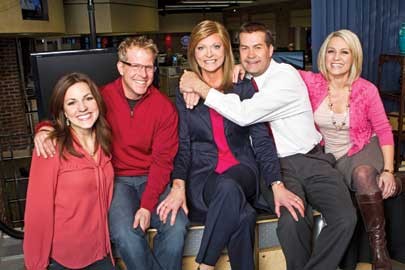 Mark Koelbel, KUTV 2
Years before KUTV 2’s ratings resurgence, evening anchor Mark Koelbel was handily winning this category—so, in a small way, City Weekly can take some credit for helping 2 finally become No. 1. You’re welcome; give us a wave across Main Street. Why do our voters keep coming back to Koelbel, even when shiny new suit-and-tie challengers are popping up all the time at competing stations? One newscast will make anyone a believer: He’s got the look, the skills and the rhythm (as we’ve mentioned before, Koelbel is a damned fine drummer) that most news-desk jockeys can only hope to emulate, much less match.
KUTV 2, weeknights, 5 p.m. & 10 p.m. Connect2Utah.com
2. Dan Evans, Fox 13
3. Ron Bird, KUTV 2

Hope Woodside, Fox 13
Guess what? This makes 15 wins in a row for Fox 13’s Hope Woodside—any contenders for the Best TV Anchorwoman tiara (actually, it’s a plaque, but we may have to make a crown for this landmark occasion) had better get comfortable; you’ll have to pry this from her cold, immaculately manicured fingers. “Winning this for 15 years feels awesome—especially when the competition is so tough,” Woodside humbly says. “Winning would give anyone a big head, but there’s always Facebook. Just before I got the news of this award, I was reading a comment from a guy who informed me my roots were showing! It keeps you humble.”
Fox 13, 5 p.m. & 9 p.m., Fox13Now.com, Twitter: @HopeWoodside
2. Mary Nickles, KUTV 2
3. Shauna Lake, KUTV 2

Chris Vanocur, ABC 4
First, a plea to ABC 4: Give Chris Vanocur’s weekend talk show, On the Record, a better timeslot—8:30 Sunday mornings just doesn’t work for us. How about 11 p.m. Sunday, after Sports Zone? Or on sister station CW30 as a lead-in to Saturday Night Live? Set him up with a comedy monologue and a band—could be good. In more reasonable hours on ABC 4, Vanocur the reporter is your No. 1 source for local political news and, more pressing, liquor-law wackiness—seriously, he’s like the John Stossel of booze news, minus the mustache. Perhaps you other reporters should get your priorities in order.
ABC4.com, Twitter: @CVan4
2. Ben Winslow, Fox 13
3. Chris Jones, KUTV 2

KUTV 2
Proving its 2011 rise to dominance wasn’t a fluke (or the result of truckloads of freebie giveaways), KUTV 2 finished strong again this year—both in local ratings and, more importantly, our readers’ Best of Utah voting. Being affiliated with network powerhouse CBS doesn’t hurt, but KUTV’s uniformly solid newscasts and slick presence across mornings, afternoons, evenings and weekends, not to mention a relatively low turnover rate that keeps familiar faces on the screen, can’t be discounted. We’re still not sure what that afternoon “All-Lady Newscast” promotion was about, but who are we to argue with a media outlet that grabs these kinds of numbers?
Connect2Utah.com
2. Fox 13
3. KSL 5

Debbie Worthen, KUTV 2
When you’ve got a talented employee, it’s smart to get as much out of him or her as possible. In Worthen’s latest decade-long stint at KUTV 2—following a brief traffic-reporter gig in the late ’90s—she has been an appealing meteorologist for 2 News This Morning. But she has also lent her energy and enthusiasm to remote spots out in the snow, in-studio shenanigans and hosting the daily Fresh Living program. That’s one versatile weather-guesser.
Connect2Utah.com, Twitter: @DebbieWorthen
2. Brett Benson, Fox 13
3. Damon Yauney, Fox 13


Best Pairing of TV Reporters
Scott McKane & Cristina Flores
Fox 13 reporter Scott McKane and KUTV 2 weekend anchor/reporter Cristina Flores may spend their workdays chasing down stories for different TV stations, but when they get home, the story they’re focused on is what’s going on with their three kids—the reporters have been married nearly 15 years. The secret to their success? McKane says it’s a work in progress: “We make it up as we go along.” Flores says it’s a juggling act. “We work opposite shifts and, until very recently, had no common days off. Otherwise, our children would spend most of their lives in daycare. We hope someday they will appreciate what we do for them and find us a nice nursing home.”
Scott McKane, Fox13Now.com; Cristina Flores, KUTV 2, 6 & 10 p.m.

Nineveh Dinha, Fox 13
Sure, it’s a silly category—they can’t all be as deadly serious as Best Salad. Fox 13’s Nineveh Dinha literally owns this Best of Utah title, having won it all four years of its existence, but the reporter/weekend anchor doesn’t know the toll it takes on her co-workers. “It happens all the time,” says fellow reporter Ben Winslow. “I’ll go out on a story, and people will come up to the Fox 13 news truck and ask, ‘Where’s Nineveh?’ Or I’ll show up for an interview and get a look of disappointment because ‘they didn’t send Nineveh—she’s so beautiful.’ I’ve learned to roll with it. After all, I sit next to her at work: Besides being radioactively hot, she’s incredibly smart and a damned good reporter.”
Fox 13, weekends, 5 & 9 p.m., Fox13Now.com, Twitter: @NinevehDinha
2. Kim Fischer, ABC 4
3. Kerri Cronk, Fox 13