John Dehlin, the founder of the Open Stories Foundation, knows exactly how hard it is for questioning members of the LDS Church to find a place to ask questions and find unbiased answers about their faith. With church apologists and anti-Mormons spouting blind faith or blind disbelief, Dehlin realized there needed to be a safe, scholarly and civil forum to discuss the more taboo elements of the religion. His Mormon Stories podcast has been downloaded tens of thousands of times by listeners curious about the legacy of polygamy, the church’s pre-1978 ban on giving the priesthood to black members, and other misunderstood topics. The podcast balances controversial discussions with faith-promoting talks and profiles of famous Mormons, walking the fine line of respecting Mormonism’s traditions and culture while also seriously examining it.
MormonStories.org

Liberal outrage in the city of salt is not uncommon, but it’s nice to see a blog that knows how to hone its outrage into katana-sharp slices of wit against the dominant conservative culture. Whether taking on Mitt Romney—“Given the astonishing political inexpedience of writing off half the country as lazy moochers, I almost feel sorry for Mitt. A man can only take so much junk-punching”—or saying local conservative think-tank leader Paul Mero’s tortured logic is the “intellectual equivalent of watching a drunken clown hopped up on methamphetamine juggle live snakes,” this blog knows how to season the local cultural landscape with a much-needed dash of acerbic wit and analysis.
SaltCitySinner.blogspot.com


Best New Podcast
I Am Salt Lake
Reclaiming the long-lost role of the solo broadcast interviewer, Chris Holifield took it upon himself in 2012 to buy a bunch of podcast equipment and start interviewing people from the Salt Lake City scene. His podcast covers local businesses, art, music, film and anyone or anything he finds intriguing. Holifield asks questions that explore the person and what drives them to make Salt Lake City a better, more vibrant place. His podcast has struck a chord with listeners, who download the twice-weekly podcast to catch Holifield’s unique slant on Salt Lake City.
IAmSaltLake.com

Best Historical Music Tome
ProvoShows.com
With a music scene growing so big it’s starting to look like a Jiffy-Pop bag ready to burst, Provo has come into its own as the place to find the freshest Utah indie music. With so many bands and showcases coming and going, you’ll never know when the next new band will pop out of Utah County. Thankfully, Chris Coy founded ProvoShows.com, a website dedicated to archiving posters, photos, tickets and all sorts of memorabilia from the 100 Block and beyond to show how powerful the down-south music scene has become.
ProvoShows.com

Best Local Blog
Gavin's Underground, CityWeekly.net
Whenever Gavin Sheehan drops a new post on Gavin’s Underground at CityWeekly.net, we never know what it’s going to be about. Really, we have no damned idea what’s coming. It could be about a local band, a jewelry maker, a podcast, a print shop, a brewery, a stand-up comic, a theater production, an author, a clothing shop—hell, he even found something cool in Cedar City, heretofore thought impossible. Sheehan’s relentless dedication to spotlighting everything in all of the local scenes and miles-long Q&A transcriptions are unique not only to this market, but to most others as well. You—and we—are lucky to have him.
CityWeekly.net/Underground
2. Big Shiny Robot
3. Indie Ogden

Best Commitment to the Cause
Diana Lee Hirschi
At 74, Hirschi remains one of Salt Lake City’s most treasured activists. Battling the political complacency that has long gripped much of Utah, she refuses to back down from ideals even in these days of partisan rhetoric and political packaging. She runs a monthly honk & wave—a social street-corner protest movement—a reminder of the power of commitment.

Best Friend to Addicts
Pat Fleming
There’s a touch of the mad professor about Pat Fleming as he rushes from one meeting to the next. But all that rushing is because there’s so much at stake in getting help to folks in the throes of addiction. The head of Salt Lake County’s behavioral-health division, Fleming oversees substance-abuse programs and county funding. He cares with such a passion that you get the feeling that, if he could, he would just reach down and scoop up those struggling with addiction from the streets and administer to each and every one of them himself.
SLCO.org 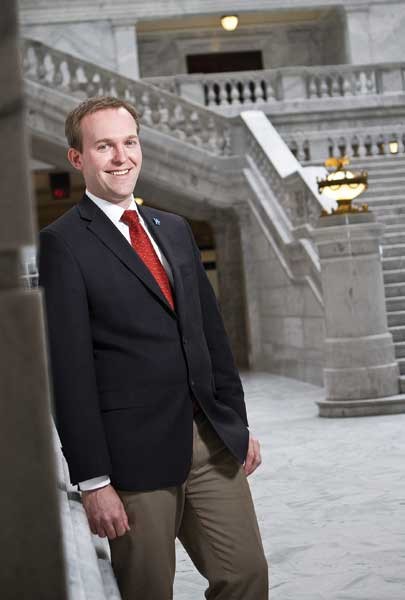 Best Politician
Ben McAdams
Even Utah’s 2012 “Romney Tsunami” couldn’t wash away Democrat Ben McAdams, the victor in the tight Salt Lake County mayoral race. Given McAdams’ chops for getting things done, it’s not surprising that he was able to hang on. He spent years passing more bills at the Legislature than most Republican lawmakers while not shying away from important progressive battles, like education funding and discrimination protections for LGBT Utahns. With all that, plus his squeaky-clean campaign for county mayor and years of local government experience while working for Salt Lake City Mayor Ralph Becker, it’s no wonder he came out on top.
Mayor.SLCo.org, Twitter: @BenMcAdams
2. U.S. Rep. Jim Matheson
3. Salt Lake City Mayor Ralph Becker