Best Radio Station
X96
Listeners can complain about Mumford & Sons all they wish, but the truth is that X96 is one of the few alternative destinations remaining on Utah’s dial now that oldies, classic-rock and community-radio stations alike have started playing the Rolling Stones and Led Zeppelin like they’re going out of style. X96’s mix of classic ’80s and ’90s alternative hits, blended with newer indie rock, has kept the station firmly secured in the hearts (and dashboard radios) of fans across northern Utah. And they get bonus points for still having a mostly local lineup of talent doing live broadcasts and keeping in touch with listeners.
96.3 FM, X96.com
2. KBER 101.1
3. 97.1 ZHT

Best Rivalry That Went Poof
University of Utah vs. BYU football
For the first time since World War II, the Utah vs. BYU football game will not be played this year. The reason for this unconscionable void in the college football schedule is so Utah can fit the likes of Idaho State, Fresno State and Michigan into its non-conference slots. Sure, Utah’s inclusion in the Pac-12 has been nice. It’s fun to watch good teams play. But at what cost? Dating back to 1896, the Holy War—with all of its alleged beer-pouring, interfamily hatred and strange comments during sacrament meeting—has been a rivalry that ranks with the storied traditions of other conferences. Idaho State, Michigan, USC, Stanford, whomever; they’re just a bunch of teams that play football. BYU, though—those blasted Cougars—are much, much more. Resume spilling beer on church-going relatives: 2016. Resume laughing in the face of beer-drinking relatives: 2016.
UtahUtes.com, BYUCougars.com

Best Group of Cat Lovers
Utah Cat Fanciers
Sure, you love your cat, but is your cat the best? The Utah Cat Fanciers is one of the biggest chapters for international cat lovers and professional cat competitors (catters?). In addition to monthly meetings, the Utah Cat Fanciers hosts a yearly cat show that attracts hundreds of cats from all over the globe. And the group isn’t just for purebreds—the Fanciers encourage and feature many competitions for rescue cats as well.
UtahCatFanciers.CFaNorthWest.org

Best New LGBT Event
Provo Pride
The home of BYU, Provo is the epicenter of Utah’s conservative culture, so you might assume that the city’s first Pride event would have caused shock and consternation in the city. But the September 2013 event was largely supported and attended by members of the community who see change coming and welcome it with open arms. And the planning for the 2014 event is already underway. ProvoPride.org

Best Social Scientist
Andrew Hales, LAHWF
In the past year, local filmmaker, comedian and YouTube personality Andrew Hales has successfully posed as Macklemore and snapped photos with fans at the Maverik Center, flown to London to awkwardly kiss the hands of various Brits, and purposely botched Christmas carols with people waiting for Trax. Many of his YouTube videos have well over a million views, but we’re mostly impressed that there are people down in Utah County who have a sense of humor.
LAHWF.com

Best TV News Reporter
Chris Jones, KUTV 2
Every TV newscaster has a certain style when delivering the news. But none of the Utah pool of talent takes quite the same approach that Chris Jones—who typically covers the crime beat, along with general and investigative pieces—does to delivering his tidings of news, suffering and drama. It’s almost as if he’s the lead singer of a rock band: Every time the camera cuts back to him after his typically staccato yet soft-spoken account of a story, he stands, head hung down, intense eyes covered by a few locks of hair, all but set to toss his head back and launch into song. That mix of good looks, timing and investigative skills is no doubt why our readers love him.
KUTV 2, 10 p.m. weeknights, KUTV.com, Twitter: @JonesNews
2. Ben Winslow, Fox 13
3. Nineveh Dinha, Fox 13 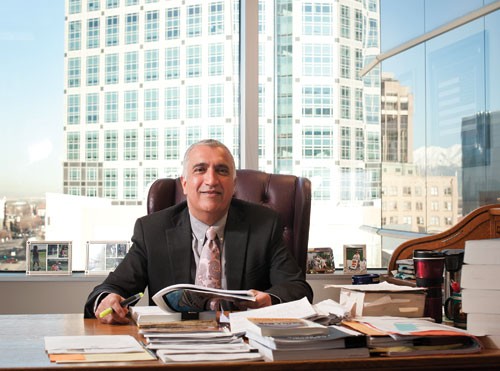 Best Utahn
Salt Lake County District Attorney Sim Gill
Salt Lake County’s District Attorney Sim Gill has had, by any account, an extraordinary first term. He waded into the political quagmire of Danielle Willard’s killing by undercover cops and effectively dragged the press-hating West Valley City Police Department into the light, raising questions about the agency’s narcotics unit and tossing out more than 100 cases. While many are still waiting to see what justice Willard’s family receives, Gill’s star has risen even higher as a result of his joint investigation with Davis County District Attorney Troy Rawlings into the Attorney General’s Office and allegations that Mark Shurtleff and John Swallow sold favors to a slew of unsavory characters. The latter investigation has been covered by The Washington Times and The New York Times, bringing Utah’s dirty secrets and Gill’s determination to air them out onto the national stage. SLCO.org/DistrictAttorney
2. Judge Robert Shelby
3. Ralph Becker

Best Governor of 30 Percent of Us
Salt Lake County Mayor Ben McAdams
While progressive Salt Lake County residents still have to suffer the Happy Valley politics of Governor Gary, in truth, our real governor is Salt Lake County Mayor Ben McAdams. He’s conservative when it comes to tax dollars and progressive when it comes to vision. That’s how his most recent budget raised county employee salaries for the first time since 2009 without raising taxes for everyone else. And because he thinks the county can do more than it’s expected, he also expanded critical preschool services to 600 at-risk kids—again without raising taxes. Keep up the good work, Mr. Mayor, though we in the county might find it hard to share you with the rest of the state when the day comes that everyone else calls you governor, too.
SLCo.org/Mayor

Best Dad Joke
Scott Mackintosh’s Short Shorts
It’s not easy being a parent; sometimes, you have to make a fool of yourself on a national stage in order to get your kids to stop wearing jorts (jean shorts), which is exactly what Utah dad Scott Mackintosh did in September 2013. When his daughter refused to change out of her revealing jean shorts before going out for a family dinner, Mackintosh slipped into a pair of thigh-exposing daisy dukes and a T-shirt that said “Best.Dad.Ever.” The evening was documented on his wife’s blog and then posted to the social-media site Reddit. After that, it wasn’t long before dads around the globe started looking for scissors.
BeckyMacksBlog.com

Best Anchorman
Mark Koelbel, KUTV 2
Early in his Best of Utah winning streak, we suggested that KUTV 2’s Mark Koelbel may very well be the new Dick Nourse, the revered face of Utah news for decades. It was a flattering comparison but, with this many BOU victories (seven, to be exact), it’s time to declare Koelbel his own (anchor)man. The voice, the hair, the delivery, the subtle swagger—he’s an original in a sea of suit & tie clones, and we don’t expect him to hand off this crown anytime soon.
KUTV 2, 5 p.m., 6 p.m. & 10 p.m. weeknights, KUTV.com
2. Ron Bird, KUTV 2
3. Bob Evans, Fox 13

Best Locally Shot Ski Film
4Bi9’s All Damn Day
Some call them “the gangstas of skiing,” but really, 4Bi9 (which stands for 40s, blunts, ice and 9s) is just a group of punk urban skiers, most of whom call Utah home. The past year was highlighted by some great edits, including their full-length All Damn Day, which featured plenty of top-notch urban skiing in downtown—yes, downtown—Salt Lake City and surrounding areas.
4Bi9Media.com