Best of Utah 2018 | An ode to the people, places, products and services that make life the Beehive State exceptional. | Best of Utah | Salt Lake City

Best Utahn
Spencer J. Cox
As Utah's eighth lieutenant governor, Spencer J. Cox is a heartbeat away from the Governor's Mansion. That's appropriate, because the 43-year-old Sanpete County native, indeed, has a generous and expansive heart. Earlier this year, he spent a sleepless night pondering the plight of immigrant children separated from their families. "I hate what we've become," he tweeted. "I want to punch someone." Of course, the tweet went viral. During a local vigil for victims of the 2016 Pulse Orlando nightclub shooting, Cox apologized for not standing up for fellow classmates who were taunted for being gay. In addition, he's prodded employers to hire refugees and helped coordinate Operation Rio Grande. And did we mention he was the first Utah House member to call for the impeachment of disgraced Attorney General John Swallow?
2. Donovan Mitchell
3. Gail Miller

Best Elected Official
Ben McAdams
At press time, Ben McAdams is crisscrossing Utah's 4th Congressional District in an outrageously orange school bus—perhaps a nod to his first job as pumpkin picker when he was 12—to unseat Rep. Mia Love. Pollsters predict a squeaker. Even his critics, however, grudgingly admit during his six years as Salt Lake County mayor, the 43-year-old Democrat has reached across the aisle to get things done. CNN calls his style "pragmatic, wonky and slightly quirky." Well, wonky's OK if you can juggle a $1.3-billion budget—with no property-tax increase. And who can forget McAdams' foray onto the mean streets in the Rio Grande district to experience homelessness first-hand?
2. Spencer Cox
3. Derek Kitchen

Best Podcast
I Am Salt Lake
People over a certain age recall with fondness the "Golden Age" of television, when shows were broadcast live and Americans welcomed the likes of Milton Berle and Jackie Gleason into their living rooms. Well, history might be repeating itself. Podcasts now are the rage, and none is more well crafted than the popular weekly I Am Salt Lake. For the past five years, hosts Chris and Krissie Holifield have prowled the streets, seeking interesting folks in business, art, music, film, food "or anything else [Chris] finds intriguing." So far, they've interviewed more than 300 people, and show no signs slowing down. Who knows? I Am Salt Lake might someday be in the same entertainment pantheon as I Love Lucy.
2. Geek Show Podcast
3. Radio West

Best Nonprofit Organization
Best Friends Animal Society
For 32 years, Best Friends Animal Society has been a global leader in the no-kill movement to protect unwanted and abandoned animals. When it began, some 17 million animals annually were "put to sleep"—one of society's most monstrous euphemisms. Today, the figure is down to four million. But that's not enough, says Best Friends, whose ambitious goal is to "Save Them All." From sponsoring trap-neuter-return programs for feral cats to combatting puppy mills, it's been on the forefront of animal protection. And don't forget the society's crown jewel: The sprawling Best Friends Animal Sanctuary in Utah's red-rock country near Kanab—home to some 1,700 rescued critters.
2. Planned Parenthood
3. Utah Pride Center

Best Political Scandal
Inland Port Authority
It's been called Utah's largest economic-development project—ever. Yet the bill creating the Utah Inland Port Authority was introduced, re-written and ramrodded through the 2018 Legislature on the second-to-last night of the session with no time for scrutiny or debate. Even its sponsors weren't exactly sure what it said. Called back into a special session, lawmakers tweaked the law, but not everyone's happy—especially Salt Lake City Mayor Jackie Biskupski who fears the state is trampling on the city's taxing and zoning turf. After all, the 38 square miles are within SLC's boundaries. Then, outgoing House Speaker and land developer Greg Hughes raised some eyebrows when he appointed himself to the authority board, but soon stepped down. It turns out—surprise!—he owns property nearby.
2. Bears Ears
3. UTA

Best Radio Show
Radio From Hell
"Nothing is certain except death and taxes" ... and that City Weekly readers will overwhelmingly vote Radio From Hell as their favorite show. For the umpteenth year (we've lost count, really), the early morning, four-hour show on 96.3 FM has swept the field. Over the years, hosts Kerry Jackson, Bill Allred and Gina Barberi (with producer Richard T. Steadman in the booth) have become old friends to countless fans. There's never a dull moment with recurring features like "Big Boy News & Opinnuendo" and "Boner of the Day," and Sister Dottie S. Dixon occasionally dropping by the studio. It all began, incidentally, as The Fun Pigs on Ogden's KJQ in 1986, making it one of the country's longest-running shows.
2. Radio West
3. Dave & Deb

Best Radio Station
KRCL
It's a well-documented fact that Donald Trump isn't a fan of reading—though he has an impressive array of flat-screen TVs in his bedroom. But what about radio? It's a pretty sure bet that he wouldn't listen to KRCL 90.9 FM. It's too damned informative. Shows like the thoughtful and sometimes-provocative Democracy Now! just wouldn't turn his crank (or his dial). That's not to say the nonprofit, listener-supported station is overly cerebral. Far from it. Throughout the day and night, DJs entertain with music from their own playlists: Vintage rock to new wave; forgotten favorites to music from around the world. KRCL next year marks 40 years on the air—and here's to 40 more.
2. X96
3. KUER

Best Social Cause
Homelessness
The homeless. Most mornings, you see them sleeping on the edge of Main Street planter boxes or huddled in abandoned storefronts. But for every "vagrant" we encounter, there are dozens more hidden in the dark and desperate shadows of homelessness—including families, children and veterans. In less than 18 months, the county will open three new shelters/resource centers with a capacity of 700. But simultaneously, the 1,100-bed Road Home will close its doors—leaving a 400-bed deficit. The city, meanwhile, has allocated $21 million to subsidize low-income housing construction. Until officials can come to grips with the influx of people pouring into the valley and rising rents, homelessness is going to be a Gordian Knot.
2. Medical cannabis
3. Suicide prevention

Best Sports Reporter
David James
Any die-hard fan can spout statistics and sometimes obscure facts about their favorite sport. But it takes years of up-close observation and interaction to know the real stories behind them. That's why Utahns rely on David James for all things sports-related. He signed on with KUTV Channel 2 in 1992, and in the quarter-century since has built a solid reputation as an authoritative—but never strident—source of sports news. James anchors the station's two "Talkin' Sports" weekend shows, and can be heard on a morning-drive talk show on 1280 The Zone. Even when he disagrees with callers, the genial James is always amiable ... and usually right.
2. Dave Fox
3. Wesley Ruff 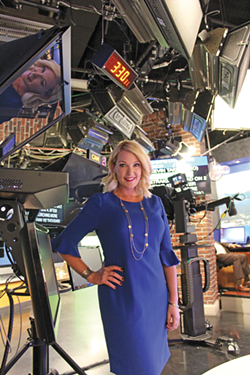 Best TV Anchor
Shauna Lake
For the second year running, Utah media's own iteration of "The Unsinkable Molly Brown" walks off with Best Anchor honors. While Shauna Lake didn't hit an iceberg—as did Margaret Brown's ship, the HMS Titanic—the veteran KUTV Channel 2 anchor overcame some formidable obstacles last year, and came back swinging. Since then, she's dusted herself off and moved on—much to the relief of fans who've come to appreciate her insight and considerable journalistic credentials. Lake, who joined KUTV 2 in 1994, also hosts the weekly "Person 2 Person" and has been honored by broadcast colleagues for her "Wednesday's Child" segment, focusing on adoptable children in the area.
2. Hope Woodside
3. Mary Nickles

Best TV News Reporter
Ben Winslow
If Nike or Adidas were ever to seek endorsements from journalists instead of athletes, they'd be in hot pursuit of Fox 13's Ben Winslow. The bearded dynamo literally sprints from assignment to assignment—tweeting all the way to a growing cadre of followers. While it's all so cutting edge, he churns out old-fashioned solid journalism, too. Since joining the station nearly two decades ago, Winslow has collected scads of accolades, including a national Edward R. Murrow Award, and another from the Religion Newswriters Association. On his Facebook page, he simply says: "I'm a reporter ... covering a lot of politics, courts and polygamy." Then, he adds wryly, "Sometimes those intersect."
2. Chris Jones
3. Morgan Saxton

Best TV News Station
Fox 13
When it entered the Utah television market as KSTU in 1978, Fox 13 initially was regarded as the poor cousin among the local network affiliates. All that changed when it hooked up with Fox, and took off like an Atlas rocket—including its news department. In a few short years, Bob Evans, Hope Woodside (who recently left after 23 years), Dan Evans and crew have earned a reputation for rock-solid reporting. Did we mention Big Budah? Add to that May's announcement that Fox 13 had inked a "new, expansive content-sharing agreement" with news powerhouse, The Salt Lake Tribune. A poor cousin? No longer.
2. KUTV Channel 2
3. ABC Channel 4

Best Weathercaster
Sterling Poulson
For 33 years, Sterling Poulson has been telling local television audiences what Mother Nature has in store. After a stint at KSL Channel 5, he moved to KUTV Channel 2 in 1989 where viewers have come to expect detailed—but understandable—explanations of Utah's notoriously mercurial weather patterns. He cut his earned as a forecaster during a 10-year hitch in the Air Force, including a tour of duty in Vietnam (where the weather is wild, too). Paulson's all-time favorite story was the freak tornado that hit the capital city in 1999. The 67-year-old finds time, too, to direct the 120-voice Choral Society of Utah.
2. Allison Croghan
3. Kevin Eubank

Worst Utahn
Jason Chaffetz
Call him what you may, but former Congressman Jason Chaffetz (last year's Worst Utahn winner) is no shrinking violet. No sooner had he abruptly resigned his House seat last year, the four-term right-wing darling had settled into a comfy commentator booth at Fox News. The ambitious and often abrasive Chaffetz is rumored to have his sights on Gov. Gary Herbert's desk—but "Available Jones" is being coy on seeking a third term. While he ruminates, the 51-year-old has found time to pen a new book on the sinister The Deep State. In it, he writes of scoundrels who "brazenly abuse their power—spying, manipulating and misleading." Yes, Jason, it sounds all too familiar.
2. Mike Lee
3. Mitt Romney