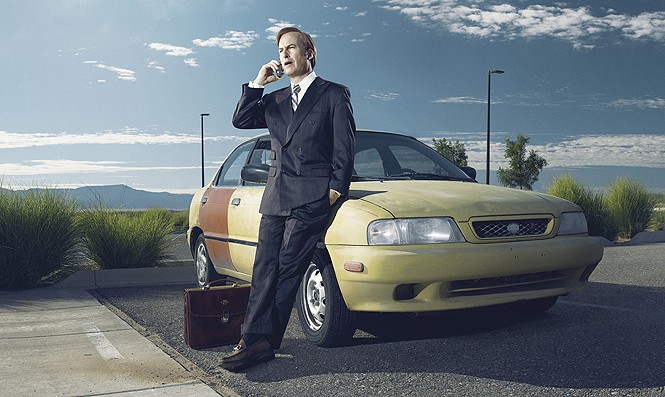 
Series Debut: While the early clickbait reviews touting Better Call Saul as "better than Breaking Bad" may have been premature (only two episodes were made available for preview, fergawdsakes), the BB prequel/Saul Goodman origin story does arrive with more dramatic confidence and stylistic swagger than the introduction of Walter White did all those years ago—showrunner Vince Gilligan knows he's earned all the creative freedom in the world now, and he's not afraid to use it. After a somber glimpse at present-day Saul (Bob Odenkirk) in deep-cover, post-Walt anonymity (Saul did at least achieve the "best-case scenario" he mentioned in Breaking Bad's penultimate episode), we're back in early-2000s Albuquerque, N.M., with small-time attorney Jimmy McGill on the cusp of becoming medium-time local-TV "celebrity" lawyer Saul Goodman. Gilligan and Breaking Bad writer Peter Gould have cooked up an unexpectedly rich backstory for Saul's seemingly one-note comic character; the first episode alone should convince any doubters who saw no sustainable show here. It has all of the panoramic skies, lingering silences and occasionally jarring camerawork (and a couple of familiar faces) that the Breaking Bad faithful have been missing, just with the drama-to-comedy ratio tweaked slightly. But really, don't sweat the Bad comparisons: Better Call Saul is its own thing, and it's pretty damned fantastic. [Better Call Saul continues Feb. 9 on its regular night, Mondays.]


Series Debut: Decades ago, KGB agent Katya (Hope Davis) was given the mission to seduce and recruit an American businessman (Mark Cohen). Instead, she fell in love with him, and the Kremlin just said, "Go ahead and move to the U.S.; we'll be in touch." Guess who now wants a favor from the couple and their newbie CIA analyst son? Allegiance sounds ripped from today's headlines about The Americans, but there are differences: It's not the '80s, theirs isn't a KGB-arranged sleeper-cell marriage, and Davis can't maintain a Russian accent. Still, it's a solidly acted drama that somehow paints spy drama as dull as family drama and, like everything else NBC cranks out these days that isn't The Blacklist, will probably never be seen again after 13-ish episodes.


New Season: So ... what happened? Season 1 of Helix was a tense, claustrophobic Walking Dead/Andromeda Strain mashup set in the frozen Arctic that, while imperfect, still delivered a rush of dread and consequences. Now, four episodes into Season 2, it's like a whole new show taking an uneventful walkabout on the island of Dr. Moreau with two storylines (one in the present, one in the future) competing for my indifference. Did creator/producer Ronald D. Moore (Battlestar Galactica) think the jumping timelines would work here as well as on his other current series, Outlander? Maybe TV has hit the ceiling of apocalyptic dramas and it's time to make some cuts, starting with Helix. Sorry, Ron.


Special: The good news: This year's Rock nominees do, for the most part, actually rock—nary a banjo-beardy in the bunch and, as a bonus, what's left of AC/DC is going to perform. The old news: The Grammys are still an utterly useless barometer of quality music, and LL Cool J is hosting again (is it part of his NCIS: Los Angeles contract, or what?). Also: Does Ariana Grande have to perform on every TV special ever from now until her 2016 expiration date? She does? OK, understood.


Midseason Premiere: When last we left Rick's Rollers, the traveling band of survivors had lost what hope they had for a "cure" for zombie-ism, as well as poor lil' Beth (oh yeah, spoiler). As of press time (a folksy remainder from the good ol' days of print—oh, we're still doing it), AMC had provided only this synopsis for the ninth episode of The Walking Dead's fifth season: "After all the recent trials the group has faced, a slight detour might prove to be the solution they've been looking for." The Grammys?