How a new brewery came to be, with a little help from its competitors. 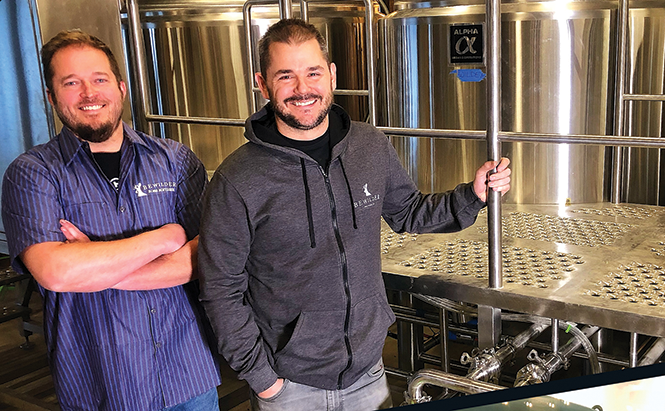 It's indisputable that 2019 will go down as one of the biggest years of change in the history of Utah's craft beer scene. Four brand new craft beer establishments graced our state: Level Crossing Brewing Co. and the Utah Ogden (UTOG) Brewing Co. opened in late March; Strap Tank's Brewery in Lehi opened in early August; and Wasatch County's first brew pub, Heber Valley Brewing Co. opened its doors later that month. Then there was that tiny blip on our beer scene's radar when, after 86 years, Utah made that massive leap from 4% ABV to 5% ABV. But if you think those were the sole changes to Utah's craft beer scene, you're sorely mistaken.

As we count down the days of 2019, there's still one more gift from this already strong beer year: Bewilder Brewing Co., Utah's 40th operating brewhouse officially opened its doors on Dec. 13. Like many of the breweries before it, Bewilder's story has its roots in local kitchens and garages.

Bewilder's co-owners Cody Mckendrick and Ross Metzger first cut their teeth in the beer business in the spring of 2011, when they established Salt City Brew Supply in Midvale. "We always knew that SCBS was going to be a stepping stone to other things," Mckendrick says. "We've been kicking this beer can down the road for about five years, but it was two years ago when we really put our foot on the gas."

And when the pedal hit the metal in October 2018, the two signed a deal to lease an old Salt Lake City factory in the Pioneer Park area. Mckendrick also attended Chicago's Siebel Institute, one of the nation's top brewing schools. "I primarily concentrated on brewery management courses," Mckendrick recalls. "I really didn't want to learn about all of this 'on the job,' having invested our entire lives into it."

There are a lot of different brewery models occupying our market right now. Some serve food, others have nothing; some partner with food trucks, others offer crackers shaped like fish. Metzger's food model is unwavering: "We just want a brew pub with a small kitchen—nothing fancy, just simple food done very well."

But since this is a brewery at its heart, what will Bewilder's suds be like? "Our beer's focus will be on German style lagers and English pub ales," Mckendrick says. "We'll of course have varying styles as well, because people want new and different, just like we do."

Bewilder debuted without an operating brewhouse. "It took longer than expected to get our brewing permit,'' Metzger says. "So we had to get creative and look outside for help." That help came from Utah's brewing community at large. With the assistance of their competitors and colleagues, they managed to keg enough beer for the launch. "We wouldn't be able to open our doors without help from other breweries," Mckendrick says. "We've collaborated with a handful of area breweries to help us serve beers that we had a hand in creating. There's no other industry that I can think of where this could happen."

With a minimum of 18 tap handles—including room for guest and seasonal beers—this year's "brewery No. 5" looks to have a strong future in Utah's ever-expanding craft beer scene. Bewilder is located at 445 S. 400 West. As always, cheers!