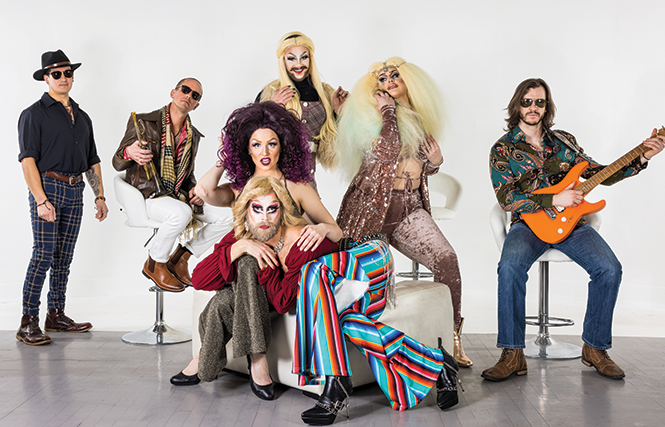 When one thinks about drag, what often comes to mind is the great divas of the pop realm. But drag is a broadly-applicable performance style, and can be applied to all sorts of musical genres and pop-culture tropes. And, it turns out, when drag meets rock 'n' roll, it's a match made in heaven.

Or at least, that's what local drag queen Marrlo Suzzanne is hoping to show with his new project, Marrlo Suzanne and The Galaxy Band. "Before I even started drag, I wanted to start a band," says Suzzanne of his recently outfitted musical project.

The desire struck after seeing the theatrics of the ska punk band Reel Big Fish as a teen. Their high energy left an impression that immediately made Suzzanne start wondering how to start a band of his own. But he had no answer, despite experience in piano playing, marching band and choir.

Time passed, and he found himself in the musical theater program at the University of Utah, on top of some new inspiration in RuPaul's Drag Race. In 2018, he started doing drag on his own, eventually finding a home at Bottom's Up, where he produced shows for six months. Still, he says, "I was like, 'What do I really want to do with this?' I still had those same feelings and desires to create music."

In the slump of the pandemic, time opened up to revisit that desire, though—in particular, at the socially-distanced drag shows JRC Events was organizing at venues like The Urban Lounge. "I started doing live performances; I'd find a karaoke track and sing to it. And then it really hit me like, 'If you want to do a band, you just need to do it. Do it now,'" he says.

Without the busy business of learning new lip syncs, having to do new costumes, routines and hair for the Bottom's Up shows each week, he realized he finally had time to start singing again. Suzzanne broached the idea of a JRC Christmas show featuring himself and, finally, a band. As it stands since that show, the resulting Galaxy Band includes Sequoia, M'lady Wood, Oscar Tina and Skye Dahlstrom all singing and dancing, with instrumentation provided by pianist George Cardon-Bystry, guitarists Garret Rueckert and Mikki Reeve, bassist Andrew Pincock, drummer Aaron Jeffers, trumpeter Jason Lawner and saxophonist Mia Rossmango.

What's next? The Galaxy Band has got two upcoming showings of their American Pie - A '70s Rock Show, which, in a fashion not unfamiliar to the world of drag, will consist of a lot of covers. "Before I started doing the Bottom's Up shows, I started working with one of my guitarist's friends on some covers," Suzzanne says. "I was listening to some '70s soft rock, some folk rock, and I was like, let's get some covers of these. And I ended up having a whole list of '70s folk rock music that we were taking around to open mics—I wasn't in drag, I was just singing regular. ... I want this first show I do to familiarize people with music maybe they've heard, but maybe [not] in a while."

And while Suzzanne admits that his band is certainly not the first or only drag band, he does note that drag lends itself well to the theatrical qualities found in much classic rock 'n' roll. "KISS, for example," he says. "[They're] no different than a drag band, even though they're not drag queens: big hair, big makeup, it's all about the show, it's all about the production. It's very theatrical. Really, that's all we're doing."

Suzzanne thinks this is what makes an amazing show—one where there's not just good music to hear, but choreography, costumes and other visual aspects to be wowed by. Even at that momentous Reel Big Fish concert, Suzzanne remembers the crazy dances the band members did, the trumpets and sax flashing—two instruments non-traditional to '70s rock 'n' roll that Suzzanne's bringing into The Galaxy Band anyway.

When asked whether Marrlo Suzanne and The Galaxy Band are bringing rock 'n' roll to drag, or drag to rock 'n' roll, he replies, "I tell people I'm a singer first and a drag queen second. If I had to quit drag, I would still get on a stage and sing in regular everyday clothes, because that's really what I love the most, but I just love the aspect and spectacle that drag brings to it. So for me I would say I'm adding drag to rock 'n' roll."

That niche is what Suzzanne hopes will gain traction for the band, so that hopefully one day they can tour other cities, or visit big stages with full, high quality production. But for now, they're playing at Metro Music Hall on April 30 and May 1. Besides the usual COVID-era drill (get your tickets early, limited seating, etc.), know that you should see them now, because Suzzanne wants to keep the band scarce; Marrlo Suzzanne and The Galaxy Band are determined to give themselves enough space between shows to develop entirely new acts for their audiences. So don't miss their momentous debut, and visit metromusichall.com for tickets and more info.