Identity Crisis: A loser finds his only meaning in life by being a Big Fan. 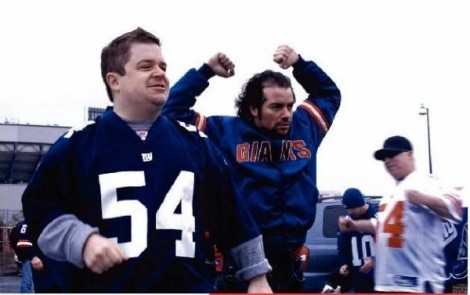 To the extent that it’s possible for any screenwriter to have carved out a niche for himself after only two theatrically released features, Robert Siegel may have done so. He is becoming the 21st century’s cinematic poet laureate of misdirected masculinity.

On the surface, the protagonist of Siegel’s writing/directing debut Big Fan seems to be the polar opposite of the title character from last year’s Siegel-scripted The Wrestler—one is a pro athlete, the other is merely a wannabe. Both characters, however, share a profound neurosis: They’ve internalized an identity that makes them feel strong, but isn’t really in their best interest. And as long as Big Fan focuses on the psychology of one guy’s self-destructive ego—rather than on over-the-top fringe details—it’s a fascinating piece of character study.

That character is Paul Aufiero (Patton Oswalt), and Paul loves the New York Giants. “Loves,” in fact, is too mild a verb. It’s not enough for him to wear the jersey of his favorite player, linebacker Quantrell Bishop. He has to phone in to local sports-talk radio shows and let loose with his meticulously scripted but mundane trash talk. Sure, his job as a Staten Island parking-lot attendant doesn’t actually allow him to afford game tickets, but that doesn’t mean he can’t show up in the stadium parking lot with his buddy Sal (Kevin Corrigan) to watch the action on a TV hooked up to his car battery.

So when Paul and Sal spot Bishop (Jonathan Hamm) at a gas station in their neighborhood, naturally they follow him—and, naturally, their hero-goggles are too tinted for them to realize that they’re watching him buy drugs. When Paul approaches Bishop in a Manhattan strip club and innocently mentions what he’s seen, the player assumes he’s been nailed—and beats Paul into a three-day coma.

What follows is a brilliantly observed exploration of a specific kind of sports fanatic—the guy whose self-loathing has metastasized into connecting his self-worth to the fortunes of favorite team. Paul waffles over cooperating with the investigation into his beating, as Siegel crafts a terrific montage capturing Paul’s reaction to the falling fortunes of the Giants after Bishop is suspended. Oswalt’s performance effectively gets into the head of someone who no longer thinks he has any individual value, other than as part of the Giants’ rooting section; the ringing left in his head after his ordeal is less powerful than the guilt he feels over being “responsible” for Bishop’s absence from the field. And Corrigan provides great counterpoint as an even-lower-status buddy who listens to Paul’s on-air rants with awe and reverence.

Big Fan had all the potential in the world to be one of the year’s most uncomfortably insightful films—if only Siegel hadn’t pushed too far into cartoonish extremes. Paul, you see, isn’t just a working-class schlub; he’s a loser who lives with his nagging mother (Marcia Jean Kurtz), has no girlfriend, and jerks himself off to sleep every night. His brother (Gino Cafarelli), meanwhile, is an ambulance-chasing personal-injury attorney with a trophy-bimbo wife. Siegel clearly wants to establish Paul’s family and personal life as one so pathetic that his only hope for feeling powerful could come from unhealthy attachment to a winning sports team, but there’s a fine line between “pathetic” and “you have got to be kidding me.”

Siegel redeems himself with a brilliantly conceived third-act, in which Paul heads for a showdown with his imagined rival, a Philadelphia Eagles fan (Michael Rapaport) whose talk-radio taunting gets under his skin. Big Fan teases with the possibility that Paul is on the verge of a major breakthrough in self-realization before taking a startling detour leading up to a perfectly pitched final line of dialogue. And just as there was with Randy “The Ram”’s decisions in The Wrestler, there’s a perverse (if delusional) integrity to Paul’s refusal to give up the part of himself that he believes gives his life meaning. Anyone who stands outside the realm of obsessive sports fandom has probably always wondered what these guys are thinking pouring their love into spoiled athletes who wouldn’t piss on them to put out a fire. Thanks to his keen sense for men destroying themselves with their sense of purpose, Siegel lets us know: Being something crazy feels better than being nothing at all.