The coolest way to cook outside 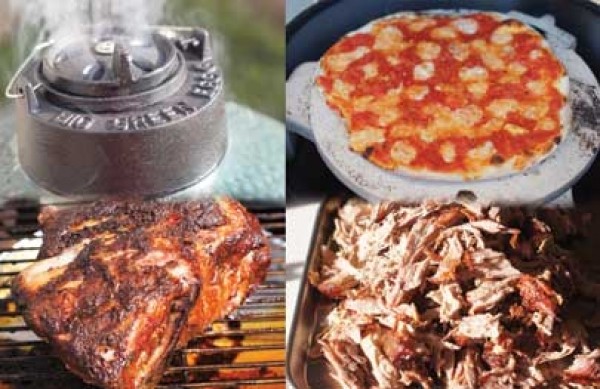 In the previous installment of a periodic series I’m calling The Cooking Chronicles, I wrote about my sous vide cooking adventures. This week, with Fourth of July cookouts in mind, I’m turning my attention to a very different cooking tool: the Big Green Egg.

Periodically, I’d hear professional chefs and amateur cooks—especially barbecue aficionados—rave about their Big Green Eggs. And indeed, there is a population of Big Green Eggheads that is almost cult-like in its unabashed enthusiasm them. So, I figured I’d better check it out.

A little history: The Big Green Egg is an egg-shaped combination grilling/smoking/ baking utensil, designed solely for outdoor use. It’s based on the domed, Asian kamado-style cookers that date back to third-century Japan. U.S. servicemen discovered the kamado cookers during World War II, and some had them shipped home after the war. One such serviceman was Ed Fisher, who began importing the clay cookers for friends and colleagues. He opened the first Big Green Egg store in Atlanta in 1974. Today, the Big Green Egg cooker has evolved with improved ceramics, insulation and heat controls. I decided I needed to try one out firsthand, and the folks at Leisure Living, a Big Green Egg distributor, were kind enough to set me up with a Big Green Egg for testing purposes.

Before we get too far, I should say up front that these things are pricey. The large Big Green Egg model, the most popular, sells for around $800, and a “nest” that allows you to move the thing around—the large size weighs 155 pounds—will run you another $140 or so. And you know what? For those who can afford it, a Big Green Egg is worth every penny.

As I mentioned, the Big Green Egg is heavy. That’s because it’s made of heavy-duty ceramics, with thick walls and nearly airtight insulation. What this means to the cook is that it’s a breeze to control cooking temperatures. I’ve found that I’ve been able to control Big Green Egg cooking temperatures to within about 5 degrees, thanks to a smartly designed ventilation system that allows for as much or as little air flow to the coals as needed.

For example, one of my first experiments was to cook a spatchcock chicken on the Big Green Egg grill. To do this, I wanted to cook the bird (backbone removed) at approximately 350 degrees Fahrenheit. So, I fired up a load of all-natural lump charcoal (you never use cheap charcoal or briquettes in a Big Green Egg), and within about 15 minutes, once the flames had died down a bit, I adjusted the Big Green Egg to 350 degrees by simply using a metal door at the bottom in combination with the patented dual-function metal top—an adjustable “chimney”—which allows the cook to precisely control airflow. Frankly, I was amazed that I could keep the Big Green Egg at exactly (give or take a degree) 350 degrees for the entire time the chicken took to cook (about an hour). Bonus: Since cooking on the Big Green Egg is done with the lid closed, there aren’t flare-ups like you get with most barbecue grills. So far, so good.

One attraction of the Big Green Egg is its temperature range. You can maintain a temperature as low as 200 degrees for slow and low smoking, or crank the sucker up to 800 degrees or higher to sear steaks and such. One of the things I wanted to do was to turn the Big Green Egg into a high-temperature pizza oven, similar to a wood-fired brick oven. So, I purchased a Big Green Egg pizza stone accessory ($39) and loaded the baby up with quality lump charcoal. With all the vents wide open, the Big Green Egg quickly reached a blazing heat; the thermometer (which only goes to 750 degrees) was maxed out, but I’m guessing the temperature was closer to 900 degrees. I popped a Margherita pizza onto the hot pizza stone and closed the lid, and within a couple of minutes I had a perfectly cooked, crisp-crust pizza that would be the envy of most pizzerias.

Next, I experimented with burgers, sausages, grilled fish and such. All came out terrific. However, as with most charcoal grills, it’s often a pain in the ass to start a fire just to cook up a few burgers. So, I still prefer to cook those items on my gas grill, where I can just turn a knob to get started. But, for grilling steaks at Ruth’s Chris-type temperatures, the Big Green Egg can’t be beat.

I was told by Big Green Egg connoisseurs that I should wait to attempt smoking in it until it had been used for grilling a few times; the ceramic innards need to be “seasoned” from smoke and such. So, I waited. Finally, the Big Green Egg was ready for a smoking test.

I’ve used inexpensive store-bought smokers before and found them almost impossible to control, heat-wise. They fluctuate so much, and there’s the need to continually add charcoal, something that is impossible with the Big Green Egg. Thankfully, there’s no need to add additional charcoal when smoking with the Big Green Egg. The temperature control is so precise and the egg is so large that you can load up a mountain of coal to last the entire day.

With great anticipation, I placed a big Boston pork butt into the Big Green Egg and adjusted the vents to maintain a temperature of 250 degrees. To my amazement, the temperature didn’t fluctuate more than about 5 degrees during the seven hours the pork butt took to cook. I’ve never had this kind of success smoking anything before.

In a nutshell: Yes, it’s expensive, but I absolutely love the Big Green Egg. Now I understand where all those cultish Eggheads are coming from.