Big Shiny Robot and the Multiverse of Madness!

The current "alternate timeline" trend of comic-book television and movies comes from a long tradition. 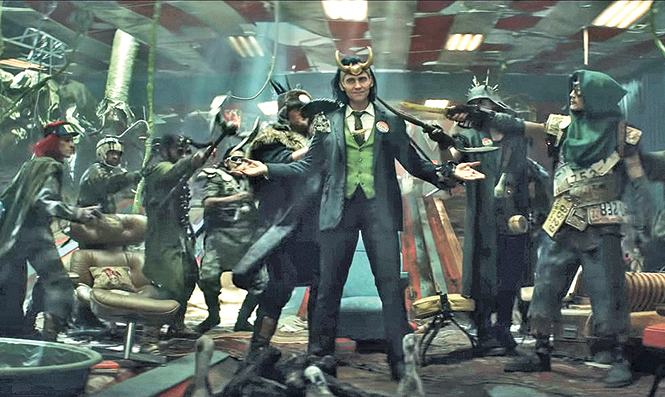 There are scientific hypotheses in the real world of theoretical physics that posit an infinite number of universes parallel to ours. Each one would vary in different ways from ours. If I were to make a decision to turn left, there would be a parallel in which I turned right, and so on.

It's a notion that has captured the imagination of science-fiction writers for decades. The original Star Trek series gave us the evil parallel universe, initially made famous by evil Spock with a van Dyke. The modern iterations of Doctor Who trapped Rose Tyler in an alternate dimension where she had never been born.

In comic books, however, the tradition is even more dense. The DC comic book universe brought us a being called the Monitor, watching over the entirety of the DC multiverse. There was even an Anti-Monitor to watch over the anti-matter universe. From the very earliest iterations of DC Comics, the Justice League and the Justice Society have occupied separate universes; their iterations of Superman and Green Lantern were drastically different in age and demeanor. One of DC's landmark events in the 1980s was the Crisis on Infinite Earths, which shattered and combined the DC multiverse. This became a tradition for them, and now there's a "crisis" every few years to clean up the varying parallel dimensions in that continuity. They even did an on-screen adaptation of this recently in their CW television offerings.

The universe that might have the most multiverses, however, would be those from Marvel. The standard comic-book universe we know is designated as the 616 universe. The Marvel Zombie universe sees a version of the 616 universe ravaged with superhero zombies. There's the Ultimate universe, where the Miles Morales iteration of Spider-Man comes from. Indeed, the entire movie dedicated to Miles, Into the Spider-Verse, explores what happens when different iterations of Spider-Man from different parallel universes get together to kick ass and take names.

It's no wonder, then, that the Marvel Cinematic Universe—another parallel universe running alongside the other continuities—is delving into the multiverse as well. Our first glimpse came in Avengers: Endgame, where Captain America gets to live a quiet, separate life on a different timeline. That idea is carried forward in Loki, the recent Disney+ show that brought Tom Hiddleston's iteration of Thor's brother back from the dead and onto television. After stealing the cosmic cube in Avengers: Endgame, he's picked up by the Time Variance Authority, an agency responsible for keeping the timeline running along one single path in the Marvel cinematic universe.

With the Marvel Cinematic Universe pushing almost 30 films and several television shows now, is it a cheat to be able to bring characters back to life this way? Is it wise to potentially confuse audiences that can barely keep track of one cinematic universe, let alone dozens of parallel ones?

Marvel is betting on it being more wise than foolish. The next Spider-Man movie has taken a page from the multiverse book and cast villains from previous iterations of the franchise to appear for the first time opposite Tom Holland's version of the character. And the next film starring Doctor Strange is actually called Doctor Strange and the Multiverse of Madness. It seems like a lot to keep track of now, but the storytelling potential is huge—and Marvel, which has guessed right so far in building their big, movie spanning stories, is putting all their money on the unified theory of the comic-book multiverse.

Loki, Spider-Man, and Doctor Strange are just the beginning of the time-traveling, universe-hopping escapades we can expect, especially since it introduced the time-hopping villain Kang the Conquerer in Loki's first-season finale. He's a Fantastic Four villain, and the Fantastic Four themselves have been hinted at as part of the culmination of Marvel's "Phase Four." As the first family of comic books, the Fantastic Four are no strangers to exploring the unknown and crossing from one parallel dimension to another, using real science as a backdrop.

Since it's so common in the landscape of comic book storytelling, I doubt anyone will have a problem following it, and it will create all kinds of fun opportunities in storytelling. Playing in the multiverse is the wave of the future. Even DC is getting in on it again for their upcoming Flash movie; rumors abound that the scarlet speedster's upcoming film will even bring Michael Keaton back as Batman.

And if this trend brings us back the Batman, then how can we possibly argue with that?