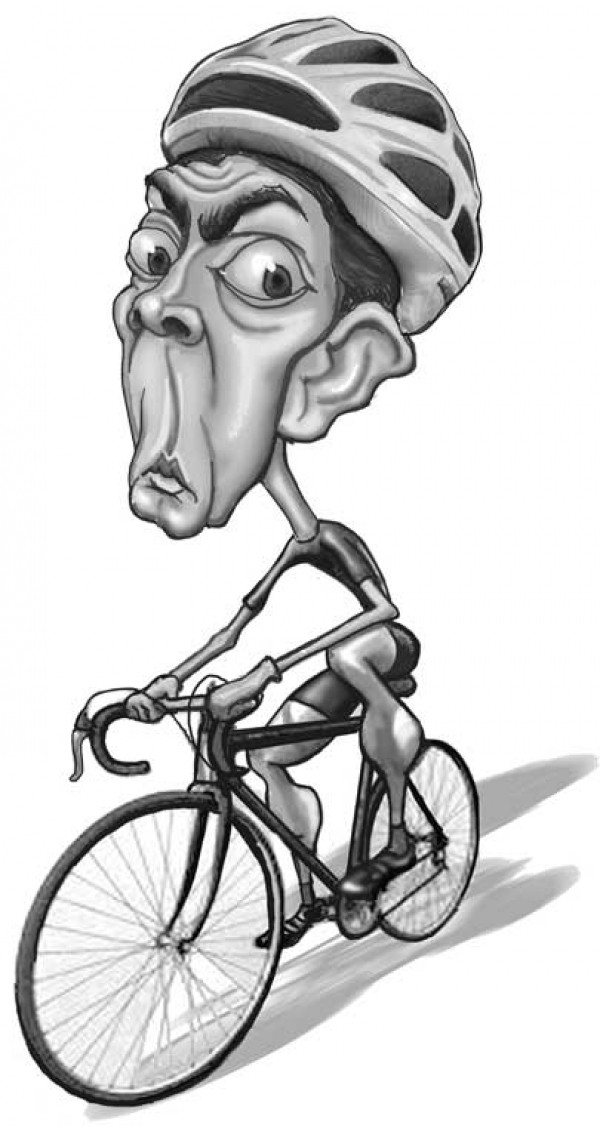 Recently, the matter of bicyclists obeying laws of the road has come to the fore. On one side are Salt Lake City law-enforcement officials, who announced that they will be stepping up efforts to ticket bicyclists who fail to obey the law, either by disregarding stop signs and red lights, or by riding two, three or four abreast along city thoroughfares, bellowing inanities as they go their merry way.

On the other side are bicyclists who self-righteously contend that they are above the law and that they are entitled to coast, glide or accelerate through stop signs, blast through red lights, ride shoulder to shoulder in as many numbers as they see fit and flip off motorists endangered by their antics. (One recent letter to the editor in the local daily newspaper cried persecution by the police because she had been ticketed for running a stop sign, even though, to hear the bicyclist tell it, she had thought about slowing down. How dare a cop give her a ticket!)

Caught in the middle are the motorists, pedestrians and homeowners who, every day, find themselves exposed to the entitlement, rudeness and form-fitting spandex girdles of the bicyclists.

As luck would have it, a scholarly monograph on urban bicyclists came across our desk last Friday. The article, written by distinguished sociologist and avid pedestrian Dr. Aldeni Ensernos, appeared in the June issue of the Journal of Urban Transportation. The title of the scholarly piece is “A Study of Homo Bicyclitus: How the People in Spandex are Ruining Our Roads.”

A key section of Dr. Ensernos’ incisive study is titled “Entitlement Creep” and, as the title implies, examines the mindset of a typical bicyclist. (It should be noted that “creep” in this instance refers to the gradual spread of entitlement among the bicycling population, not to the annoying and/or repulsive behavior of the typical bicyclist.)

What follows is an excerpt from “Entitlement Creep”:

Various hypotheses have been put forward to explain the sense of entitlement displayed by bicyclists in the urban setting. (I am currently engaged in gathering materials for a study of bicyclists in natural settings, whether mountainous, desert or aquatic.) I will examine each hypothesis in ascending order of probability.

The Deterministic Hypothesis. This particular hypothesis has many adherents and is often referred to as the Purdue Hypothesis, due to the fact that its originator was professor Melvin Purdue of Fordham University, not to be confused with the Fordham Hypothesis, popularized by Syd Fordham of Purdue University. Broadly speaking, Purdue claims obnoxious bicyclists were born obnoxious and found that bicycling offered the most scope for obnoxiousness. Entitlement fit them like a spandex girdle.

The Pedaling Herd Hypothesis. There are myriad sources for this idea, ranging from Pliny the Elder to Karl the Junger. According to this hypothesis, also known in the vernacular as mob psychology, any time human beings aggregate in sufficient numbers, mental and moral functions plummet dramatically. Ordinarily reasonable, morally responsible and civic- minded individuals will do things in a group that they would never in a million years do on their own.

Though it has yet to be witnessed in the field, scientists speculate that a single cyclist may at least think of obeying the law, as in the case of the self-righteous cyclist described above. Once two or more urban bicyclists, however, are gathered in the name of spandex, all decorum and decency, as well as modesty, is jettisoned like PowerBar wrappers at the side of the road.

The Spoiled Child Hypothesis. This highly plausible hypothesis posits a connection between stunted maturity and entitled cycling. Researchers in the field report behavior by urban bicyclists that is indistinguishable from that of big babies. As one scholar put it, “The terrible 2-year-old toddler easily morphs into the me-me-me, screw-yourself entitlement of a spandexed bicyclist.

The Silly Costume Hypothesis. This hypothesis can stand alone, or may be considered as an assimilation and expansion of the foregoing hypotheses. According to the Silly Costume Hypothesis, bicyclists have an innate predilection for playing dress-up, as demonstrated by their multicolored habiliments; they are most comfortable as interchangeable units in an irresponsible aggregate, and their anonymity gives them license to behave like babies. Me stop at red light? It’s not fair!

Finally, exciting research is underway on the behavioral effects of constrictive spandex girdles and the diaper-like properties of regulation chamois inserts. It is hypothesized that those constrictive accoutrements synergize with bicycle-seat frottage and lead inexorably to obnoxious entitlement.