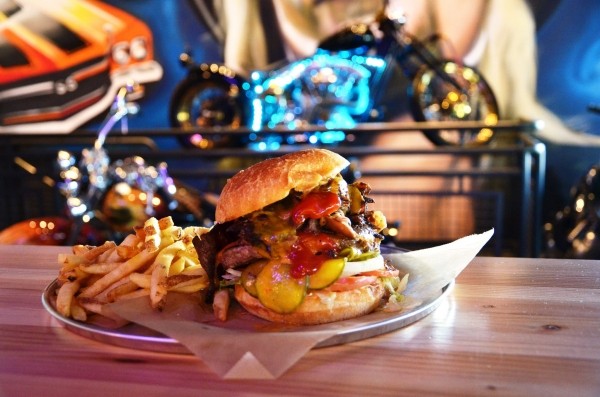 Detroit has always been a gritty city, a place of grime and gumption—not as tame as more esthÃ¨te metropolises like Los Angeles, Miami or even New York, which has become gentrified nearly beyond recognition. So it’s not surprising that the Motor City spawned the in-your-face sounds of MC5, Iggy & the Stooges, The White Stripes, Eminem, Kid Rock and Motown. Lately, though, Detroit could be compared to a heavyweight fighter who’s on his last rubbery leg: staggered and woozy but not quite knocked out.

Why all the talk about Detroit? Well, it’s because Park City restaurateur Bill White, who hails originally from Michigan, has, with his newest venture, Billy Blanco’s, created a vibrant homage to the Motor City—a place of fast machines, no-nonsense food and loud music.

Through the years, I’ve met some pretty high-flying, big-name chef- restaurateurs—the likes of Mario Batali, Tony Bourdain, Emeril Lagasse, Jean-Georges Vongerichten, Charlie Trotter and the late Jean-Louis Palladin. However, I’ve never met a more intelligent restaurateur, or one as hard-working, as Bill White. Each of his restaurants is unique—Grappa, Chimayo, Windy Ridge Cafe & Bakery, Wahso, Ghidotti’s, Sushi Blue—and each is successful. That’s quite a track record in such a fickle industry.

And yet, when I first heard that the concept behind White’s new Billy Blanco’s was “Motor City Mexican,” I balked a bit. The complete restaurant name is Billy Blanco’s Motor City Mexican Burger & Taco Garage. Well, White is known primarily for refined, high-end cuisine, and suddenly he was talking about tacos and fried chicken; “Don’t expect to find seared ahi tuna on the menu,” he forewarned. When I heard he’d commissioned a “tagger”—a graffiti artist—to create wall-size murals of the likes of Kid Rock, I really thought White had lost it.

Then I visited Billy Blanco’s. And, like all of White’s restaurants, this one is totally distinctive and totally stunning—particularly if, like me, you’re a fan of fast cars and motorbikes.

Only Bill White would purchase a brand-new Shelby GT, Ducati racing bikes, tricked-out Harley-Davidsons and vintage cars like a mint Dodge Charger for “décor.” The entire base and coolers of the centerpiece bar at Billy Blanco’s is constructed from heavy-duty, high-end, chrome-plated toolboxes, the type you see at NASCAR races. He bought an old mill in Kamas just so he could “harvest” the chain pulleys, tractor gears and other heavy metals that he incorporates into the design of Billy Blanco’s. The door to the men’s restroom is equipped with a gas-pump handle. The booths have classic ’60s-era racing stripes, and the sportscar-style bar seats were designed by White himself, who also knows how to wield a welding torch.

And yet, the place isn’t kitschy. “Just because you can serve food on a hubcap doesn’t mean you should,” said White, quoting a wise colleague. You know who’d really love Billy Blanco’s? A muscle-car enthusiast like Guy Fieri.

But Fieri would also like the food, because—as with every Bill White eatery—the dining experience is as much, if not more, about flavor as ambiance. He’d also like the prices, and so will you. Billy Blanco’s serves up hefty portions of rock-solid comfort fare at prices that aren’t usually associated with the name Bill White. You will leave Billy Blanco’s neither hungry nor broke.

The menu is composed primarily of Mexican-inspired fare such as burritos, tacos, fajitas, carnitas and such, along with south-of-the-border-flavored soups and salads, and an array of sandwiches, ribs, wings and burgers. The dry-rubbed ribs ($2.75 each) are spectacular: hardwood-smoked and served with South Carolina-style barbecue sauce or smoky-sweet sauce, both made in-house. Just as tasty a starter are the Buffalo wings ($12), a generous serving of meaty wings spiced with Tapatio hot sauce, but not slathered in it; they come to the table dry and delicious.

While you enjoy Billy Blanco apps, I highly recommend a cocktail: the Motor City mojito was a big hit at our table, as was the Pimp My Ride margarita, an incendiary cocktail that pits sweet grilled pineapple against smoked habanero peppers. Blanco’s also features a “Beer & a Shot” special for $7: a pint of draft brew and a choice of a number of liquors, including Espolon Reposado Tequila, Jagermeister, Kraken Black Spiced Rum, Jack Daniels Honey and others.

Until visiting Billy Blanco’s, I’d never tasted fried chicken that I loved more than Thomas Keller’s buttermilk fried chicken at Ad Hoc. Well, Billy Blanco’s GT 500 fried chicken ($13) is right up there with Keller’s: a breast and thigh marinated in buttermilk, fried till perfectly crisp but tender and juicy inside, and served chicken & waffle style with sweet and tangy chile-pecan-chipotle honey. It came—as do most of the dishes—with a choice of rice and beans, french fries, tater tots, greens or coleslaw. The french fries were excellent, but the housemade tater tots with a cheesy dipping sauce were killer.

Good luck getting your lips around the gargantuan Benji burger ($16). It stands about half a foot high: one-third pound of Angus beef chuck, bacon, shaved barbecue short rib, a choice of cheddar or blue cheese, lettuce, mayo, tomato and onion on a high-quality grilled bun from Windy Ridge Bakery. We ate ours with a knife and fork. The mahi-mahi po’boy sandwich, too, is ginormous ($12). It’s four battered and fried crisp strips of tender mahi-mahi served on a hoagie-type roll with shredded lettuce, pico de gallo, housemade pickles and jalapeño remoulade. And that, my friends, just begins to scratch the surface of Billy Blanco’s.

Bill White: Never bet against him.