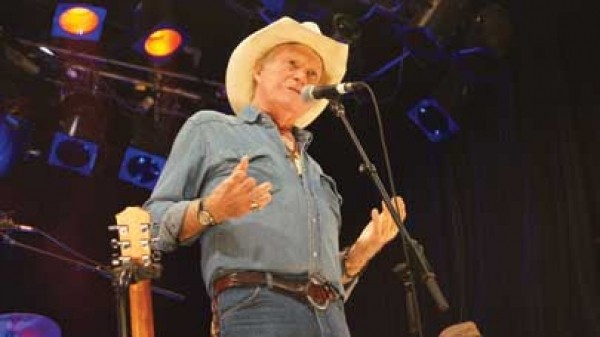 Billy Joe Shaver would make a great wingman. He’s seen more honky-tonks than a beer distributor and, even at 73, he can handle himself in a bar fight. He’s a high-spirited rascal with an easy manner and plenty of sly homespun wisdom, not to mention a legendary country songwriter.

The self-described “Wacko from Waco” speaks from his bedside, next to his three-time ex-wife.* She’s known him a half-century and could tell you debauched stories about Shaver and his cronies Townes Van Zandt, Kris Kristofferson and Willie Nelson. When Shaver hands the phone to her, she says, “He wants me to say ‘motherfucker.’ ” She cackles and hands the phone back.

“Divorce ain’t working out. I don’t know what to do about it,” Shaver laughs. “I guess we’ll just wallow in sin.”

He’s a force of nature. Shaver lost a couple fingers to a lumber mill, and still taught himself guitar. He lost his guitarist son, Eddy, to a drug overdose 12 years ago, and nearly died himself a year later after suffering a heart attack onstage. Nothing slows him down.

“I still go full bore. If I go down, I go down. Every once in a while, I need to have more shrapnel put in me. I’m holding up, but I have just one speed: wide-open,” Shaver says. “I actually feel better [than when I was 30]. I was doing a bunch of drugs and stuff. Now, I’ll probably die in the middle of sex.”

Shaver’s grandmother raised him, but he’d visit his mother at the honky tonk where she was a waitress. Those memories were infused into Honky Tonk Heroes, the album that made Waylon Jennings and launched Outlaw Country. Shaver wrote 11 of the 12 songs.

Shaver met Jennings at one of Willie Nelson’s famous Independence Day blowouts and played him “Willy the Wandering Gypsy & Me.” Jennings said he wanted to record it, and Shaver told him that he had more. When the booze wore off, Jennings proved slipperier than the prison soap. After chasing Jennings for months, Shaver finally found him in his studio with his biker entourage.

“I told him I was going to whip his ass if he didn’t at least listen to the songs,” Shaver says. “He took me in the sound room, and said, ‘All right, play me one song. If I don’t like it, you’re getting out of here, and I’m never seeing you again.’ Well, that’s fair enough, and I played him ‘Ain’t No God in Mexico.’ Then, he said, ‘Let me hear another one.’ By the time I got through five of them and down to ‘Honky Tonk Heroes,’ he slapped himself on the knee and said, ‘Well, I know what I got to do.’ ”

Those songs are as vibrant today as they were 40 years ago. And so is Shaver. His terrific new album, Live at Billy Bob’s Texas, features two new originals. The first is a powerful anti-war song, “The Git Go.”

The other, “Wacko from Waco,” was co-written with Willie Nelson. It recounts a 2007 incident where Shaver shot a man outside a bar in a disagreement. (Shaver was acquitted of wrongdoing.) Dale Watson turned it into a minor hit with “Where Do You Want It,” which perennial bad-ass Shaver allegedly asked before shooting the man.

“He’s still got that bullet in his mouth. So, Willie wrote this song, ‘I Just Want My Bullet Back,’ and I guess I’m going to have to record that one, too,” Shaver says with a laugh. “I don’t know how long this shit’s going to go on.”

Shaver’s recording a new album with Todd Snider, due out in February. He’s excited about the songs, but he’s not about to get ahead of himself.

Editor's Note: A previous version of this story gave an incorrect name for Shaver's three-time ex-wife.