Birding on the Jordan River

Searching for the yellow-billed cuckoo 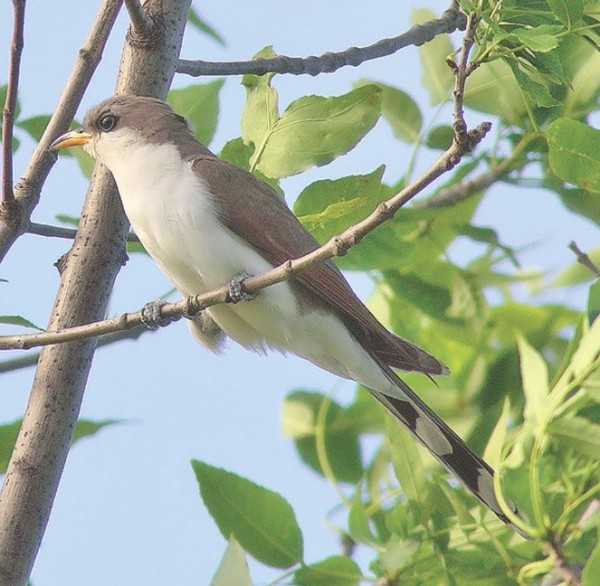 I’m working my way between trashcan-size balls of sagebrush. They’re just starting to leaf out. The smell is divine. A few yards away, the Jordan River, my destination, looks more like a marsh than a river. It’s a rare section of riparian wetland on the Jordan, one of the few not filled in with dirt for development.

I move toward the still water. Above my head, the air is a flurry of wings and anything but still. Emerald-colored tree swallows and their brown cousins, cliff swallows, dart through the air. Red-winged blackbirds call from their perches atop cattails and phragmites fronds. Canada geese slip about in the water on the pond’s far shore. An American avocet wades in the shallows dipping for food. But there is no sign of a yellow-billed cuckoo.

Normally, I’m not a bird watcher. My avian outing came about after a random Internet finding piqued my curiosity. I had come across the site for the 15th-annual Great Salt Lake Bird Festival (May 16-20). Scanning the festival schedule, I couldn’t find an event that I didn’t want to go to. There was a burrowing owls field trip, a behind-the-gates tour of Farmington Bay, and then there was Frank Howe’s workshop Cuckoo for Cottonwoods.

“The yellow-billed cuckoo is a rare and elusive riparian dweller in the West,” reads the opening of the blurb for the workshop. “It is primarily a species of the tropics, but comes to Utah for a few summer months to breed.”

Wanting to try my hand at finding this “fascinating and enigmatic” bird, I decided to go for a drive the next day to a little-known section of the Jordan River near the Utah State Prison: the Arrow Trailhead, the final stop on the Jordan River Parkway. Despite the highway and encroaching subdivisions, it is an ideal spot for birding.

From the trailhead, I followed the Jordan River down long oxbow meanders. Portions of the bank, the river’s ancient flood plains, lay bare, showing only salty, white soil and nests of sun-dried driftwood. Where vegetation sprouted, invasive non-native plants—tamarisk, Russian olive, cheatgrass—choked the banks. Occasionally, the smooth, pale pink branches of a native willow emerged from the mesh of woody stems.

And then I arrived, at the edge of the wetland—swallows swooping, avocets poising delicately. I scanned for the yellow-billed cuckoo, a plain little bird about the size of a robin with a bright white belly and a brown back. I looked for its dual-colored bill, the upper half black, the lower half yellow. I looked, but I couldn’t find her.

“ ‘Ka-ka-ka-ka-kow-kow-kowlp-powp-powp’—that’s what you would have heard if there had been cuckoos,” Howe explained to me after my failed birding attempt. I had called up the expert to find out what went wrong. Turns out, my timing was all off. Cuckoos are one of our latest-in-the-season migrants; most won’t get here until June. And there was another problem: Cuckoos like riparian habitat with cottonwoods where they find their favorite food, tent caterpillars, among the tree branches. I had found a riparian wetland, but no cottonwoods.

Pioneer accounts of early settler life in Utah often mention the cuckoo. It’s the only way people like Howe can guess that the birds were once numerous, and are now in serious decline. Much of their disappearance is attributed to loss of habitat. According to Howe, Utah has already lost 80 to 95 percent of the cuckoo’s riparian habitat. The bird is on track to become a federally listed endangered species, possibly within the next year.

In another month, I will try again to find the yellow-billed cuckoo, now that I know where to go. The birds disperse in small numbers all over the state, from St. George to Moab to Park City. I am considering a spot near the Jordanelle Reservoir. And I’ll make sure to remember my binoculars.