Lawmakers struggle to fight STDs while keeping condoms out of schoolbooks. 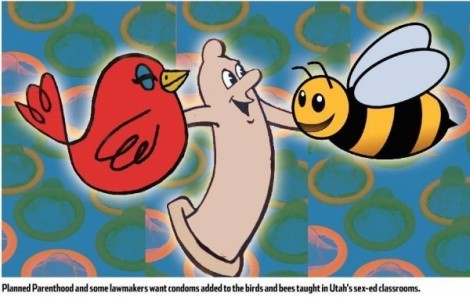 Add Parents for Choice in Education to the voices Utah lawmakers are hearing on sex education.


The Parents are the people who brought Utah the voucher law that was passed by the Legislature only to be slapped down by voters in 2007. Now, the group is urging its e-mail list of 10,000 to contact lawmakers over proposals to rework Utah’s sex education curriculum to allow discussion of contraception.

Parents for Choice in Education hasn’t taken an official position. But the group’s supporters “are concerned that the government does not interfere in what should be parental roles and responsibilities,” says Judi Clark, executive director. “What’s key is public education suddenly stepping in and saying to parents, ‘You aren’t doing a good enough job, so we are going to parent your children in this aspect.’ That shouldn’t be something that’s handled lightly.”

Faced with an alarming increase in sexually transmitted diseases, Utah has gradually been loosening restrictions that traditionally took a don’t-ask-don’t-tell approach to public school information about sex. Two years ago, the Legislature appropriated money for a public health anti-SDT education campaign that was launched this spring. In June, the state Board of Education changed the school sex-ed curriculum to explicitly include information on STD testing.

Now, a legislative health committee is looking at what some say is the next logical step—allowing “comprehensive” sex education in the public schools—comprehensive meaning contraception.

Utah’s abstinence-based sex-ed curriculum isn’t much different from programs that have taken off at public schools throughout the country. The main difference is teaching about contraception.

In Utah, teaching about contraception is allowed in theory, but “the advocacy or encouragement of the use of contraceptive methods” is expressly banned.

That leads many Utah health teachers to skip any mention of contraception rather than risk getting fired or put in jail, says Rep. Lynn Hemingway, D-Salt Lake City. A Herriman junior high school health teacher was fired in 2008 for allegedly blurring the line on issues such as contraception and homosexuality. Following the incident, Rep. Carl Wimmer, R-Herriman, toyed with a bill that would have made condom advocacy a crime.

Missy Bird, executive director of the Planned Parenthood Action Council that has been lobbying the sex ed changes, argues the abstinence curriculum ends up discouraging the use of condoms among students, since the only thing they end up learning are condom failure rates. A 2007 analysis of abstinence-only education commissioned by the George Bush administration found students in abstinence classes were no less likely to have sex.

In the 2009 legislative session Hemingway ran a bill for Planned Parenthood that removed the implied threat about teaching contraception while keeping a sex-ed program heavy on abstinence. His bill got one committee hearing during which the language he’d taken out was put back in before the bill was tabled. But, after meeting with his conservative colleagues, Hemingway is back with a new version he hopes will be more palatable. It can’t be that bad, he argues. For one thing, the law he proposes for Utah is based on a sex-ed law in North Carolina, a state traditionally as sexually conservative as Utah.

Hemingway’s new bill would create a two-track system. Some students would get abstinence-only, others would get comprehensive sex education and parents would choose which class their children attend.

It’s what Parents for Choice in Education says it wants, says Hemingway. “What we trying to do is give parents the choice.” But the change also would give parents who want their children getting the full birds and bees a choice as well, he argues.

“In the state of Utah, we have 12 teenage girls getting pregnant every day, cases of chlamydia continue to climb with no decline in site. The abstinence-based curricula they are teaching now isn’t dong the job,” Hemingway says.

He will have to jump hurdles just to get the bill out of committee. Sen. Chris Buttars, R-West Jordan, is chairman of the Health and Human Services interim committee that is hearing the bill this summer. Rep. Paul Ray, R-Clearfield, chairs the House health issues committee that will hear the bill during the 2010 legislative session.

Ray gives Hemingway credit for coming back with a compromise. He says he and his committee are open to listening. “It’s obvious with the increase of STDs and teen pregnancies, something needs to be done,” Ray says. “The question is going to come down to: Is it something we want in the school?”

A new study by the Utah Department of Health found a 50 percent increase in chlamydia cases in a five-year period ending in 2007. Half of all reported cases were young women between the ages of 15 and 24. The percent of the Utah population with chlamydia and gonorrhea remain below national averages, but the rate at which the diseases are growing is among the fastest in the country.

Ray says one alternative to fighting STDs in school are programs in community health centers. Two years ago, the Legislature passed a bill sponsored by Rep. Phil Riesen, D-Salt Lake City, that appropriated $175,000 per year for an STD public-information campaign. But the bill passed with a caveat that none of the STD pamphlets could be distributed in the schools.

Bird says she frequently hears that argument, but it doesn’t pass muster. “We already have sex education in schools,” she says. “It’s called abstinence.”

“This is more than a moral issue,” she says. “It’s a public-health issue, and it could become an ethical issue if we are withholding valuable information from young people that is life-saving.”