Birds of Our Lives

Dramatic tales of life and parenting are on display at Tracy Aviary's flamingo exhibit. 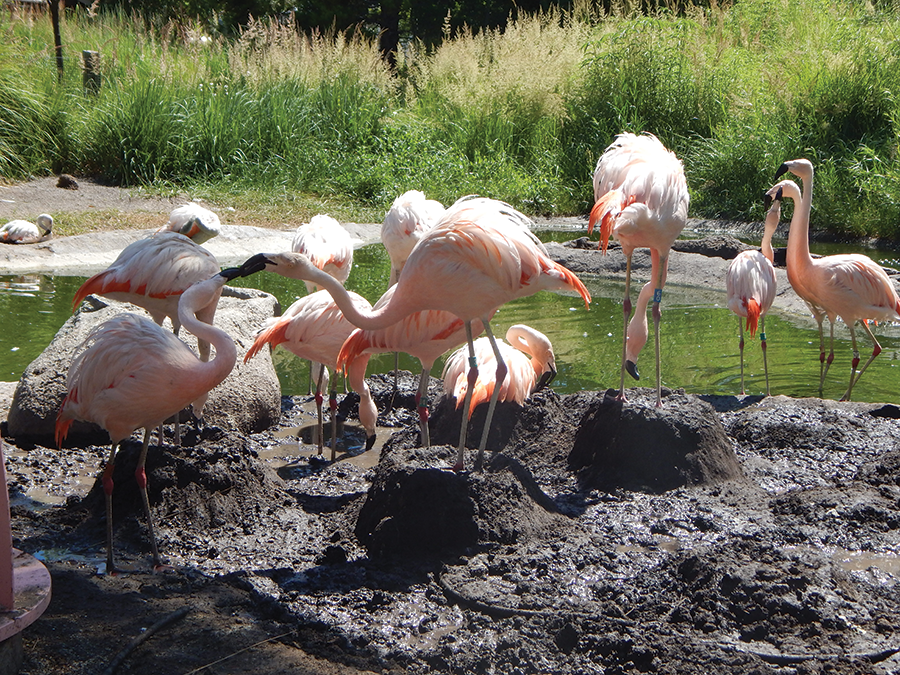 Allie Connair has high hopes for Tan 24 and White 95. According to Connair, the primary keeper of Tracy Aviary's flamingo flock, these two Chilean flamingos have been a model of success during breeding season at the Liberty Park aviary.

Some birds have been lazy about building the volcano-shaped mud mounds necessary to lay and incubate eggs. But Connair says Tan 24 and White 95—so named for the color- and number-coded bands tied around their thin legs—worked tirelessly in recent weeks to make a "picture-perfect" mud nest, taller and rounder than all the rest.

The birds are both male, so they can't lay eggs. But they've proven capable on the parenting front: When Connair gives them plaster eggs designed to mimic real ones, they'll split the caretaker duties equally and always treat the eggs gently with their beaks.

"During breeding season, they are the first to pair off with each other," Connair says of the couple. "It speaks to something for me. They have to be doing something right." The Tracy Aviary's 21 adult flamingos began their annual mating rituals in March. Since then, the goings-on at this muddy, sunny, waterside enclosure have been as eventful as any season of your favorite serial, with dramas of youthful abandon, inter-species mischief and domestic triumph playing out all the time.

"This whole flock is kind of like a soap opera," Connair explains. "You try not to take your work home with you, but every day I'm like, 'Oh my gosh! They were doing this today.'"

On a recent Wednesday morning, the pink birds—26 in all, including five too young to start breeding—are kicking back in the mud, presiding over their nests and occasionally honking their beaks. Most have been hard at work building their nests in recent weeks, and now, aviary staff are waiting for the flamingos to get it on and lay some eggs.

This particular day, it seems magic is about to happen. In a shallow pond of water, one bird comes up behind another and tries to mount her. But she quickly brushes him off with a honk of the beak and a swift flap of the wings.

The aviary's flamingo enclosure is designed to resemble the flock's natural habitat, which spreads along the coasts of Ecuador down to the scrub plateau of southern Chile and Argentina. There's a green pond and shady plants. Several species of South American waterfowl also call the place home, and wild mallards occasionally drop in for a swim. According to Connair, one goose who's no longer at the aviary recently became "best friends" with a young flamingo. He later taught the other flamingos how to steal pellets from the duck feeder.

"Whenever they want a snack they're not supposed to have, they can go over and shake their own pellet out," Connair says of the newly learned trickery.

Flamingos have been living at the aviary since the 1980s. According to Kate Lyngle-Cowand, Tracy Aviary's curator of exhibit collections, the mountainous elevations and salt deposits of the Salt Lake Valley resemble the salt lagoons and soda lakes this specific flamingo species traditionally calls home.

In 1988, one famed flamingo escaped from the aviary and settled in the Great Salt Lake. Pink Floyd—as he would soon be called—was born in captivity but held his own for nearly two decades in the wild, subsisting off the Salt Lake's brine shrimp. Utahns reveled in the legend of Floyd; one community group even tried to establish a South American flamingo colony in the Great Salt Lake in 2003, though they soon abandoned the effort over concerns about pollution and the area's already fragile habitat.

Tracy Aviary opened up its current flamingo exhibit two years later, featuring a flock big enough for breeding. Collectivist by nature, Connair says the birds do everything together, staying tightly packed to protect against predators. They bicker among each other about territory only when they stick their beaks in each other's personal space—something one younger male-male couple has been doing a bit too much lately. "We do see copulation out there on occasion, but not with all of our pairs. Sometimes, they might do it at night ... it's something I'd look into a little bit more." —Kate Lyngle-Cowand tweet this

"They're really trying to learn and see the behaviors and pick them up, but they're just kinda young and clueless," Connair says of Blue 57 and Blue 53, who both turn 2 next month.

Flamingos typically start mating after winter. The months-long process begins with them signaling interest in each other with elaborate dances and plumage displays. Eventually, they'll all pair up and then the entire flock will gather for a coordinated "march," walking as a group from one end of the exhibit to the other—necks sticking up high; heads moving from side to side.

By human standards, there is nothing heteronormative about these rituals. The flock here includes multiple couples where both flamingos are of the same sex. There's also somewhat of a love triangle going on: As Connair describes it, one female flamingo has two girlfriends, who both adore her but don't get along with each other.

"They're hanging out together, but it's not a very secure relationship at the moment," Connair says.

Naturally, a male and female flamingo need to copulate in order to produce an egg. But do the same-sex flamingo pairings copulate together? Lyngle-Cowand is unsure.

"I couldn't give you a definite answer on that. We're not observing the flock 24/7," she says. "We do see copulation out there on occasion, but not with all of our pairs. Sometimes, they might do it at night ... it's something I'd look into a little bit more."

As the sun shines down on the flamingo exhibit, a fight breaks out. Blue 60, the biggest and baddest bird in the exhibit, starts honking at Tan 24 and White 95, the lovely male couple who built the best nest of 2019. In a matter of moments, 60 manages to kick the two off their mud-made masterpiece and claim it as his own.

Connair watches it all go down, but doesn't intervene.

"He's one of my best-breeding birds. He and his female partner, they have raised so many chicks throughout the years. They're a really, really good pair, but they're kind of lazy nest-builders," Connair says of Blue 60 and his mate, Green 33, who've been together since 2011. "He can have whatever he wants, as long as he stays a good parent."

That could be a setback for Tan 24 and White 95, but their hard work has not gone unnoticed. According to Connair, a same-sex flamingo couple could easily be "foster parents" for a chick, since a flamingo doesn't bond with its chick until after the egg has hatched. If another couple isn't up to the task of taking care of an egg, Connair knows just who to give it to.

"They would make killer dads," she nods.