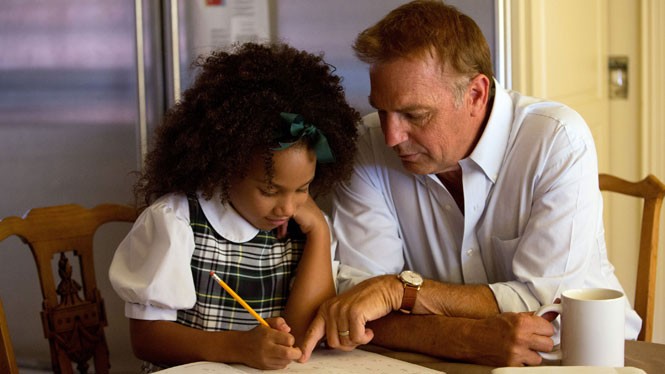 There are many reasons why a narrative can piss you off to the point where you can't see straight. Everyone's got their hot button, installed in uniquely sensitive areas of the psyche, whether it's a matter of politics, or misrepresentation of a particular demographic, or filmmakers expecting us to be far stupider than we actually are. Sometimes we're able to set those things aside. And sometimes—as is the case with Black or White—you find yourself wondering what the hell most of the people involved were thinking.

Black or White is worse than a movie that's merely tone-deaf about the issues of racial politics it raises; it's one where the filmmaker seems insanely confident that he's onto something really great. And writer/director Mike Binder has fashioned a huge pile of crap into the shape of a cake, expecting that we'll give him the blue ribbon in the bake-off.

There's a potentially compelling central character in Elliott Anderson (Kevin Costner), a successful attorney who has been raising his 7-year-old granddaughter, Eloise (Jillian Estell) with his wife, Carol (Jennifer Ehle), ever since their daughter died in childbirth. But, as the film opens, Carol has died in a car accident, leaving Elliott grief-stricken, turning frequently to alcohol for comfort and alone in raising Eloise. He gets an offer to help take care of Eloise from Rowena (Octavia Spencer), Eloise's other grandmother, but Elliott harbors a deep grudge against her son, Eloise's absentee, drug-addict father, Reggie (André Holland). So, when Elliott resists sharing custody, Rowena heads to the courts as her only recourse.

In a simpler movie, the only reason to be deeply irritated would be the way Binder reduces Carol to a mute angel appearing only in flashback and drunken fantasy, utterly wasting the gifted Ehle. But that decision gets a whole lot of competition from much of what Binder does, as he demonstrates the same sitcom-writer-trying-really-hard-to-be-significant sensibility that derailed his 2007 9/11-trauma dramedy Reign Over Me. Elliott hires as Eloise's math tutor, an over-achieving African immigrant (Mpho Koaho) who's always handing out fliers touting his credentials; Rowena frequently interrupts court proceedings with her sassy comebacks, somewhat undercutting the notion that she's a savvy, successful entrepreneur. Rowena even snaps her attorney (Anthony Mackie)—who's also her brother—into line by threatening to call their father. And the less said about the bizarre decision to set Elliott's visit to Rowena's South Central Los Angeles home to a music cue of Billy Joel's "Don't Ask Me Why," the better.

But by far the most aggravating element in Black or White is how oblivious it seems to be to its own casual brand of judgment. There's the potential for some ironic self-discovery in Elliott's disdain for Reggie's drug problem, despite his own obvious issue with a more socially acceptable addiction; Binder sets up a great moment where the two obviously intoxicated men square off in a physical confrontation that's as pathetic as it is dangerous. Yet Binder also never seems to seriously entertain the possibility that Elliott is just as much of a mess as Reggie. Elliott's drunken stumblings and hangover-addled attempts to get Eloise ready for school are played almost for laughs, while there's something sinister about the moments when we watch Reggie smoking crack with his friends. Costner continues his late-career maturing as an actor, capturing Elliott's seething anger, but he's practically fighting against Binder's inability to recognize that, yeah, Elliott kind of is a little bit of a racist, and how does he square that with raising his half-black granddaughter?

When it comes right down to it, though, Black or White isn't remotely interested in the tough question of what's best for Eloise. The thorny complexities of whether it's better for a black girl to grow up with upper-class private-school privilege or with more familial contact with black culture are more than Binder's willing to dive into. Eloise is simply a prop necessary for Elliott's personal growth, and the climacticcourtroom scenes merely a place for actors to give grandstanding speeches. It's a superficial and off-putting way to capitalize on an edgy premise, and it's hard to watch it tossed around casually by a filmmaker who seems to have no clue how to take it seriously.