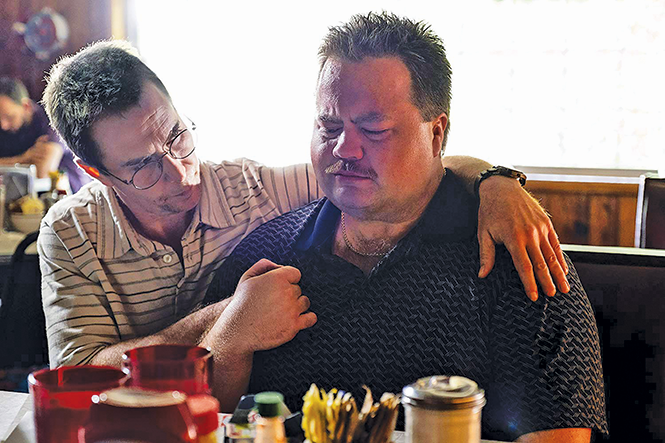 In a world increasingly defined by binary thinking, there is a phrase I have grown fond of using: Two things can both be true. This notion applies to Clint Eastwood's Richard Jewell—an account of the events surrounding the 1996 terrorist bombing at the Centennial Park of the Atlanta Olympic Games, and the subsequent suspicions cast on security guard Richard Jewell—because Eastwood clearly wants you to believe one thing: that Jewell's life was torn apart by the irresponsible behavior of FBI investigators and the American media. And you can believe that thesis, while still believing that Eastwood himself is being pretty irresponsible.

The set up established by Eastwood and screenwriter Billy Ray is tremendously effective, introducing Jewell (Paul Walter Hauser) in a way that makes it clear why he "fit the profile." A prologue set in 1986—with Jewell working at the Small Business Administration in Atlanta as a supply clerk, where he befriends co-worker/attorney Watson Bryant (Sam Rockwell)—establishes both Jewell's deep belief in authority and his desire to get into law enforcement. We also see him throwing his own authority around when he's employed as a campus security officer at a small college, part of a history of over-zealous policing. So it's at least somewhat understandable that FBI lead investigator Tom Shaw (Jon Hamm) hones in on Jewell as a suspect: a single guy, living with his mother (Kathy Bates), who might have planted the bomb himself in an attempt to turn himself into a hero by finding it.

Of course, Richard Jewell isn't ultimately about Jewell becoming a suspect, which would be understandable, but about how they attempted to railroad him. Eastwood and Ray focus on infuriating moments, like Shaw bringing in Jewell under the pretext of filming a how-to video for dealing with a terrorist scenario, and trying to get him to sign a waiver of his Miranda rights. Hamm plays Shaw not just as a Fed trying to catch his bad guy, even if he has to bend a few rules, but as an agent under pressure for being on the crime scene and not having any other suspect as the whole world watches. And, not to put too fine a point on it, but also as kind of a dick.

That's nothing, however, compared to the portrayal of Atlanta Journal-Constitution reporter Kathy Scruggs (Olivia Wilde), who ends up breaking the story of Jewell being a "person of interest" by getting Shaw to give her the info. How does she go about doing that? Why, by running her hand up and down Shaw's thigh, and none-too-subtly indicating that she is willing to have sex with him if he helps her get a story. It's only part of an overall portrait of Scruggs—who died in 2001, and therefore can't really challenge the allegations—as not only aggressive and maybe even flirtatious in pursuit of a story, but ethically over the line. Richard Jewell attempts to walk back its characterization a bit by having Scruggs shed a tear when Jewell's mother holds a news conference about how much they've been harmed by the allegations, but there's not much subtlety in the film's assessment that the press was actively malicious.

The shame of it is that the film's approach distracts from Hauser's terrific performance as Jewell. He perfectly captures a man whose own personality makes it harder for him to get a fair shake, even as the narrative makes it clear that being a "type" doesn't make you a criminal. Hauser's scenes with Rockwell, especially after Bryant becomes Jewell's attorney, are full of great character moments for both actors, finding dark comedy in Jewell's fundamental inability to keep his mouth shut.

The question here isn't whether Jewell was caught up in a hurricane of people desperately wanting to resolve a terrifying attack; it's the distinction between portraying the law-enforcement and journalists involved as careless, and portraying them as mustache-twirling villains, equally culpable as the actual bomber, Eric Rudolph. There's enough drama in how easy it is for someone to become demonized, even if everyone involved believes they're doing the right thing. Like the law enforcement agents this movie portrays, Richard Jewell needs to find someone to blame for what happened—and if it needs to cut a few corners to get there, hey, you gotta do what you gotta do.