The problem with massacres 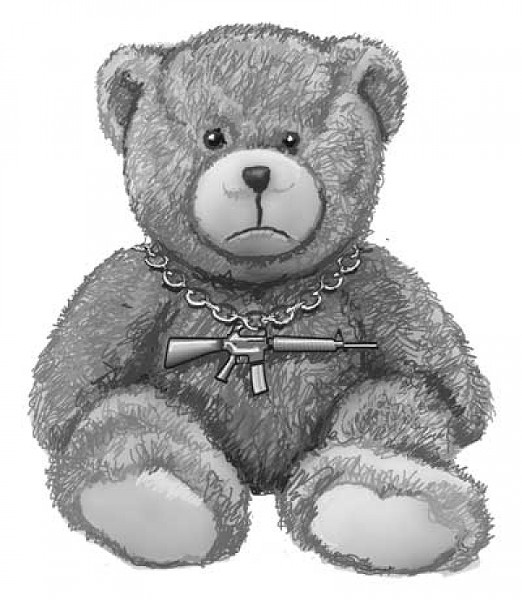 It is a disturbing sight to see: row upon row, stack upon stack, pile upon pile of cuddly teddy bears looking very despondent despite the bobbing multicolored balloons tethered to their furry little paws.


The teddy bears and balloons, along with ribbons and candles and handmade cards with crayon-scrawled condolences (LOVE, WE WILL NEVER FORGET, REST IN GOD’S PEACE, HOPE YOU ARE IN HEAVEN) have become a common spectacle in modern America, makeshift memorials to our fellow citizens massacred when they least suspect it, maybe while taking an algebra quiz or shaking hands with their congressional representative or while taking in the midnight showing of a movie premiere.


With no indication that the random slaughter will cease any time soon, we can expect to see more of these memorials: more teddy bears, more balloons, more candles, more ribbons, more homemade cards with their heartfelt messages. Unfortunately, the current economy being what it is, most Americans can ill afford to shell out discretionary income for the aforesaid items, especially teddy bears, which, as mourners have discovered, are not cheap.


It may be, as some spoilsports have alleged, that the expensive teddy bears and other constituents of massacre memorials have been subsidized by the National Rifle Association, the idea being that the touching memorials deflect our attention away from the real problem: As long as weaponry such as that employed by the orange-haired Batman shooter is readily available and easily purchased, we will continue to see our fellow Americans mowed down in a variety of venues. One minute you’re snacking on popcorn in your local cineplex, the next you’re blown away by the quiet loner in full-body armor.


According to the anti-NRA spoilsports, the teddy bears and balloons and crayon-scrawled condolences channel the emotions of the appalled populace into the easy sentiment of public grief, the mourners having been primed by NRA propaganda that “guns don’t kill people, people kill people,” which conveniently ignores the corollary that people ordinarily need guns to kill other people, especially if they intend to kill a slew of human beings from a safe distance.


Experts in the art of killing know that even if you want to off one or two or, at the most, three people, a firearm of some sort greatly expedites the procedure. Experts such as professional hitmen will tell you that it’s hard work to terminate human biological processes with your bare hands, let alone with a knife or garrote.


But whether or not the NRA is secretly financing the heartfelt memorials, the fact remains that the funds for teddy bears and balloons may not be inexhaustible. We may even find ourselves in the situation where there is a shortage of teddy bears. If this were to happen, the nation might find itself in a real pickle when the next mass shooting comes around. This would be bad news, not just for citizens looking to “make sense of the massacre” by producing makeshift memorials, but also for the NRA and all patriotic gun-toting Americans. Without the necessary constituent—teddy bears—of massacre memorials, the population at large might be forced to turn their attention to the real problem—that is, the huge arsenal of guns owned by law-abiding Americans.


Unable to help the victims to ascend to Heaven on a mountain of teddy bears, we survivors might have to ask ourselves how it was that our slaughtered fellows American were so violently dispatched in the first place. Maybe it’s all those guns out there—not just innocent handguns, but semi-automatic assault weapons, as well. Also, without the teddy-bear memorials to take up all the oxygen in the nation, we might have to turn our attention to the 80 or 90 people, give or take a few, killed by guns every day in America.


But we are getting a bit far afield. For the moment, we need to concentrate on an alternative to the teddy-bear memorials, specifically an alternative that will allow the NRA and its adherents to go about their daily lives without being pestered by people concerned about the appalling gun mayhem in America.


In all humility, I think I have a plan that will find favor among fervent firearm practitioners. After the next mass shooting, why not just leave the bloodied victims where they are for a day or two, and encourage folks to come out and take a look, perhaps even admire the efficiency of the bullets? No teddy bears, but you are free to bring balloons.