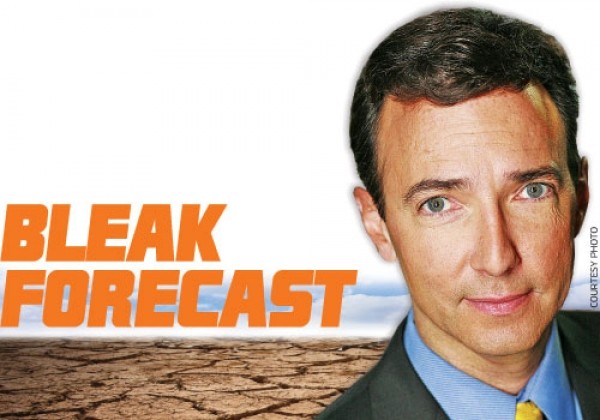 Paul Douglas is running against the mainstream grain in two significant ways.

One, he is Republican and acknowledges the reality of human-caused climate change. Republicans tend not to agree with the science, despite the overwhelming—97 percent —consensus among climatologists that human-created emissions are warming the planet, causing climate change—and triggering extreme weather.

For example, a Bloomberg national poll, released in early October, said that while “78 percent of Democrats and 56 percent of independents believe humans are warming the Earth … almost two out of three Republicans don’t.”

The second way the Minneapolis-based Douglas is running against the grain is that he’s a broadcast meteorologist, and the majority of people in his profession don’t necessarily acknowledge the level at which humans are causing climate change. According to a 2011 report by the George Mason University Center for Climate Change Communication, only 53 percent of broadcast meteorologists said that human influence plays an important role in climate change—with 34 percent saying climate change is a result of human and natural causes, and only 19 percent saying it is mostly human-caused.

Douglas would place himself in the latter category, the 19 percent-ers, adding that he believes “human activities, the burning of fossil fuels and a 40 percent spike in greenhouse gases are having an impact on warming the atmosphere and the oceans—where 90 percent of the warming has gone in the last four decades.”

The 2012 drought that hit North America will very likely be connected to climate change as well, but scientists, who are conservative by nature, are still totaling their data.

Who better than your local, trusted weathercaster to walk you through how climate change influences weather?

Lo and behold, Paul Douglas. Early this year, I discovered a blog wherein he argued that Republicans were wrongheaded to ignore climate change. Here’s a sample quote from this blog: “… some in my party believe the EPA and all those silly ‘global warming alarmists’ are going to get in the way of drilling and mining our way to prosperity. Well, we have good reason to be alarmed.”

Later in the year, Douglas wrote a direct message to Mitt Romney via Huffington Post, exhorting the Republican presidential candidate to acknowledge the reality of climate change, and impress upon his party the severity of our current predicament. In the article, he said, “If Mitt Romney is genuine about his promise to ‘help you and your family,’ he needs to acknowledge this, and work for a solution that will solve both the economic and the climate crisis.”

Douglas’ contrarian, clarifying view of climate change, along with his ability to educate viewers through his work as a broadcast meteorologist, can be seen on the 24-hour Weather Nation TV channel, which he founded in 2011.

We began our phone conversation a few weeks ago by me asking Douglas what got him interested in weather in the first place.

Paul Douglas: I’ve been fascinated with weather from a young age. Tropical Storm Agnes flooded out my house in Lancaster, Pa., back in ’72. I was a wide-eyed, 14-year-old Boy Scout. I had just taken a weather merit badge, and I was just traumatized … [by] the weather.

Many TV meteorologists were traumatized by something as kids—a tornado, a flood, a hurricane, lightning: Something put the fear of God in them. No one in their right mind, I think, sets out to be a television meteorologist. But I just fell in love with weather at the age of about 14, went to Penn State and got a degree in meteorology. ...

Jim Poyser: When did you begin to take note of climate change?

Douglas: All of us have different thresholds for when you acknowledge the science. For me, it was when James Hansen went before Congress in 1988. I thought he was jumping the gun; I didn’t see it. But after living the weather … and that’s what any meteorologist does: you live the weather … I just noticed in the mid and late ‘90s that something had changed.

Douglas: It was no longer my grandfather’s weather. The rain was falling with greater ferocity. We were seeing more extremes with greater frequency and greater intensity than I had ever witnessed in my career. So I started digging into the peer-reviewed science and basically came to the conclusion that climate scientists were probably right, that there’s just too much evidence.

The book of Luke says, “We are stewards and we will be accountable for our stewardship.” I take that seriously. When I talk to my friends on both sides of the aisle politically I say, “We’re accountable. You should care about this. If you care about your kids and your grandkids, as our parents cared for us, this is not only a scientific issue, it’s a moral issue and an ethical issue.”

There is something fundamentally immoral about kicking the can down the road and saying, “Well, not enough data and maybe it’s real, but our kids and our grandkids can clean up our mess.”

Our kids are going to be pissed, and I want to be able to look my kids in the eye and say, “You know what? Your old man did everything that he could to beat the drum and to let others know that this is real.”

We ignore the science at our long-term peril. People say, “Ah, you’re an alarmist, you’re a warmist.” I say, “You know, the trends are alarming, and I’m reporting on the trends. You either stick your head in the sand or you can acknowledge the science.”

JP: When did you begin to talk about climate change as part of your job as a broadcast meteorologist?

Douglas: In the late ’90s I began including it in my weather statements.

JP: Was anybody else doing it at that time?

Douglas: No, no. The pervasive feeling at the time was that … if you even mention the term “global warming” or “climate change,” you will instantly alienate 30 percent of your audience and they will tune out. So, you know, it’s kryptonite. My news directors at WCCO [the CBS affiliate in Minneapolis where Douglas worked until 2008] said, “As long as you focus on the science and don’t try to dig into policy implications—[and] if you’re reporting on the science, it’s peer-reviewed science that you can back up.”

Every day, I would get scores of e-mails like, “Flaming liberal. You crazy crackpot. Why are you buying into this Al Gore conspiracy? You’re going to cripple our economy.”

It is the equivalent of sticking your finger in the electrical socket. Most of us are conditioned to avoid pain, to avoid controversy. Everybody on television wants to be loved, and your contract—whether you’re renewed—really depends on your ability to attract an audience. Just by reporting on this, you know that you’re alienating people with a certain ideology. [To find out where a few local meteorologists stand on this topic, see “Weather Climate Controversy,” p. 12.]

This science, as strong as it is, is toxic to a lot of these people who just can’t or won’t accept peer-reviewed science because it does not fit in with their worldview. My entire life I’ve voted Republican and I’m a moderate Republican, which is kind of an oxymoron these days, but I’ve been very moderate in my beliefs. I’m fiscally conservative, socially liberal. It was amazing to me, the feedback.

JP: Yet you persisted.

Douglas: I persisted and I continue to persist because the subject is too important. I thought it was ludicrous that this was somehow a litmus test for conservatism. I remind my Republican friends that Teddy Roosevelt, staunch Republican, founded the National Parks Service. Richard Nixon, say what you will about Dick Nixon, and I’m not a huge Nixon fan, but he started the EPA. There is a history of environmental respect, respect for the environment.

“I’m proud of having been one of the first to recognize that state and national government have a duty to protect our natural resources from the damaging effects of pollution that can accompany industrial development.” You know who said that?