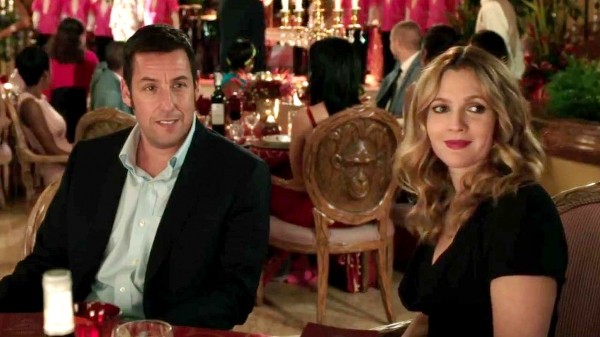 There’s a metaphor somewhere in the relationship at the center of Blended between Jim (Adam Sandler) and Lauren (Drew Barrymore). He’s a widower with three daughters who has no idea how to relate to the females around him; she’s a recently divorced mother of two boys who runs a closet-organizing service, taking disheveled areas and making them more orderly. It’s the Adam Sandler cinematic oeuvre in a nutshell: An oblivious, crude guy whose existence seems to need nothing more desperately than it needs a woman’s touch.

That woman’s touch has come almost exclusively from Barrymore over the course of Sandler’s movie career; she’s the only female legitimate co-lead he’s had in 20 years of his Happy Madison-produced comedies, with the possible exception of Winona Ryder in Mr. Deeds (and that’s stretching the definition). And those pairings—The Wedding Singer in 1998 and 50 First Dates in 2004—have been the better for her endearingly goofy presence, softening Sandler’s natural tendency toward aiming at the sense of humor of an audience that (at the risk of going full McConaughey) while he keeps getting older, they stay the same age.

So here we have Jim and Lauren starting off on a disastrous blind date, then winding up on together on a vacation in South Africa for blended families, sharing a suite and having everyone believe they’re actually a couple because … you know what, never mind trying to explain the logic by which this happens. Suffice it to say that Sandler has once again figured out a way to turn one of his movies into a studio-sponsored vacation, though the cameos from the usual gang of Sandler’s pals are limited to half a dozen or so. And the focus is actually on the two adults helping fill the voids in the lives of each other’s kids: Jim helping Lauren’s anxious younger son (Kyle Red Silverstein) finally learn how to hit a baseball, Lauren showing Jim’s tomboyish 15-year-old daughter (Bella Thorne) how to be a lady, etc.

It’s occasionally charming, in no small part thanks to the adorable Alyvia Alyn Lind as Jim’s youngest daughter. But there’s also something that Barrymore seems to bring out in Sandler, a thing that I’d call “sincerity” if that didn’t seem grossly inappropriate for any conversation involving Adam Sandler. Nor does the term “chemistry” really apply, at least in the romantic sense. It’s more like Barrymore has shown herself willing to be ridiculous for the cause of his movies—like flailing madly in the air when the car pulling her parasail runs out of gas—and as a result, Sandler has shown her the friendly respect of not indulging his willingness to tell the laziest possible joke in the laziest possible way.

And unlike most other recent Sandler comedies, the heart feels vaguely earned this time.

Blended starts to overstay its welcome once the families return from their African adventure, dragging toward the scene where everyone lives happily ever after. Yet while it’s hard not to wonder about the role played by the historically low standard of expectations for Sandler films, Blended ultimately feels … OK. It’s a pleasant thing watching these two performers together, even as it’s a frustrating thing watching the familiar Sandler nonsense get in the way. We can probably thank Drew Barrymore for being the muse who makes Adam Sandler put on his nice clothes every once in a while, limit his farting in public and generally act like a grown-up.