Blinded By the Light

Despite the noise and danger, people love their fireworks 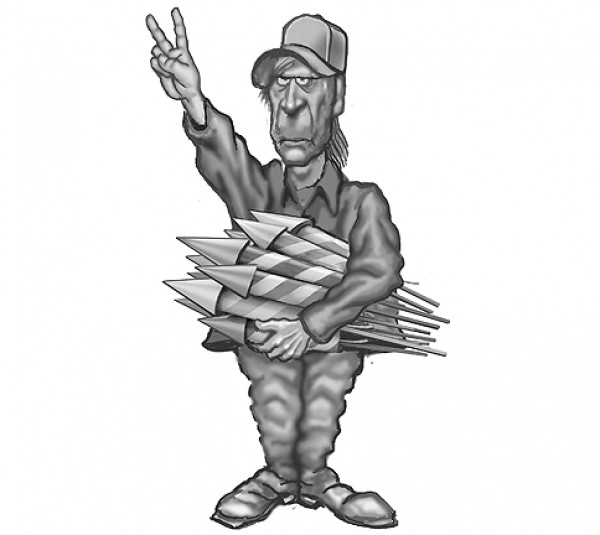 Modern fireworks are a bore. They start out loud and big and keep bursting and booming until they fall silent, like some berserk monster that has roared and snarled itself into exhaustion. Where do you go after beginning with the biggest bang possible? The succession of multiple orgasmic explosions soon grows tiresome. With no gradual low-key pyrotechnic foreplay, there’s no build-up to the satisfying big-finish climax. Instead, you are battered by the incessant BAM BAM BAM BAM BAM, and the only pleasure is the anti-climatic and abrupt cessation of the cacophonous,Â  blinding blitzkrieg in the night sky.

It was not always thus. We would climb up on the roof of the garage and gaze westward as the sky darkened. Just as the light seemed to have left the sky for good, a small red flash would bloom far in the distance, answered soon after by a starburst of yellow in another part of the valley, then followed by an unheard explosion of spidery white light where the fireworks had first started.

This was the annual dance of fireworks between Liberty Park and Derks Field, which had a kind of stately grace as the fireworks got bigger and rose higher, finally building to the finale of multiple bursts of light that expanded into the sky and streamed to earth. And instead of the modern barrage of bangs, all you heard were muffled pops lagging behind the lights.

That classic era of fireworks came to mind on the Fourth of July in Spring Mobile Park as I was deafened and blinded by the new and improved fireworks that are now obligatory here in Utah. In other parts of the country, fireworks have no doubt become louder and longer, but at least they are limited. Here, we seem to have an entire summer of bangs and booms; what’s worse is that everyone wants to get into the act, instead of leaving it to professional pyrotechnicians.

Fireworks now have to be up close and personal, and it’s obviously a lot more fun to set them off in your yard and risk blowing an arm or head off in the process. Despite posted signs in various areas of town prohibiting fireworks, various bozoes and buttheads proceed to set them off anyway, usually at two in the morning, and if you still have your hearing after the shattering explosions, you can hear doofus chuckles of appreciation: That’s so fucking cool, dude. Fucking awesome, man.

It’s never been clear to me why so many people get off on fireworks. One theory is that some people are so dull that they come to life only when explosions and blinding bursts of light give them a momentary rush of dopamine. These are the sort of pyromaniacs who demand stronger and stronger doses of pyrotechnics. Unfortunately, it is their bozo mentality that has carried the day and left the rest of us suffering in silence.

We grit our teeth and plug our ears until the season passes because it is somehow unpatriotic to deprive the pyromaniacs of their one pleasure in life.

But things might be changing. The local media managed to sneak in three stories that violated the taboo on not being completely enthusiastic about fireworks. The first story, on KUTV, was about local soldiers suffering from post-traumatic stress disorder who get flashbacks from the unrelenting barrage of fireworks during Utah’s season of patriotic celebration. For them, the bombs bursting in air are not a lot of fun.

The second story was actually the perennial one of pets totally freaked out by the constant fireworks. Cats cower and dogs light out for parts unknown as the booms and light show commence. If people aren’t all that sympathetic to war vets, you’d think they might at least have some fellow feeling for their sentient animal companions.

But if the trauma suffered by other living creatures doesn’t faze our fireworks enthusiasts, perhaps their own health might be of concern. The Salt Lake Tribune ran a couple of stories about the dangerous levels of particulate pollution during Pioneer Day pyrotechnics. The pollution level was five times greater than what is considered healthy, even for the hearty fireworks fans.

I wish I were more optimistic about the risks of fireworks making a dent in the psyches of our fanatic friends. This is unlikely, of course, since part of the fun of fireworks is risking a limb or two, even if it is your own.