Growing Pains: Considering the past and future of the reunited Blink-182. 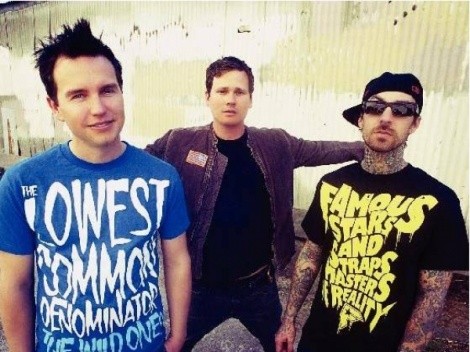 Listening to Blink-182 usually puts me in a good mood. Singing along with “Dumpweed,” however, makes me feel like a massive misogynist.

In this spirited, sprinting number from Enema of the State (1999), Blink’s best-selling CD, guitarist/vocalist Tom DeLonge discusses the opposite sex, a subject that figures into about 90 percent of the band’s material. After growing fed up with a controlling girlfriend and recalling some paternal advice, DeLonge decides that he’s going to bail on the relationship. Before that, he’s got a parting shot that he delivers as the chorus: “I need a girl that I can train.” Despite the sentence being a meat-headed, male-fantasy cop-out, the track is so irresistibly catchy that I (unsuccessfully) attempt to ignore the morals it bends and try to get along with the music. Though I’d normally heckle anyone else for that line and its line of thinking, Blink, somehow, gets a pass. Why? I’m not certain. It could be fondness and nostalgia clouding better judgment. I prefer to think of “Dumpweed” as another example of their crude, immature approach—an example in which they hadn’t grown up yet.

Roaring out of Southern California and hitting their apex as pop-punk exploded into the mainstream in the mid-’90s, Blink’s existence hinged on their youthful, frequently foolish exuberance. The trio played pop-punk with few frills, never attempting to mask their tuneful tendencies or reach any further than they had to. Antics included mocking boy bands, casting porn stars for their videos, streaking on-camera, cracking jokes that eighth graders would most appreciate, but they took their adolescent rebellion only to the point that they wouldn’t actually offend anybody. Appropriately, the group’s lone silver screen appearance was in the sophomoric American Pie: Blink watched teenagers fumble through a sexual encounter on a webcam, providing goofy reaction shots that culminated with an en masse “Holy shit!”

Beneath that puerility was songwriting adept at capturing the troubles and success of adolescence. Like a more commercialized version of the Ramones and their first few albums, Blink’s pop-punk songs were built out of teenage themes: “Reckless Abandon” trampled over suburbia, “First Date” was sheepishly sweet, “Mutt” lashed out against insincere relationships, and “Josie” made doe-eyed infatuation compelling. “Dammit,” in particular, remains Blink’s definitive composition. After assessing life post-break-up, it closes with a line fantastic in its coming-of-age simplicity: “I guess this is growing up.”

However, by 2003 and the release of their self-titled album, everyone in the band was well past their mid-20s. They decided to take on a gravitas that was pretty jarring. “I Miss You,” one of the singles, was corny and over-dramatic, the dark “Stockholm Syndrome” was based on World War II-era letters by the grandfather of bassist Mark Hoppus, and The Cure’s Robert Smith made an inexplicable cameo on “All of This.” Sure, the band still had some of their flair for hooks (they even rekindled their stupidity for “Feeling This”) but the overall tone was way too dour.

When the trio split because of internal problems in 2005, it was a downer but definitely seemed like a good stopping point for the project. Blink had a great career with a youthful voice, then tried maturity, but it didn’t work out all that well, and then they split up. Case closed. Now, reuniting after drummer Travis Barker escaped death in a plane crash, I’m certainly happy to see them back for old songs’ sake, but still, what does Blink have left to say?

“I don’t have any agenda with items I want to discuss or things I never got to do before,” responds Mark Hoppus in a phone conversation. “I just want to see how far we can go and keep making music that means something to us.”

When I found out that I was going to speak to Hoppus, I was overwhelmed with teenage zeal and hoping that he would say something unprintable. Unfortunately, for my 15-year-old self, it was about 10 a.m. his time and he was at home with his wife and kids. Plus, the guy is in his late 30s. Profanity seemed unlikely; on the contrary, Hoppus was polite and careful with his words.

His current objective is to “[take] what Blink was before I took a break and pushing it further from there, like we did at the last record: starting from one spot and not being satisfied with it.” The regrouped band has also apparently excised all ego problems. “There’s a lot of respect in the band for each other,” says the bassist. “People are really listening to what each other are saying and trying to understand each other. It’s a very positive feeling in the band right now.”

After touring, Blink-182 plans to record a new album. “Up All Night,” the only track they’ve developed thus far, is apparently very much in the vein of the self-titled album. I’m still not sold but, for the sake of my affection for the band, I suppose I’m willing to give maturity another shot. I guess this is growing up.