If Beale Street Could Talk effortlessly intertwines a love story with a tale of injustice. 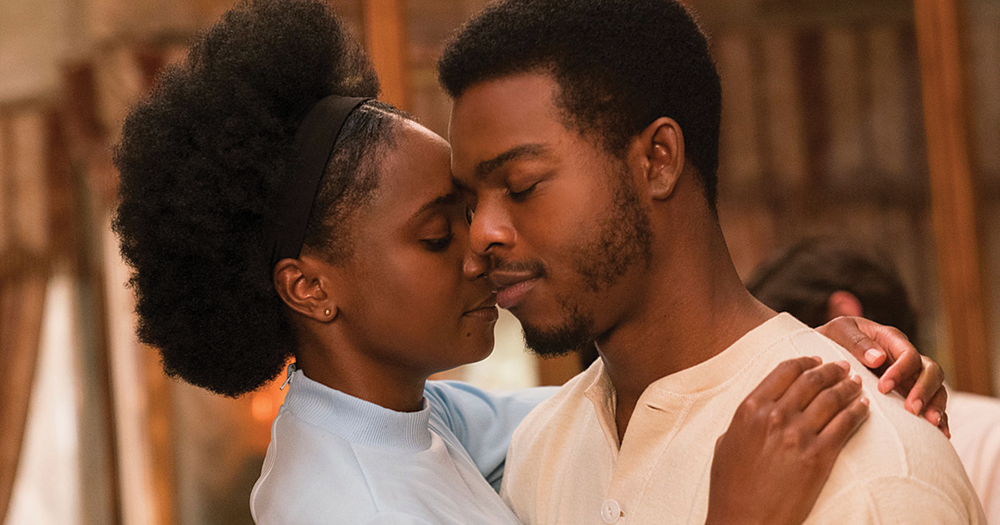 There is never any specific reference in Barry Jenkins' adaptation of James Baldwin's If Beale Street Could Talk as to when the movie's story takes place. Although the novel was first published in 1974, and the trappings of the film's Harlem setting—record players, no cell phones—indicate the past, the entire tale oozes with timelessness.

That's an essential component to the way If Beale Street Could Talk combines two ideas that simply shouldn't work together. On the one hand, it's a swooning romance, capturing a notion of True Love that transcends time. And on the other hand, it's a story of how institutional racism tries to destroy that love and works to divide families of color in America. If, as the film's prologue quote by Baldwin suggests, the story is about the way the black American experience has an essence not specific to geography, it's also about the way that experience has an essence not specific to time.

It opens with the simplest of moments, as our two lovers—19-year-old Tish (KiKi Layne) and 22-year-old would-be artist Fonny (Stephan James)—walk together hand in hand, with Nicholas Britell's lush and gorgeous score playing, and Jenkins peering down at them from a God's eye view through James Laxton's beautiful cinematography. They're making a commitment to one another after a lifetime growing up together as friends, but that commitment is about to collide with two huge changes: Fonny's arrest on trumped-up rape charges, and Tish's announcement that she's expecting their baby. From that moment, the narrative effectively splits, at times tracking back to the origins of their romance and their happy times together, then forward again to the time of Fonny's incarceration as Tish and her family work to clear his name.

Jenkins moves back and forth between those two timelines with grace and purpose, never allowing us to forget the cruel reality of the lovers' separation or the power of the feelings that hold them together. The latter is revealed most effectively in the scene where Tish and Fonny first consummate their relationship—and it's quite simply one of the most achingly lovely sex scenes ever shot. From the tentative undressing, to Fonny's gentlemanly offering of a blanket to Tish so she can cover herself while he puts on some music, to Fonny's not-too-subtle wondering about whether it was good for her, it's a magnificent melding of emotional performance, deft choreography and the kind of sexiness that comes from understanding the intensity of the connection between the people involved.

Moments like that one make it all the more potent when Beale Street scratches uncomfortably at the forces that will ultimately tear Tish and Fonny apart. You see them as we watch Fonny try to find a loft to rent, only to discover how much landlords don't want to rent to a black man. You see them in the conversation between Fonny and his ex-con friend Daniel (Brian Tyree Henry)—recently released after two years in prison on his own manufactured charges—as Daniel speaks with a haunted voice about how the experience has changed him. And you see them once it becomes clear why the white police officer (Ed Skrein) who identified Fonny as the rapist has a grudge against a black man who had the audacity to stand up to him.

While the fight to prove Fonny's innocence is the story's central conflict, Jenkins never builds it as a procedural, ticking-clock thriller. Even when the focus is on a trip by Tish's mother (the terrific Regina King) to Puerto Rico to find the assault victim (Emily Rios) and plead with her to recant her testimony, it's about compassion, and recognizing the times when people are so pounded down by oppression that they can break. The isolated moments when Jenkins stumbles in controlling his tone—notably the awkward family gathering in which Tish reveals her pregnancy to Fonny's disapproving, Bible-thumping mother (Aunjanue Ellis)—invariably give way to something powerful and resonant. A story about inhumanity only works if we grasp the humanity being stripped away; a love story only works when we're as invested in the hearts that pull them together as we are in the forces that pull them apart.