North Fish, South Fish: Find great sushi where you might not expect it. 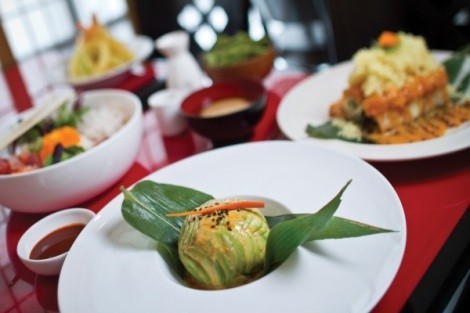 For those who made dietary resolutions for the new year, incorporating sushi into your master plan would probably spawn beneficial results. Of course, we’re not just talking about raw fish here, which can be a component of sushi, but isn’t necessarily. Sushi, remember, refers to the rice and method of preparing it with vinegar, sugar, water, etc. It typically comes in the form of the rolls (maki sushi) that are so popular, and nigiri, which is nothing more than a bite-size lump of sushi rice with raw fish on top. So, if you’re on a low-carb overhaul for 2011, it’s probably best to avoid sushi and stick with sashimi, with is raw fish sans the rice.

Trying to avoid the usual high-fat, high calorie, end-of-year holiday gluttony, I decided to close out 2010 by eating as much sushi as I could. And, my quest took me far and wide. Two of the more promising sushi spots I discovered are about an hour apart, north to south: Osaka Sushi in Layton, and Blue Fish Japanese Grill & Sushi Bar in South Jordan.

Thankfully, you won’t have to endure the Christmas music that wafted, annoyingly, through Blue Fish when I ate there during the holidays. The tepid tunes marred an otherwise very pleasant, contemporary atmosphere. The restaurant is located at The District in South Jordan, not far from the Megaplex theaters, making it a convenient place to drop in before or after a flick. It sports one of the larger sushi bars around—at least a couple of dozen seats, as well as table and booths.

Among the sushi-makers at Blue Fish is a pleasant young man from Indonesia, where they don’t eat sushi. But, they do in Seattle, which is where he was trained. Starting off with an eight-piece spicy tuna roll (minced maguro tossed in a zippy chili sauce with cucumber, $6.95), I was pleased to see that fresh ginger is supplied to customers, although not fresh wasabi. The nigiri and sashimi options are very standard—hamachi, saba, tako, sake, albacore, etc.—nothing unusual, but solid, traditional offerings. Likewise, Blue Fish tempts traditionalists with standard-issue rolls: Philadelphia, eel, California, shrimp tempura and so on ($4.45-$7.45).

However, things get interesting when you get to the “specialty roll” section of the menu. This, my friends, is where the good stuff resides. And, the Southern Comfort ($11.95) roll is brimming with good stuff: shrimp, avocado and tempura flakes encased in sushi rice and then wrapped with white fish on the outside, sprinkled with minced scallion greens and served with ponzu sauce and spicy sriracha. This single roll could easily suffice as a meal for one person, but I recommend sharing so as to afford the opportunity to try other rolls such as the Popcorn roll ($11.95) with fried scallop, eel sauce and spicy mayo, or the South Jordan roll with tuna, salmon, white fish, crab, kaiware (sprouted daikon radish seeds) and gobo (pickled burdock root).

However, my favorite Blue Fish roll is the Snow White, a gorgeous presentation of baked lobster, tempura-fried onion and avocado slices wrapped in rice and topped with nearly translucent pieces of raw escolar, finished with minced jalapeno, spicy mayo and chili sauce ($14.95). However, skip the lunchtime beef don ($7.95) which is a bowl of rice topped with too many sautéed onions and not-so-tender, thick strips of teriyaki beef, which is nearly impossible to eat with chopsticks and only slightly less difficult to tackle with a fork.

Head north to Davis County and I think you’ll be pleasantly surprised by the quality of sushi and service at Osaka Sushi. Or go west, where Osaka has just opened a second restaurant in Tooele. The vibe at the Layton location is super-friendly and welcoming and, like Blue Fish, contemporary in styling, although a bit more intimate, with a smaller sushi bar. The nigiri and sashimi offerings are a bit more interesting, however, with the usual suspects but also items like inari, surf clam, sea urchin, tamago and fresh water eel.

One of the more delightful dishes I’ve had lately is called an Avocado Bomb ($9.95). It’s soft-shell crab along with spicy tuna and spicy crab, pressed into a sphere about the size of a tennis ball and wrapped in slices of avocado, then topped with tobiko (flying fish roe) and gobo. Interestingly, I rarely see gobo in Japanese restaurants here—it’s an acquired taste—but encountered it both at Blue Fish and Osaka.

Another unusual dish comes from Korea—not surprisingly, since there are Korean chefs working at Osaka. It’s called bibimbap, and it’s an all-in-one sort of entree. I’m told bibimbap means “mixed rice,” which is apt since this was a large bowl of warm rice covered with a mix of salad greens and veggies and then topped with a sashimi assortment of raw salmon, tuna, hamachi and mackerel.

There’s also a pleasing soup selection at Osaka, perfect for cold-weather lunches. I thoroughly enjoyed my big bowl of tempura udon ($8.99), with thick udon noodles floating in a mild dashi broth, sprinkled with kombu and served with tempura-fried shrimp and veggies on the side. And, since you’re in the appropriate zip code, give the 84041 roll a try: yellowtail, cucumber and jalapeno slices on the inside, with spicy scallop and black tobiko on top ($14.50).

Both Blue Fish and Osaka have small, but serviceable wine lists (I suggest bringing your own), as well as imported and domestic beers and sake. So, heading either north or south, to Layton or South Jordan, you’re going to find sushi satisfaction.