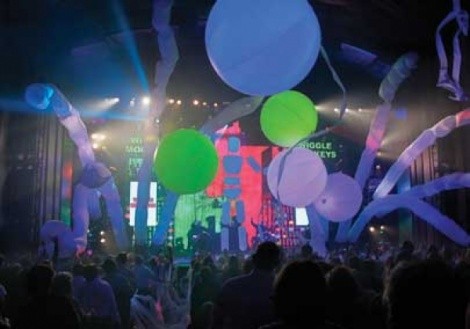 The puffy orb of a marshmallow arcs through space, seemingly in slow motion, lobbed from a blue hand to its intended target. All eyes follow the trajectory, and then, “whomp,” it lands, barely audibly, in an open mouth. Then another, and another, and soon 20 in total.

It’s just another day at the “office” for Kirk Massey, a Blue Man in the huge entertainment corporation’s national tour. Different from your run-of-the-mill corporation, the Blue Man Group’s mission statement is concerned with things like fun, interactivity and willingness to make mistakes. That has certainly helped the group expand over the course of 20 years from an avant-garde theatrical group of bohemian weirdos to a worldwide phenomenon, including five U.S. city residencies—with more in Europe—for the comedy/music/theater hybrid show, plus an arts-centric elementary school in New York City, the national tour and other projects.

The founding Blue Men—Chris Wink, Matt Goldman and Phil Stanton—now take on administrative and creative roles in the company, which makes casting the new wave of Blue vital. Actors-cum-musicians like Massey need not have prior experience using digital props, painting massive canvases, creating percussive instruments out of PVC pipe or catching 20 marshmallows—they learn to do that during four to six weeks of training, spending hours flinging bucketfuls of the sugary pillows at each other, Massey says. But applicants must have a certain je ne sais quoi.

From BlueManCasting.com: “The Blue Man character is a mystical, magical, mute being—a hero and a clown, a child and a shaman that defies description as readily as it welcomes speculation. Those who best articulate what is required to channel the spirit of the character are the Blue Men themselves.”

“We want people that have that trickster or jokester mentality about them—really energetic and childish,” Massey says. He, like the others, also meets the strict criteria for height, build and musical and acting background.

These folks are cast as the central role—the Ambassadors of Fun, so to speak—to create a deeper connection with the audience, break down the fourth wall and make the shows interactive. The odd thing, though, is this: The Blue Men are anonymous (there is no Kirk Massey during a show), which, in a way, helps the audience connect—however counterintuitive that is.

“There’s nothing that would create social masks—by labeling the Blue Men ‘short’ or ‘tall’ or ‘orange’ or ‘purple.’ We strip away all of that—even voice and language. We hope what people take away is to not judge, but to see things like a child, like a Blue Man,” Massey says, adding this is why the anonymity works. “It’s about creating a community filled with music, art and science.”

By creating such a world, if only for a night, the performance can be completely affected by the audience, Massey says, especially when people are brought onstage—there have been instances of someone running out of the venue, and even a woman recently attacking Massey. “She got a little freaked out, and her first reaction was to slap me in the face,” Massey says with a laugh.

“In a way, the show is a script of mistakes—it is a series of things that went wrong in the past that were actually really sweet,” he continues. “Whenever something goes really out there, the show becomes even more alive.”

This tour is alive with fresh material, which delves into the use and lampooning of new technology, including the smartphone culture. “We are taking that idea that our gadgets are making our world 2-D and playing with it,” Massey says.

To help bring the show to its climax, the three Blue Men are backed by a live band. It’s not a “rock star” gig, like drummer Jeff Wright had always dreamed of. “I never imagined myself playing for a theater show, like The Drowsy Chaperone or something,” he says with a laugh. But Wright loves playing for BMG because, again, it’s all about the connection.

“It’s between the musicians and the Blue Men, between action and music, between what’s onstage and the audience. You can’t just put on a show and expect a laugh. You have to take in what’s around you and react,” Wright says of the show’s subtle improvisations nightly. The touring production has a template, not a script, he adds.

And while the drumming isn’t exactly complex, it keeps Wright engaged. “We’re not covering [Rush’s] ‘YYZ’ or anything, but the parts are really unique.” And keeping it simple insulates BMG’s core belief of connection.

“Everybody has a foot tap or something. I think that’s why the Blue Man drums,” Massey says. “That’s the most basic, tribal form of communication or expression.” Plus, of course, everybody loves marshmallows.