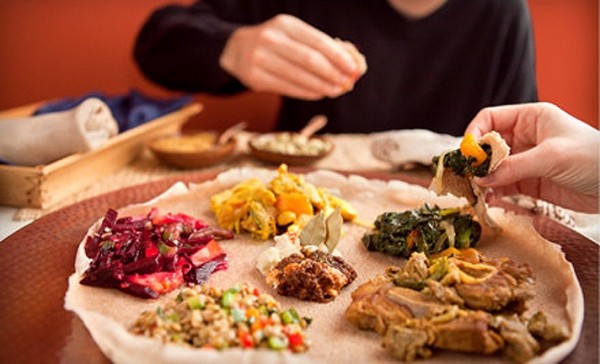 Anybody remember People Express? Back in the 1980s, when I was living in New York City, the budget airline People Express offered flights to Washington, D.C., and Boston for a mere $19 each way. You simply got on the plane and paid cash. Ah, those were the days! I’d fly up to Boston for games at Fenway Park, and down to D.C. to, ostensibly, spend a weekend with a college pal who lived in Washington’s Adams Morgan neighborhood, home to a large Ethiopian population. In reality, though, I was flying down to the nation’s capital to feed my addiction to Ethiopian food. There was then, and still are, an abundance of fantastic—and fantastically cheap—Ethiopian restaurants in D.C.; some estimates place the Ethiopian population of D.C. at a quarter-million. Those unique East African flavors quickly became among my favorites.

Well, for many years after moving to Utah, I pined for Ethiopian fare, but none was to be had. And now—in just the past year, amazingly—three different restaurants offering Ethiopian food have opened: Mahider Ethiopian Restaurant, Red Sea Cafe and Blue Nile Ethiopian Cuisine. Am I in heaven, or what? The focus this week is on the latter—Blue Nile—which is also the newest of the trio, having opened in early May.

Blue Nile Ethiopian Cuisine is located in the State Street space that was the home of Evergreen House Cafe, a longtime favorite of vegan and vegetarian diners. When you visit, you’ll be given a choice of seating options. There are standard, American-style restaurant tables and seating on the right side of the restaurant or, in a room on the left, you can choose to dine at one of three traditional Ethiopian tables: colorful, hourglass-shaped straw tables called messobs, which look sort of like African drums. They’re perfect for couples, although you can squeeze a third diner into your messob. Whichever dining option you choose, you’ll be eating with your hands, like in Ethiopia (although utensils are available by request). Ethiopian food is typically shared using the spongy, traditional “bread” called injera to scoop up meats, veggies, legumes and such. Yes, it’s a bit messy, but no more so than eating tacos, pizza and such with your mitts. It’s breaking bread together, literally.

I recommend starting with an appetizer called yemisir sambusa ($4.99). It’s a pair of triangle-shaped puff pastries stuffed with a delicious blend of brown lentils, onions, scallions, peppers, subtle spices and herbs. Ethiopian sambusa is very similar to the Indian samosa, and the yesiga sambusa ($5.99), which features minced beef instead of lentils, is also quite appealing.

The easiest and most economical way to sample a range of Ethiopian flavors and textures at Blue Nile is to select the value-priced combo plates. There is a vegetable combo ($9.99), which features five items from the vegetable menu, and a meat combo ($12.99), which offers three meat items. We ordered both. Each combo easily serves two people, and you’ll probably have leftovers. Since we chose to try both the meat and veggie combos, they came served together on one gigantic piece of injera, with more injera on the side.

Ethiopians are some of the friendliest, most generous people I’ve ever met. That’s true as well of Blue Nile, where the service was nothing short of loving. When I asked if they made their own injera (they do), co-owner Seyoum Abebe came to our table with a framed teff plant to show us. Teff (also called tef) is a species of lovegrass native to the northern Ethiopian Highlands. Similar to buckwheat flour, its grains are used to make injera, which anchors virtually every Ethiopian meal. However, teff is very expensive to import from Africa, and Abebe found an Ethiopian immigrant who raises teff in Idaho. Due to Utah’s arid climate, at Blue Nile they add a little brown-rice flour to achieve the spongy, airy consistency you’d find in Africa, and the bread takes an entire day to rise.

So, most dishes you order at Blue Nile will come served upon big rounds of injera. The meat portion of our combo plate included kay wat, yesiga alicha and doro wot. These are small cubes of tender prime beef that are sauteed in Ethiopian clarified butter and served in a tangy sauce (kay wat); chicken legs simmered in a spicy sauce similar to Indian curry and served, traditionally, with a hard-boiled egg (doro wot); and more beef chunks served in a mild sauce tasting of coriander (yesiga alicha). Although a lot of Ethiopian food is infused with curry-style flavors, I find it to be milder, overall, than Indian versions.

Lentils and split peas are cornerstones of Ethiopian cooking, as you’ll discover with the Blue Nile vegetable combo plate, which includes tegabino shiro, yemisir wot, ater alicha, gomen and atkilt alicha. Of these, we especially liked the pureed split peas with spices, onions and garlic (tegabino shiro); gomen—which was fresh, crunchy collard greens simmered in a very mild sauce; and especially yemisir wot, which is split lentils simmered in a zippy, curry-style hot sauce. The only item that missed the mark was tepid, limp green beans with carrots (atkilt alicha).

Navigating the Blue Nile’s beverage choices is … interesting. There are sodas and tea, Ethiopian coffee, juice (mango and pineapple), along with a few domestic and imported beers and wine—well, sort of. They were temporarily out of Tej Ethiopian honey wine, which we’d hoped to try. So, I asked about regular wine. The only option was “red,” so I ordered a glass ($5). It came ice cold—not just the glass, but the red wine itself. If you’d like to drink wine at Blue Nile, I recommend bringing your own and paying the $5 corkage fee.

Personally, I’m thrilled that Ethiopian cuisine has finally made its way to Salt Lake City. For a warm and delightful introduction to Ethiopian food and culture, I strongly suggest the Blue Nile adventure.