Guy Ritchie's The Gentlemen mixes a slick crime caper with a Brexit metaphor. 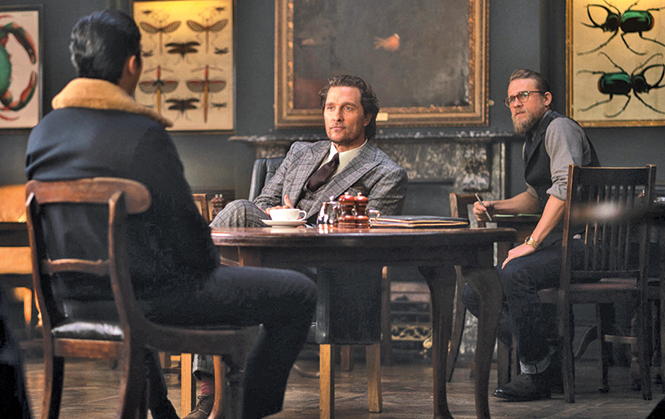 Once upon a time—in my review of 2008's RocknRolla—I wrote "Guy Ritchie would surprise us if he surprised us." I was alluding to his then-seeming dedication totelling blackly comedic stories about modern-day London criminals (as if that were a bad thing). Clearly, though, this was not a steadfast dedication, given hissubsequent attempts to turn a towering figure of myth into a London street rat, in King Arthur: Legend of the Sword, and his inexplicable (though, perhaps,blessed) lack of an attempt to deal with Disney's Aladdin as the street rat he has always been in last year's live-action remake of the Disney animated musical.

All of which is to say: Ritchie is, thank Christ, back on the beat of modern-day London criminals with his latest, The Gentlemen. And not only is this a downright relief—surprises are sometimes overrated—but as Ritchie ups his game with the subgenre here, the result is a hilariously sublime example of the crime comedy as a mirroron the legit world. It's full of sufficiently-advanced crime and criminals barely indistinguishable from legitimate business and entrepreneurs, and oozing with crackling cynicism about culture and politics. Oh, and movies themselves come in for a snarky smackdown. Laugh until you cry, film nerds!

Behold the ultimate unreliable narrator: oily, disgusting London journalist Fletcher, as gloriously embodied by Hugh Grant, continuing his own recent quest to ensure thatthe entire planet knows that he no longer gives the tiniest fuck about anyone or anything. The Gentlemen focuses on his scheme to extort a boatload of cash fromdrug dealer and American expat Mickey Pearson (Matthew McConaughey), via his lieutenant and British lackey, Ray (Charlie Hunnam). A London tabloidhas hired Fletcher to dig up dirt on Mickey, which he does—and then some—but the sleazy writer is willing to hand it all over to Mickey & Co., in exchangefor a very reasonable eight-figure honorarium.

And so The Gentlemen is nothing more and nothing less than Fletcher relating to Ray all the dirt he has on Mickey's business, in feloniously delightful narrative form.But that means we never know which bits of it we should accept as accurate, and which bits are arrant nonsense whipped up to sell newspapers and generate onlineclicks—or, indeed, to beef up a movie. Additionally, Fletcher has, at the ready, a screenplay about Mickey's extralegal exploits—also available for sale to the highest bidder.Is anything Fletcher relates to Ray or to us actually "true"? Or is it just fodder for the morons listening—and paying? Are we not entertained?

Oh, but it all gets so much better. We probably can take at face value the information that Mickey's illicit-drug business is entirely in marijuana, and that he isconsidering buyout offers. After all, weed's surely going to be legal quite soon. The fine line between criminal and legit has never beenquite this fine since Prohibition, and everyone here knows it. Did I mention there are Russians interested in Mickey's enterprise?

There is the real meta of The Gentlemen: not the self-referential movie stuff, but the bald, unapologetic fact that all of this is a metaphor for Brexit,the U.K.'s suicidal determination to departthe umbrella protection of the European Union and leave itself open to exploitation from, ahem, other powerful forces. It's onetime conspiracy theory as 21st-centurygeopolitics. With a sleazy faux-respectability that, perhaps, only the likes of McConaughey could bring, Mickey takes advantage, with only muted glee, of British aristocratic delusions about the nation's place in the post-colonial world to further his business. I'm not gonna spoil, but this is some seriously anti–Downton Abbeycrap. And now Russians are honing in on it? At best, it's another American (Jeremy Strong) who will be owning this big venture on British soil. Damn, this is some coldshit from a British filmmaker, but it ain't inaccurate.

Still, never fear! There is plenty of movie-movie distraction to be had. Here is new big-screen heartthrob Henry Golding (Last Christmas and Crazy Rich Asians) asa nasty, dumb comic-relief villain. Behold Colin Farrell defying expectations as a tough guy who (redacted). It's all just silly cinematic fun. With nothing that makes you laugh about the real world lest you cry! Of course it is.