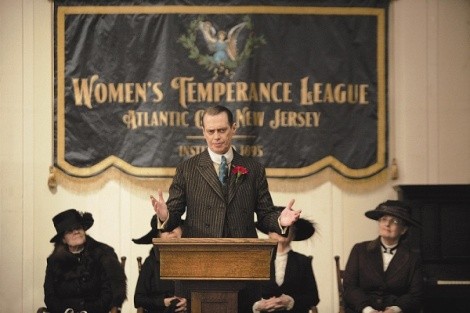 Boardwalk Empire: Season 1
Politician/bootlegger “Nucky” Thompson (Steve Buscemi) cashes in on Prohibition in 1920s Atlantic City in the epic HBO series that should serve as a cautionary tale against involving government with liquor. But, of course, won’t. (HBO)

Killer Elite
As he always is, a former special-ops agent (Jason Statham) is blackmailed out of retirement when his old partner (Robert DeNiro) is kidnapped by terrorists, and he has to battle Clive Owen and his mustache for his freedom. (Universal)

Pacific Blue: The Complete Series
All five seasons of the 1996-2000 “Baywatch on bikes” cop series, finally on DVD! The Pacific Blue bike unit lays down the law on the mean beaches of Santa Monica, with only a thin layer of spandex between them and all-out crime! (Digital1Stop)

What’s Your Number?
A kooky single gal (kooky Anna Faris) goes back through all 20 of the exes she’s slept with in order to find her One True Love, when Mr. Right is really a dirtbag musician (Chris Evans) who bangs new women nightly across the hall. Awww … (Fox)