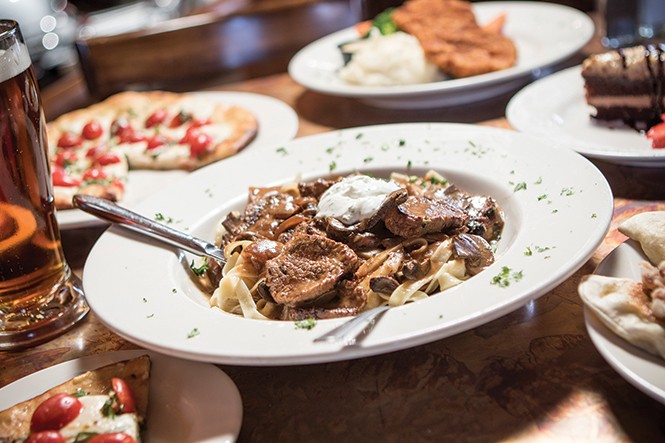 Recent visits to Bohemian Brewery & Grill caused me to delve into the vast City Weekly archives. I couldn't for the life of me recall when the Midvale brewery and restaurant had opened. As it turns out, it was in 2001 when Joe Petras and his family opened the brewery—much earlier than I'd thought. That's evidence of Bohemian's staying power.

Other establishments, including Hunters Lodge, Avalanche Brewery and Brookhaven Brewery, didn't fare so well at the Midvale location on Fort Union Boulevard. But if the throngs waiting for a patio seat—even on a weeknight—are any indication, the brewery is likely to be around for another 15 years and beyond.

Much of the interior still has the rustic log décor and cozy, warm ambiance of Angelo Degenhardt's original Hunters Lodge, especially the bar area where regulars tend to congregate. The exterior looks like a large wood cabin, and deer antler chandeliers hang from the ceilings. But there have been updates, too, like the modern patio, wood-fired pizza oven and fresh hops growing outside. It's a terrific mix of Old- and New World, with a menu and brews that lean toward the former.

The restaurant is first and foremost about beer; you'll come for the brews and stay for the food. As local hopheads already know, Bohemian is heaven for lager lovers. That's their specialty. It takes time to brew lagers, and brewers Brian Ericksen and Paul Konopelski do it the old-fashioned way: slowly.

Beer geeks know that lagers are brewed with bottom-fermenting yeast, while ale is produced with top-fermenting yeast. But that's only part of the story. The biggest difference between ales and lagers is the temperature at which fermentation takes place. Bottom-fermenting yeast is fragile, and must be treated with kid gloves, cool temperatures and a lengthy fermentation process, resulting in mellow but full-bodied beers with better clarification and fewer esters than are found in most ales. Lagers are crisp, subtle and less fruity than ales—the product of a somewhat high-wire brewing act. They are, without question, my favorite beers; think elegant, classy French white Burgundy versus oaky, in-your-face, bombastic California chardonnay.

Without getting too geeky and technical, Bohemian lagers are brewed with a unique "double decoction" process, which is the method used by many brewers in the Czech Republic and Germany (this is a good thing). It, like lagering itself, requires extra time and is labor-intensive, but the brewers here don't cut corners. Your palate will thank them.

As might be deduced from the name of the restaurant, their beers are an ode to the Czech Republic, where Joe Petras is from. Their signature beer is their "Old School" 1842 Czech Style Pilsener, which takes its name from the Bohemian city of Pilsen, where the first Czech Pilsener was brewed. You can find this luscious lager on draft at the brewery, and at local convenience and grocery stores in six- and 12-packs. To me, the 1842 is the perfect partner for the restaurant's Eastern European-style pierogies and bratwurst plate ($15.75). Pierogies are Eastern Europe's answer to the ravioli: pastry pockets filled with dill-seasoned potatoes and cheese, topped with caramelized onions and bacon bits, and served with a dollop of dill sour cream on the side. If you'd prefer to eschew the brat—which comes with sauerkraut—there is a pierogi "teaser" appetizer of three pierogis for $7.50. Other great starts to pair with the pilsner include potato pancakes with apple sauce and sour cream ($7), roasted Gilroy garlic bulbs with tomato-basil tapenade ($7.75), or the killer buttermilk-soaked onion rings that are deep-fried with beer batter and served with house aioli ($6.75).

Bohemian specializes in Old World continental fare like chicken or pork schnitzel ($16.75), chicken paprikash ($17), goulash ($16.50) and heavenly beef stroganoff ($18.95). However, the one dish I simply can't resist is their schweinshaxe ($18.50), a popular dish in Bavaria. There, it's usually made from the ham hock or "pork knuckle." Here, it's a beautiful Berkshire pork shank that is slow-braised until the meat comes off the bone just by looking at it. The tender, luscious pork is topped with a dark, rich onion pan sauce and served with red cabbage and a choice of mashed potatoes or spaetzle. Tip: Opt for the potatoes; the spaetzle is dry, under-seasoned and comes with no sauce. For me, a plate of schweinshaxen calls for a Bohemian Cherny Bock Schwarzbier—a dark, nearly black (schwarz is "black" in Czech) Northern Bavaria-style beer brimming with roasted malt aromas and hints of espresso and chocolate on the palate.

The wood-fired pizzas ($15-$16) are pretty good, too—although, when I tried the Margherita, the fresh mozzarella was just barely melted and the pie was topped with slices of fresh tomato. That's definitely not the tradition in Naples, where Margherita pizzas are defined by their slightly sweet San Marzano sauce. On the other hand, classic brewpub fish and chips ($17.95) are anything but routine here. Cold-water halibut pieces (three of them) are hand-dipped in seasoned pilsner batter and fried until beautifully crisp and golden. The fish is way above average in taste and texture; the garlic fries that accompany it are first-rate as well.

As they say at Bohemian, na zdravi! CW