Books | Edifice Complex: Salt Lake City: Then and Now profiles a city through what we’ve built, and torn down 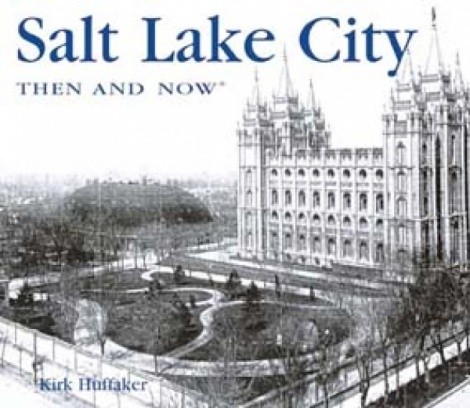 The history of Salt Lake City can basically be boiled down to this: The Mormons showed up and started building a town. Other types of people showed up and contributed to the mix. There were struggles and tough times along the way, but the capital city eventually emerged as a place with enough moxie to host an international Olympics, and it continues to evolve in new and interesting directions. It’s a story that can be told or viewed in a variety of ways.

Kirk Huffaker’s Salt Lake City: Then and Now, part of Thunder Bay Press’ series about American and world cities, illustrates this same story through the city’s architecture: The Mormons showed up and built some beautiful buildings. Other groups came along and built some more beautiful buildings. People of all faiths and backgrounds threw up some stunningly ugly buildings during the 1950s, ’60s and ’70s while also tearing down some very nice old buildings to create places to park cars, but recently, people have begun to realize that they’d be better off restoring some of the beautiful old buildings rather than tearing them down.

The story is told through historical photos juxtaposed with more recent shots of the exact same places, most of which were taken by David Watts. The images are coupled with brief texts of each location by Huffaker, the executive director of the Utah Heritage Foundation. The result is not only a coffee-table book with interesting photography, but a historical trip through the various stages of growth the city has gone through.

n n n n n The book includes landmarks such as the Salt Lake City LDS Temple, the Tabernacle, Cathedral of the Madeleine, etc., but also the histories of less well-known buildings such as the J.G. McDonald Chocolate Company building. It opened in 1901 as a candy factory, but reflecting the way the city has developed, now holds downtown, loft-style condominiums. Huffaker also uses views of the city as seen from the surrounding foothills or entire sections of major thoroughfares to illustrate how things have changed. The Broadway shopping district that once hosted the likes of Auerbach’s, Sears, J.C. Penney and Woolworth’s is now home to office towers and government buildings.

Huffaker doesn’t shy away from showing how “progress” was not always the result when old buildings were replaced with new ones. The Dooly Building—built of local red sandstone in 1892, complete with decorated cornice and arcaded piers—was demolished in 1964 to make way for what is now the Shilo Inn, a sort of eyesore that was all-too-common for that boxy era. That was also a time when the automobile was demanding its space in the city, which led to interesting buildings such as Albert Hale’s “commerical block” being torn down to make way for parking spaces.

There is a happy ending of sorts in that, as of late, Salt Lake City has begun to recognize that it might be better to restore historical buildings than to tear them down. Places such as Oquirrh School, Fort Douglas Officer’s Club and Peery Hotel are functional, up to code and, most importantly, pleasing to the eye while conveying a sense of history.

Nevertheless, it’s too late to see structures such as the original Salt Palace. Erected in 1899 by a coalition of local businessmen, it had salt crystals affixed to the outside to twinkle even at night thanks to a relatively new invention: the electric light bulb. Unfortunately, this combination dance hall, theater and exhibition hall burned down in 1910, was never rebuilt, and today is the site of a car dealership.

A city is ultimately nothing more than a geographic space. What the residents do with that space says a great deal about who they are and what makes their particular location unique. Salt Lake City: Then and Now provides both a visual and textual history of what we’ve done with our space.